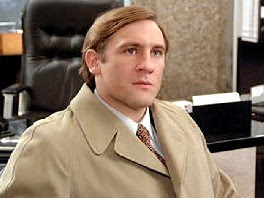 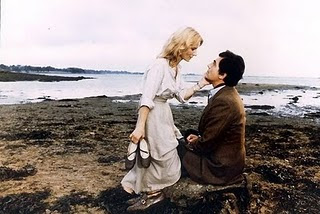 BATTLE OF THE SPECIES
by Douglas Messerli

Resnais' My American Uncle is often described as a "didactic" film, since it features the theories of French physician, writer, and philosopher Henri Laborit, who is interviewed from time to time throughout the film by the director himself. Yet, I would prefer to call it a film "structured" around psychological and philosophical ideas in the sense that Resnais' characters are not so much examples of Laborit's ideas, but are closer to living experiments of his theories in the manner that Resnais himself, at one point in the film, comically suggests: as human rats.
These "human rat" figures include René Ragueneau (Gérard Depardieu), Janine Garnier (Nicole Garcia), and Jean Le Gall (Roger Pierre), who each share a strong sense of individual identity, thwarted by family, friends, and the work place. René, born on a farm, is determined to leave home and become a financial success, and ultimately is hired as a textile executive; Janine, raised by a political active Communist family, wishes to become an actress; and Jean, born of a wealthy and well-placed family, seeks political power, becoming for a time the influential director of a state television station like RTF (Radiodiffusion-Télévision Française).
Given our current economic situation, Resnais' film seems very contemporary as all three of these individuals lose their jobs, coincidently becoming intertwined in their personal lives and situations. At one point in the film, Jean meets the actress Janine, falls in love with her, and leaves his wife. But their relationship, although filled with passion, flounders when he develops kidney stones. Meanwhile, his wife secretly approaches Janine asking her to allow her husband to return home, since she is near death. Janine, also feeling somewhat entrapped in the relationship, accordingly abandons Jean, but later discovers that the wife has been lying, and that she has now lost her former lover forever.
The painful encounter between them on Jean's family island, and his insistence that he is truly better off with his wife, suggests—as Laborit predicts—that she may react suicidally. Certainly, she seems to have no one or any belief system to turn to in her loneliness and sorrow. Yet Janine, who works now as a designer associated with René's textile company, remains strong, and, agrees with René's boss, that they must fire him as director of the textile firm. When René, who has worked loyally if somewhat unimaginatively all his life, discerns the situation, it is he—the solid Catholic family man, who attempts self-murder. He is saved by a telephone call from Janine shortly after he has tried to hang himself.
In short, if Laborit's predictions sometimes turn out to be correct, they are also miraculously thwarted by coincidence and chance, elements central to many of Resnais' films; and the human rats, accordingly prove more adaptable than imagined, suddenly forging fresh inter-relationships. Life, so Resnais suggests, may not always be a completely fulfilling and joyful experience, but, as these figures demonstrate, neither is anything truly predictable.
The fact is that all three of these individuals also live dream lives, lives of new possibility, represented in Resnais' film by clips from older movies starring Danielle Darrieux, Jean Marais, and Jean Gabin. Although human rats may behave selfishly, imposing their will upon others, although they can force each other to suffer pain or even death, as individuals they can also imagine themselves as someone else, as other beings filled with strength and grace.
Each of these figures also grew up in families that spoke of an "American uncle," a man who had left the world in which the rest of the family remained, a being who, for better or worse, richer or poorer, stood as a kind of talisman for difference or change. These kinds of dreams, these kinds of imaginative possibilities, Resnais makes clear, do not exist for rats. And so the tragedy is over even before it has begun.