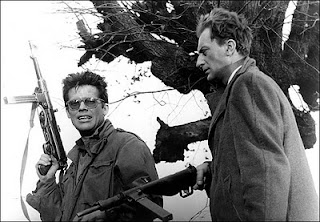 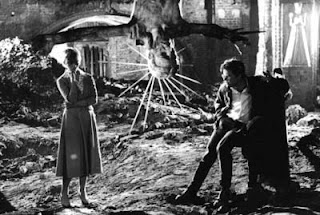 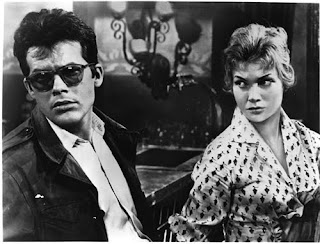 Wajda's masterwork, Ashes and Diamonds, begins in a seemingly bucolic world, with two men, Maciek Chelmicki (performed by the gifted actor Zbigniew Cybulski) and Andrzej (Adam Pawlikowski) lying on the ground near a small country chapel. A young girl is attempting to open the chapel door, and asks their help. Slowly the men, clearly exhausted, are roused, Maciek, in dark glasses, taking a long while to awaken. Suddenly another man signals them, a car is coming, and we recognize that we have misread the peaceful scene. The girl is sent off, and, as the car comes into view, Maciek and Andrzej ready their guns, brutally murdering driver and rider.
It is, as we discover later, a botched murder; the two killed were factory workers, not the Communist party leader Szczuka, whom the assassins were ordered to kill. Entering the nearby provincial city on the last day of World War II, the two meet up with a local contact, the secretary to the city's mayor, who gives information, but refuses to participate in their activities. While reporting on their success, Maciek overhears the arrival in small hotel of Szczuka, and realizes their mistake. There is no choice now but to finish the assignment, Maciek checking into a room next to Szczuka's.
Szczuka is in town to celebrate his return from the Russian front and the appointment of the mayor to a ministry position. The banquet is to be held in the hotel itself. Maciek and Andrzej seek out the hotel bar, where Maciek discovers a beautiful barmaid, Krystyna (Ewa Krzyzewska), and proceeds with a kind a crazed flirtation with her that in his behavior reminds one of a mix the American actors James Dean (Cybulski was later described as the "Polish James Dean") and Marlon Brando. He is clearly toying with danger, daring the world about him, a world where he has daily had to face death.
Both men have been part of the Polish underground, and now hope to defeat the rising Communist influence. Yet neither Andrzejewski's original novel nor Wajda's film side with either the partisans or the Communists. Although a formidable and bureaucratic-like figure (no match for the appealing Maciek), Szczuka has fought against Franco in the Spanish Civil War, and later warns of the dangers of "having power."
Andrzej is called away for further instructions, while Maciek determines the best moment to kill Szczuka is late at night, when the man has fallen asleep. In the meantime, he continues to woo Krystna, eventually seducing her into his room, where the couple celebrate their youth and sexuality at the very same moment that the banqueters celebrate their political futures and the townspeople the end of the war.
Throughout the long night, we begin to see that nothing in this celebratory world is quite right. Through Wajda's brilliantly surreal imagery, we witness a wooden image of Christ hanging upside down in a bombed-out church, a white horse loosed upon the streets. While Maciek and Krystna discover love, the banqueters grow drunker and drunker, ultimately throwing over any remnants of respectability and civility.
In this whirlwind of change, bringing both a corrupt new leadership and hopeful love, the young assassin is confused. He has never before disobeyed an order, but is now seemingly ready to give up his previous ways for the new possibilities of life—a life of young idealism he has never had the opportunity to experience.
Yet the system in which he has been living will not permit escape. Andrzej returns to remind Maciek of his duty.
As Szczuka awaits a car to take him to his son, arrested with a group of failed partisan rebels, Maciek shoots, killing Szczuka; the body falls forward into his own arms so that the two appear to be embracing death together, symbolizing the pact that the Polish people will ultimately make with the Communist forces.
Inside the banquet hall, the participants, worn out and drunk, demand the orchestra play Chopin's Polonaise in A flat: while the tired musicians perform a rendition that is hardly recognizable, the celebrants enact what appears more like a stuporous dance of death than a spirited polka.
Attempting to escape the city, Maciek, spotted by troops, is shot. Stumbling forward he finally reaches the dump at the town's edge, collapsing and convulsing, little by little, into death. Krystna, the diamond of his world, is forced to join in the devil's dance.
Wajda's great film may not openly take sides, but by comparing the death of the beautiful Maciek with the surreal polonaise, we know that Poland's future will not be a thing of beauty, that the ashes of World War II will fall over anything that shines.