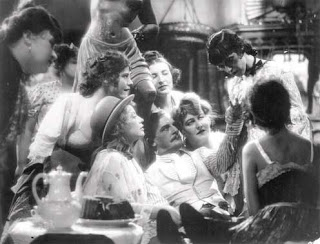 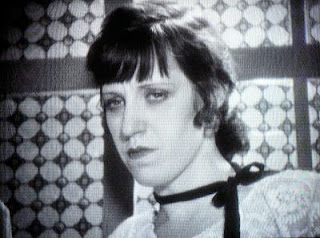 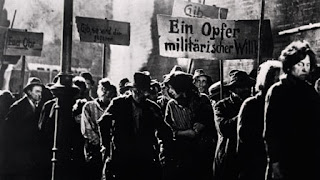 ABLE TO FORGET
by Douglas Messerli

Only that man survives
Who’s able to forget.—Kurt WeillG. W. Pabst’s expressionistic production of Brecht’s and Weill’s Threepenny Opera has many failings, and perhaps for the director’s excising of most of that work’s original songs, he deserved to be sued, as he was, by its creators; however, they lost the suit. Although the film contains a fair amount of dialogue and reproduces several of Weill’s noted songs, for the most part Pabst uses the tropes of silent film making, shooting many of his scenes in the melodramatic overstatement of a time before the “talkies.” He basically presents the songs, moreover, as dramatic commentary by the musical narrator.

Nonetheless, Pabst’s carefully framed sequences do capture the overall sense of the Brecht-Weill original, and the excellent performances by Carola Neher (as Polly), Rudolf Forster (as Mackie Messer) and Lotte Lenya (in her signature role of Jenny) redeem his rhetorical approach. In a sense, of course, the theatrical conventions used by Pabst recreate some of the Verfremdungseffekt (the alienating effects) of Brecht’s original.


For the first half of the musical, we go along with the suave manners of the anti-hero as the narrator sings of Mackie’s seemingly coincidental (and apparently unproveable) involvement in a series of robberies, murders, and sexual escapades. His clumsy wooing of Polly as he sweeps her into an underground bar were he intimidatingly stares down two men, a Laurel and Hardy-like pair who we later discover are his own henchmen, in order to take over their table, demonstrates his true temperament. The important thing in these scenes is that Polly appears to be a complete innocent about to become prey to Mackie’s machinations.


The hilarious preparations for the suddenly announced wedding between the two, including the arrest, soon after, of one of the gang members while carrying a wedding present of a stolen grandfather clock, ultimately reveals Mackie’s close friendship with the Chief of Police, Tiger-Brown.


No sooner has the viewer recovered from that revelation than the script lets us know that the innocent seeming Polly is the daughter of “the poorest of the poor,” the wealthy Beggar King. Suddenly Polly is wise to all of Mackie’s doings, asking outright: “Is all of this stolen, Mackie?”
Polly’s powerful explanation of why she has married Mackie is one of the high points of Pabst’s production:

You must be cold and heartless as you know
Or else all sort of things happen
You must say no.

But because Mackie has not offered any of the nice things a young lady in her position might expect, because he has been so crude and clumsy in his attempts at romance, she admits she had no choice this time ‘round, but to say yes: “You can’t be cold and heartless now!”


Discovering that his daughter has run away with Mackie, the Beggar King Peachum demands that Tiger-Brown bring him to justice, and when the Police Chief wavers, he threatens to interfere with the Queen’s coronation by organizing a staged protest by the beggars, who marching toward the Queen will be somewhat impervious from violent threats—after all, what will it say of the Royal family if the police heartlessly shoot down these poverty-stricken citizens as they attempt to “pay homage” to the Queen.


Hearing of her father’s intentions, Polly convinces Mackie that he must escape. And he, in turn, hands over the operation of his underworld activities to his wife. Returning to his prostitute friends, Mackie is betrayed by Jennie and, after several attempts at escape, is arrested. One of the best moments of this film is Mackie’s sudden appearance upon the brothel’s rooftop minutes before we observe his arms and hands maneuvering along the building’s drainpipe.


While Peachum plans his protests, Polly takes the gang’s ill gotten money and purchases a bank. Dressed now as bankers at a board meeting, Polly and the former gang members clearly demonstrate Brecht’s theorem that there is little difference between robbing a bank and controlling other’s money.


When Peachum’s wife announces that Polly and Mackie will be attending the coronation, sitting in the stands near where the Beggar King’s minions will attempt to interrupt the event, Peachum runs off to stop the march. Pabst’s brilliant presentation of their slow robot-like forward advance makes clear that Peachum has unleashed a monster in riling up the masses!


The Queen’s absolute terror in facing her people, moreover, explains everything, particularly the survival of those who can forget. In Pabst’s handling nearly all the action takes place while the screen goes dark, reiterating Weill’s observation: “Some men live in darkness, while others stand in light.”


At film’s end, Peachum also willfully forgets, joining forces with his banker-daughter and Mack the Knife. Together they will rule the world, the wealthy and the poor alike.