Jason Reitman | Up in the Air 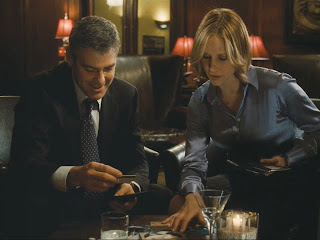 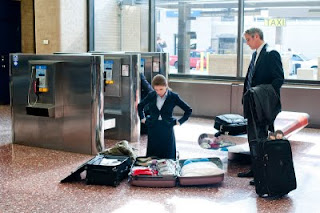 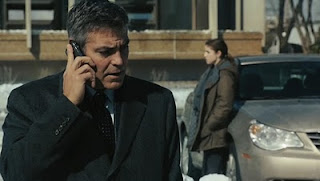 TRAVELER WITHOUT A BACKPACK
by Douglas Messerli

Jason Reitman and Sheldon Turner (screenplay), based on a novel by Walter Kirn, Jason Reitman (director) Up in the Air / 2009

One of the reasons that many people do not like to travel by air these days is the utter impersonality of the trip: the blandly imposing air terminals filled with rushing figures who are herded into lines where they are half undressed and released into the hands of mechanically-smiling stewardesses who hurry them into cramped little spaces where they are discouraged from moving until they reach their destination. Even assembly-line workers might experience more variance. Yet this anonymous world is just what the hero of the dark comedy Up in the Air desires. As Ryan Bingham (George Clooney) is described by several women in this film, he is a "man-child" with a phobia for interpersonal relationships. Marriage is clearly not for him. His big goal in life is flying enough miles to receive American Airlines' Ten Million-miler Executive Titanium card. At occasional motivational speeches Ryan teaches people how to travel light, to unload their backpacks, not simply of personal belongings, including their houses and cars, but to free themselves of friends, family, even their husbands and wives:

The slower we move the faster we die. Make no mistake, moving
is living. Some animals were meant to carry each other to live
symbiotically over a lifetime. Star crossed lovers, monogamous swans.
We are not swans. We are sharks.