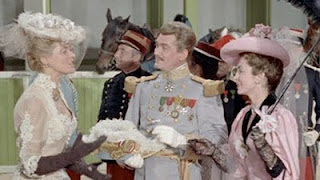 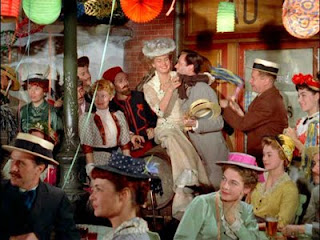 THE THEATER OF LOVE
by Douglas Messerli

The third of Renoir's trilogies about theatrical life, is subtitled a "musicale fantastique," and indeed, Elena et les hommes plays out, this time using the background of pre-World War I French politics, a kind of fantastic series of musical interludes, dominated by a street song tribute (sung by Marjane) to Paris and French life.
At the center of this farce is a beautiful Polish Countess, Elena Sokorwska (a stunning Ingrid Bergman), who, despite her poverty, pretends a life of great wealth. She is about to marry a wealthy boot-manufacturer, Martin-Michaud (Pierre Bertin), but a few days before the event, lured into the streets by the celebration for Général François Rollan (Jean Marais), she encounters Le comte Henri de Chevincourt (Mel Ferrer) who clearly wins her heart. He, in turn, introduces her to Rollan, whereupon, a love triangle is immediately established, continuing a few days later in the country house of Martin-Michaud, whose son, also about to be married, carries on with the servants, while Elena shifts her lovers from room to room—an hilarious series of frames that immediately recalls Renoir's earlier film, Rules of the Game. While that satire, however, had serious consequences, Elena, although occasionally suggesting the state of the nation is at stake, it represents more a theater of the heart than a theater of war; and Renoir seems determined to move entirely out of the realm of realism by ultimately encamping the three in a whore house, surrounded by the police, gypsies, and Rollan's adoring public.
In order to help Rollan escape, Henri must stand in for Elena's lover, as they kiss before a window with the crowds watching below. Elena is, at first, angry with his behavior, but gradually she warms up to his amorous embraces as the crowd is transformed, like beings out of "A Midsummer Night's Dream," into a kissing and embracing tangle of bodies.
Some critics, particularly The New York Times's Bosley Crowther, were outraged by what they saw as an inferior Renoir film. Crowther blamed Warner Brothers executives as having interfered with the cutting: "How this fiasco could have happened is difficult to explain." The work, alternated, he declared, between a romantic drama and a slapstick farce. Jack Warner himself had complained that he found Renoir's plot incomprehensible.*
In fact, Elena et les hommes is a farce from beginning to end, like the films that came before, it is a work that embraces the love of all things theatrical, realities larger than life. Accordingly, the film is also movingly romantic; "Was there ever a more sensuous actress in the movies?" asks Roger Ebert of Ingrid Bergman. Jean Marais is a dashing hero, Henri a handsome lover, and the two of them keep the forceful Elena from having to deal intensely with the reality of her existence. Together they help her rush bravely forward into territory where angels fear to tread, and ultimately reward her with a fabulous life of fiction as opposed to a shabby existence with a venal businessman.
Once again, Renoir celebrates romance over the ordinary, the fantastic over the real, sex over frozen commitment.

__________
*To give Crowther his due, the version he probably saw was the American editing, Paris Does Strange Things, which Renoir disavowed as his own work.
Los Angeles, April 29, 2010
Copyright (c) 2010 by International Cinema Review and Douglas Messerli.
Posted by greenintegerblog at 7:51 AM