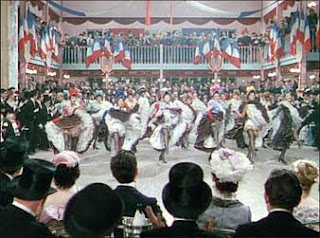 RECREATING THE PAST
by Douglas Messerli

It might be fascinating some day to compare and contrast the various versions of films centered around Montmartre's famed Moulin Rouge and the various figures involved—from John Houston's 1952 Moulin Rouge, focusing on the life of Toulouse-Lautrec, to Renoir's French Cancan of two years later, from the 1960 stage-inspired film musical Can-Can to Baz Luhrmann's extravaganza of 2001, also titled Moulin Rouge. All of them perhaps have the word excess in common. Moreover, it is quite revealing to compare Renoir's love-letter to Parisian bohemian life and Walter Lang's rather insipid movie tribute to a dance: while in the American version, the can-can is presented as a revolutionary, scandalous dance fought by the forces of moral reform, Renoir treats the same as a revival of an old fashioned dance that faces only the obstacles of love and money. For the Americans, accordingly, the cancan represents a radical step forward in sexual freedom, while Renoir's French Cancan is a recreation of a romanticized past.

In my estimation, however, only Renoir's movie represents truly great film-making. Unlike the other versions, fettered by psychological revelations, ridiculous turns of plot, and casts of thousands, French Cancan almost entirely dispenses with story in order to present the viewer with a spectacularly colorful image of a bygone era.
Henri Danglard (wonderfully played by Jean Gabin) is a down-on-his-luck owner of a small club featuring his lover, Lola de Castro de la Fuente de Espramadura "La Belle Abbesse," a lovely but somewhat talentless belly dancer. One night, slumming it, as we might describe it today, Danglard, "La Belle Abbesse," and friends visit a small Montmartre café where the locals still dance the cancan and other peasant-like trots.
Spotting a beautiful young laundress, Nini (Françoise Amoul) in the crowd, Danglard dances with her, angering his lover, who quickly begins a fight, but not before Danglard arranges a meeting with Nini for the next day.
The impresario suddenly has an idea; he will build a new club, the Moulin Rouge, in Montmartre and reintroduce the cancan as the French cancan, attracting just such people as he and his friends to a safe haven in a somewhat rough, down-and-out neighborhood, alluring his customers by hinting, as the Follies Bergère hand and later Ziegfeld follies would, at sexual licentiousness. From the beginning we know that the place is destined to be a great success!
The only other events that occur are those which center around Lola's jealousness and revenge, the difficulties in raising enough money for the venture, and Danglard's inevitable romancing of Nini, frustrated by her love for her innocent boyfriend and the attentions of Prince Alexandre (Giani Esposito).
We know from the start, however, that eventually things will take care of themselves and that Danglard will have his way: the Moulin Rouge will eventually open; and Renoir speedily takes care of any fragments of the plot so that he can devote the rest of his film to a spectacularly visual recreation of the theatrical event, not perhaps as dizzyingly over-the-top as Luhrmann's massive choruses of shifting torsos, arms, and legs, but still a splendidly beautiful series of performances of whistling, singing (by the incomparable Edith Piaf), and, after removing the onscreen audience, chairs, and tables, presenting an exuberant cancan.
In this, the second of the director's trilogy about love and art, Renoir, not only captures a past world, but seems to call out for a time gone when art was at the center of living, was one of its major avocations. Love may be beautiful, he argues, but it is, even for "La Belle Abbesse" and the randy Dangland, only a past time; art, music, dance, literature, these are the forces that keep one alive! Will Nini find happiness? Will her boyfriend, who has refused to accept her if she sets foot upon the stage, be able forgive her? In Renoir's nostalgic creation, it doesn't matter, for Nini has had the joy of performing, an act that transforms life. Living is, after all, so much less interesting!