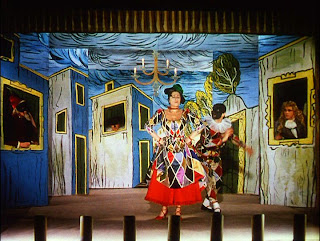 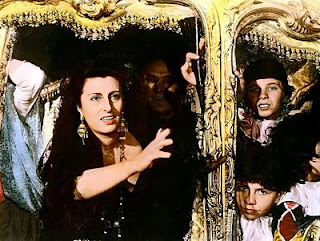 Jean Renoir, Jack Kirkland, Renzo Avanzo, and Giulio Macchi (writers, based on a play by Prosper Mérimée), Jean Renoir (director) Le Carosse d'Or (The Golden Coach) / 1952, released in the US in 1954

Into a backwater Peruvian town of the eighteenth century come an Italian commedia dell'arte troupe, promised a theater and hotel rooms. The local inn has neither and the inn keeper is determined to keep 60% of their profits. Fortunately, they have traveled with their star's, Camilla (played by Anna Magnani), lover, Don Antonio (Odoardo Spadaro), who demands and gets a fairer share.
Their first performance is a near-failure, as the inattentive audience members—most of whom have not been asked to pay—sell and buy goods and applaud and shout at the arrival of the local toreador (Riccardo Rioli). But by the end of the play, Ramon has also been smitten by Camilla.
Next door lives Ferdinand, the Viceroy—whose overdressed mistress and bewigged ministers and servants clearly bore him—overhears the theatergoers applause, which intrigues him enough to invite the theater company to perform in his home, despite his courtier's disdain.
The same boat that brought the company to town also carried his brand-new golden coach, a new display of his wealth and power, which the company has shared as a bedroom.
Meeting the unimpressed and easy-going Camilla in person a few days later, the Viceroy (Duncan Lamont) feels relaxed, even going so far, as the Marquise observes, to "remove his peruke before her." For her part, Camilla reclaims a comb she has left in the golden coach. In short, they literally let down their hair with one another!

Love, of course, follows, with a hilarious series of crisscrossed dalliances, lies, and duels straight out of both commedia dell'arte theater and 19th century farce. Throughout, Renoir frames his various theatrical imitations in a rich Technicolor palette of golds, reds, greens, and blues, as his Columbine plays out love and treachery again and again.
The three lovers, in turn, represent three apposing possibilities for Camilla as the wife of an empty-headed and conceited adventurer (the toreador), a wise and wealthy scoundrel (the Viceroy), or an earnest and honest dreamer determined to live life like the natives (Don Antonio). But her heart, the viewer comprehends, is given over the drama of life rather than reality. She is a born actress despite her complaints, a failure as a lover in the flesh.
As the Viceroy, who has awarded her the golden coach, faces deposition and possible execution for his profligacy, Camilla dramatically saves the day by handing over the coach to the Bishop of Lima, who was to decide the fate of Ferdinand. Her theatrical gesture saves him, but in the process she must give up all reality. Behind a sheer curtain, as the camera pulls away, she is asked "Does she miss real life. "A little" the actress meekly replies, as Renoir's theatrical film comes to a close, leaving his actress locked away in another kind of reel life.