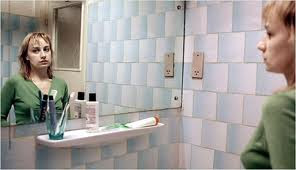 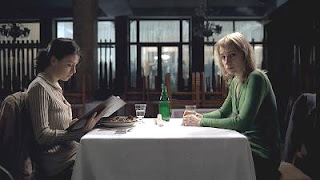 THE COLLECTOR
by Douglas Messerli

Filmmaker Cristian Mungiu’s 4 Months 3 Weeks & 2 Days begins in a Romanian student dormitory, a decaying university building filled with students who run black-market shops out of their rooms, featuring everything from perfume to cigarettes and more serious drugs. It is the last days of Romanian president Ceauşescu’s Communist regime, a desolate time where everything is falling apart. And we immediately sense that for the two women, Otilia (Anamaria Marinca) and Gabita (Laura Vasiliu), who share a room, their lives are unraveling as well. Gabita is apparently preparing to travel, for she is nervous and confused, and pleads with Otilia to take care of her finances, handing over the money she has collected to her friend. Otilia makes a quick trip to her boyfriend’s classroom, collecting another loan for Gabita and promising she will join him later for his mother’s birthday. As the director quipped in his introduction of this film at the Los Angeles AFI Festival, for the film’s characters “It is clearly one of those days when everything seems to be going wrong.”
This strange feeling of discomfort mounts as Otilia makes a trip to a hotel where she discovers that they have failed to reserve the room Gabita has called about. Otilia, accordingly, is forced to try another hotel, where she has no choice but to take a more expensive room for a longer period of time. Then she’s off to meet the mysterious Mr. Bebe, an appointment for which she arrives late.
At the hotel, where he is asked to leave his iden-tification card at the desk, Bebe vents his anger at Gabita for failing to properly follow his instructions and for sending another in her stead. As suddenly we realize that the voyage for which Gabita has been preparing is not a tryst with a lover or sudden journey home but concerns this hotel, where she intends to have an illegal abortion. Bebe outlines the routine, a sterilized tube will be inserted and Gabita will be forced to lie still until the foetus is expelled. There may be a lot of blood and there is clearly a danger of infection. Otilia is to make certain that Gabita’s temperature does not rise too high. He also outlines the punishment they will each endure if the fact of the abortion is revealed.
When the girls begin to discuss the cost, however, he pretends offense: Has he ever said anything about money? he asks Gabita. They are prepared to spend an amount others have told them it might cost. But now Bebe becomes enraged! Do they imagine he would undertake such a politically dangerous act for so little? It becomes apparent that the cost will be much higher—to be paid not in Romanian lei but with the rape of their bodies. Because she has served as the go-between, Otilia, despite the fact that she is menstruating, has no choice but to sacrifice herself for her friend.
Sex is only the first of many sacrifices throughout the film Otilia undergoes because of Gabita’s incompetency and lies, and, more importantly, because of the patriarchcal government’s intervention into their lives. Escaping for a short visit to her boyfriend’s home, she witnesses perhaps the only alternative to her college preparation as a factory worker (she and Gabita are “tech” majors): the role of a housewife who, like her boyfriend’s mother, cheerfully faces the complaints of her in-laws about her cooking and housekeeping. When she admits to her boyfriend what she has been doing, he can only proclaim that he too is against abortion, which suddenly forces her to perceive that if she were to discover herself in the same situation as Gabita—clearly possible given what she has just had to suffer—there would be no one to support her. In that discovery, she escapes the house only to have to face Gabita’s aborted foetus on the floor of the hotel bathroom.
Unlike American films, where the foetus would surely have been kept out of sight, Mungiu’s camera hovers over the bloody object itself, forcing us to come to terms with the reality and significance of the event.
Again Otilia is sent out into the night, this time to dispose of the foetus. These trips into the city landscape are presented in nightmarish detail, the camera constantly in motion as dark figures appear suddenly in alleys and nearly all public transportation seemingly evaporates. Otilia, like the audience, can only fear for other dangers lurking in this desolate landscape. Bebe has suggested that they throw the foetus down a trash shoot in a high-rise, and when she encounters roaming dogs in the dark city streets, against Gabita’s plea to bury the foetus, Otilia follows his advice.
A final return to the hotel pits the two women in the hotel’s restaurant against a wedding party celebrating in the next room, which only reiterates the fact that these vital young women have been given very few choices in their lives. And after another warning to Gabita to keep her secret forever, the film slams into a dark and sudden end.
Throughout the film we have observed the forceful Otilia gathering up things along the way: while Bebe sterilizes the tube, she rummages through his suitcase, extracting from it a knife. Later, when she is told Bebe has left his identification card, she collects it as well. More importantly, we perceive, she is collecting information from this horrible series of incidents, preparing herself, it appears, for the inevitable circumstances she also may soon be forced to endure.
Like Florian Henckel von Donnersmarck’s The Lives of Others, 4 Months 3 Weeks & 2 Days—winner of the 2007 Palme d’Or of the Cannes Film Festival—is a testament to the millions of individuals who suffered and survived the bleak Communist regimes as they crumbled. Yet one need only look to the American political right to perceive that many still desire political and religious restrictions of what can only safely be a personal choice.