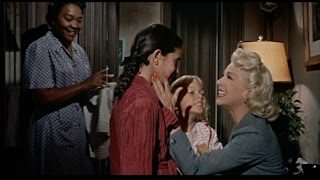 Juanita Moore and Lana Turner in Imitation of Life 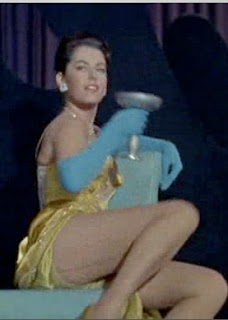 Susan Kohner in Imitation of Life 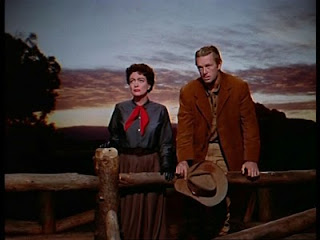 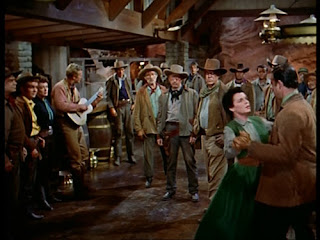 and suddenly I saw a headline
LANA TURNER HAS COLLAPSED!
there is no snow in Hollywood
there is no rain in California
I have been to lots of parties
and acted perfectly disgraceful
but I never actually collapsed
oh Lana Turner we love you get up


A few days after seeing Imitation of Life, I happened upon a television broadcast of Johnny Guitar, a movie I'd seen once or twice previously, which I suddenly saw in a new way within the context of Sirk's movie. Like Sirk, Ray has often been praised (and criticized) for locating his films in the context of popular genres (in Ray's case most often in teenage melodramas such as his Rebel without a Cause) and for his oversaturated color prints. In this work of 1954 Ray attempts a Western—if you can call it that. For Ray's "western," as François Truffaut has described it, is "phony"; or, if it is a western, it's "the Beauty and the Beast of Westerns, a Western dream."
As most commentators have noted, in Johnny Guitar the standard gender roles are reversed: the two major male figures, Johnny Guitar (played by a laid-back Sterling Hayden) and the Dancing Kid (Scott Brady), are in thrall to the powerful saloon-keeper Vienna (Joan Crawford). Guitar, her first love, does not even wear guns, having put them aside in an attempt to alter his life. Vienna's current lover, the Dancing Kid spends most of his time with his all-male gang, only occasionally returning to Vienna's isolated saloon for entertainment. Brooding over her male customers is the simmering, glowering, wise-cracking Crawford, wearing various colors of blouses and pants, generally topped with a bright red scarf tied round her neck. Her lips are the reddest lips in the world.
A savvy business woman, Vienna has purchased her saloon on land that is destined to become part of the railroad, and she plans to sell it and her property as a railroad stop for a hefty price. The problem is that the bar lies in the territory of local ranchers who want no railroad junction in their open lands, no new development that might bring settlement fences with it. Led by an equally powerful woman, Emma Small (Mercedes McCambridge), the ranchers are determined to rid their territory of the Dancing Kid and his followers, along with Vienna. As the movie opens, robbers have hit a stage coach, killing Emma's brother, and Emma and the ranchers arrive at Vienna's saloon to arrest her and the gang.
The heart of this battle, however, is not really financial, but psycho-sexual, for the Dancing Kid has also caught Emma's eye, teasing her with his nightly dances and sexual energy. Emma, dressed almost throughout the film in black, is a closet Puritan, longing for his company while, out of her guilt, seeking his punishment through his death.
In this very first scene, Ray lays out the entire story: Emma and her men will ultimately kill Vienna, unless Vienna kills her first.
The power of the film lies in its dialogue, witty, fast-paced, rarely allowing for a sentimental moment. Hayden and Crawford, in part because of their absolutely opposing temperaments, are near perfect in their dueling tangle of words. In the following dialogue, it is useful to note how Hayden speaks the lines which in most movies a woman might speak, Crawford responding more like a stereotypical male:

In truth, Vienna has sent for Johnny Guitar to help her in her fight against the ranchers. She seems so self-sufficient, however, so able to keep the ranchers and sheriff at bay, that both her male suitors are almost insignificant. As she puts it to those who would take her off to jail, standing, as she does for much of the early parts of the movie, at the top of a staircase: "Down there I sell whiskey and cards. Up here all you can get is a bullet in your head."
Ray's male characters, like most of Sirk's figures, are ghostly like beings in the real world, living as dreamers determined to mold their realities around an imitation of art: music in Johnny Guitar's case and dance for the Dancing Kid. Consequently, their inner beings are as dimensional as the names they have created for themselves. As the plot meanders toward its expected conclusion, contrarily we suddenly see a different side of Vienna, a woman still very much in love with Johnny and a figure terrified by the difficulties she must face. She is the only one with any depth.
With their mine panned out, little money left, and accused of committing a robbery and murder of which they are innocent, the Dancing Kid and his gang determine to rob the small-town bank at the very moment that Vienna has decided to withdraw her money. The coincidence makes it seem as if she has been involved, particularly since the Dancing Kid kisses her as he rides off with Emma's and the ranchers' savings.
Facing the inevitable, Vienna awaits the posse—quickly rounded up while still in funeral garb for the burial of Emma's brother—dressed in a full cut white dress, revealing an entirely different possibility in her life. The scenes which follow, the vengeful burning of her "estate" by the now near-mad Emma, Vienna's near death by hanging, and her nighttime run are made even more strange and absurd by her costume. Dressed as she is, there is no way to hide, let alone escape.
Quickly changing back into blouse and pants, she leads Johnny into an underground passage that takes the two to their destiny: the hideout of the Dancing Kid's gang and the long-expected duel between the two women.
Determined to settle the battle, Emma fires up the ranchers with hateful statements similar in style to those made by the right-wing during the House on un-American Activities trials, a parallel recognized by many critics and admitted by Ray. Yet even here, the film does not rest in its Freudian implications, as the posse, sickening of the violence, leaves Emma to herself. She kills the Dancing Kid, the only man she has apparently loved, before turning the gun on Vienna (the name, one might note, of Freud's home city). Vienna shoots Emma dead. Love and life win out over hate and Emma's cult of death.