Juan Jose Campanella | The Secret in their Eyes 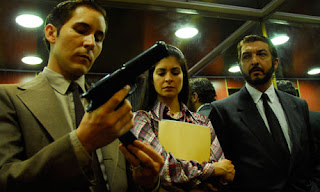 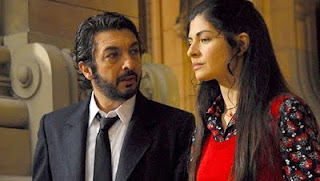 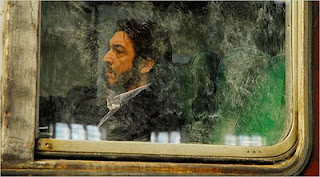 BEGINNING TO FORGET
by Douglas Messerli

Winner of the 2010 Oscar for the Best Foreign Language Film, Argentine director Juan José Campanella's film is a smart mix of contemporary detective story, love story, and political mystery, all combined with a bit of film noirish style, which makes it highly appealing, if not a great event in the cinema.
Benjamín Esposito (Ricardo Darín), a former police detective, determined to write a novel on an old, closed case of twenty-five years before, returns to the public offices of his former superior, Irene Menéndez-Hastings to ask her permission for him to reopen the records of that brutal event. I don't know what secret the title is referring to regarding their eyes, but it is clear the moment the two reencounter one another that Benjamín has been in love—and remains in love—with the head-detective, emotions clearly intertwined with the case itself.
The murder of a beautiful young woman, Liliana Coloto, was, we are to understand, a shocking event in Argentinean culture. What we gradually come to comprehend, however, is that it is not the murder itself perhaps that has so shocked everyone—for Campanella photographs the corpse almost as if he were shooting a painted manikin, removing the viewer from any visceral emotion—but the events surrounding the murder, which echo throughout the culture for months after the investigation has begun.
No sooner have Esposito and his perpetual drunken partner, Pablo Sandoval (Guillermo Francella) intuited that the murderer is not an iterant Chilean and his friend who the Head Prosecutor has quickly rounded up to solve the mystery, than the case is closed. Illegally, Esposito and Sandoval track down a former boyfriend of the dead woman, ultimately proving that he has committed the act.
Yet even as they prove his guilt, the Prosecutor, out of revenge and his own criminally political motivations, frees the real killer, Isidoro Gómez, using him as a goon to murder and punish political enemies. The case, positioned in the period of Argentine dictator Jorge Rafael Videla's horrific reign of terror, is only a reflection of the insanity of the period, when hundreds of men and women opposed to or even thought to be questioning the government where conveniently murdered, dropped from airplanes or secretly tortured to death. It is perhaps that secret horror to which the film points, not to the hidden love between its two major figures.
What we learn eventually, in a film that perhaps has too many twists and turns to permit plausibility, is that the man who most suffers from this murder—despite the fact that the series of events also leads in Sandoval's death—is the young victim's husband, only recently married to her at the time of her murder.
Ricardo Morales seems throughout as the sort of perfect griever, a man who cannot escape the realities that changed his life, but yet seeks no violent revenge, only justice—an near-impossible demand in the society in which he exists. For Morales, however, it is not the larger picture that matters, but the cessation of daily life; the movie begins, in fact, with a voice over describing precisely his position:

On June 21st, 1974, Ricardo Morales had breakfast with Liliano Coloto for
the last time. For the rest of his life he'd remember every single detail of
that morning. Planning their first vacation... Drinking tea with lemon for his
nagging cough...with his usual lump and a half of sugar. The fresh berry jam
he'd never taste again. The flowers printed on her nightgown...and especially,
her smile. That smile like the sunrise...blending in with the sunlight on her
left cheek.

By the middle of the film, however, when questioned by Esposito, Morales suggests that the worst thing about the shell of life is that he is "beginning to forget," is unable to remember certain experiences with and images of his wife.
In Esposito's desire to write about this past, we realize that the two men are in similar positions. The detective himself is trying to recover something, the loss of an intense experience of his life, his rejection of the woman he has loved when he leaves the city to save himself from Sandoval's fate. As Morales has warned him, however, "If you keep going over the past, you're going to end up with a thousand pasts and no future."
Morales should know. For what Esposito finally uncovers is that Morales has himself joined the living dead of Argentine society. After intense questioning by Esposito, he admits to having killed his wife's murderer, that he, too, has become a wanted man. Yet both the detective and the audience perceive that there is something wrong about this admission of guilt. How has the man who admitted to have a "life full of nothing" suddenly come to have a life full of something, if only this guilt?
Upon leaving, Esposito turns back, observing Morales from afar. What he discovers is as horrifying in some ways as the original act. Morales has imprisoned the murderer Gómez, locking him away in a barn, feeding him, keeping him alive—but in total solitariness, in a world of utter silence. When Gómez discovers Esposito as witness, his plea is not that he help him to escape, but to make Morales speak to him. It is love that he has wanted, of course, that has brought him to such hate in the first place, the reason he had killed. And it is that love stolen from him that has turned Morales, as well, into a mad man—a man, like Gómez, with no future, a ghost.
Fortunately Esposito can "turn back," and correct his error by returning to life. He faces Irene, unafraid for the first time in his life of "complications."