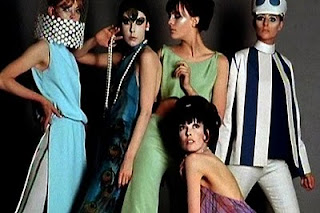 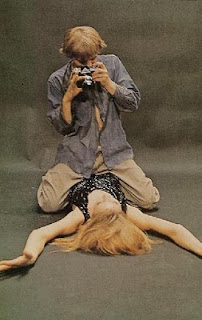 Michelangelo Antonioni’s Blow-Up begins with an image of deception. Released from either prison or a flophouse (several reviewers have suggested the latter), Thomas, along with other denizens of the place, moves slowly through the gate. The skuzzy young man—whose face, somewhat like Pound’s metro image of “petals on a wet, black bough,” stands out (he is played after all by the photogenic actor David Hemmings) against the gauntly determined faces of the others—carries a small paper sack like a treasure, keeping his distance from his fellow inmates, seemingly resisting their friendly (we hear none of their conversation) advances. The moment they have walked away, Thomas turns and walks in the other direction, settling into a convertible and throwing the bag, containing what we now perceive as an expensive camera, into the back seat. If we haven’t guessed, we might at least suspect something is not as it seems—and, indeed, we later discover that the central figure of this film has been on a secretive “shoot,” snapping shots of the men inside the institution for a book of photographs he is planning to publish with the help of his friend, Ron (Peter Bowles).
Immediately after, we are presented with a carload of screaming mimes, what should be a contradiction in terms, out on what appears to be an obnoxious early morning joyride (I once quipped that all mimes should be shot at birth), but is actually a “rag,” a raucous mod-60s way of raising money for charity.
Thomas returns to his studio/home, ready to shoot the “birds,” dressed in the newest mod fashions, over whom he hovers while caressing and kissing each in order to get them to “perform,” while also alternately berating and verbally abusing them. Such evidently is the lot of a fashion model, for despite all the abuse, the women wait patiently between his frequent absences, while new would-be models stand at his door hoping to gain his admittance.

A quick visit to his artist friend Bill next door reveals similar issues of deception and self-delusion. Bill clearly is deluding himself about his relationship with his live-in girlfriend, Patricia (Sarah Miles), as we perceive through her and Thomas’s intense glances, a relationship that later is more revealed in her quick visit to her neighbor after having sex with Bill. The artist also iterates what will be a major theme of Antonioni’s work: that his art often seems empty until he can extract an image or idea from it. In other words, what seems to be empty may come to have great meaning if looked at long enough or from various perspectives.
It is a dangerous theme for a filmmaker, perhaps, whose works have often seemed to some critics as being plotless and whose images, although stunningly beautiful, seem to many viewers to be disjunctive.
As I made clear in my discussion of L’Avventura, I don’t “read” Antonioni at all in that way. But many early and even later viewers of Blow-Up felt that it was without a coherent story, that its central issue was about illusion and reality, and that these issues were wrapped up in metaphysical concerns. The reviewer of Variety, for example, began, “There may be some meaning, some commentary about life being a game, beyond what remains locked in the mind of the film’s creator…. But it is doubtful that the general public will get the ‘message’ of this film.” According to Ronan O’Casey, who played the mysterious lover of Jane (Vanessa Redgrave) and the later corpse of the film, a reporter from the German magazine, Der Spiegel, “kept saying,” during an interview with him, “But this movie makes no sense—no narrative thread, no plot line!” A number of critics expressed confusion over whether or not there had really been a murder and a corpse.
O’Casey accounts for the confusion by reporting that, after vast over-expenditures, producer Carlo Ponti (who died on January 9th this year) appeared on the set, closing down further shooting, and that Antonioni was left with no choice but to piece together the fragments he had already filmed.

The intended story was as follows: the young lover, armed with a pistol,
was to precede Vanessa and me to Maryon Park in London, conceal himself
in the bushes and await our arrival. I pick up Vanessa in a nice new dark
green Jaguar and drive through London—giving Antonini a chance to film
that swinging, trendy, sixties city of the Beatles, Mary Quant, the Rolling
Stones, and Carnaby Street. We stop and I buy Vanessa a man’s watch, which
she wears throughout the rest of the film. We then saunter hand in hand into
the park, stopping now and then to kiss (lucky me). In the center of the park
Vanessa gives me a passionate embrace and prolonged kiss, and glances at
the spot where her new lover is hiding. He shoots me (unlucky me), and the
two leave the park intending to drive away. Their plans go awry when he
notices Hemmings with his camera and fears that Hemmings has photos
of her. As it turns out, he has.

Los Angeles, August 21, 2007
Reprinted with the previous essay as “Looking Back on the Adventure” Nth Position [England], (October 2007).
Copyright (c) 2007 International Cinema Review and Douglas Messerli
Posted by greenintegerblog at 8:17 AM