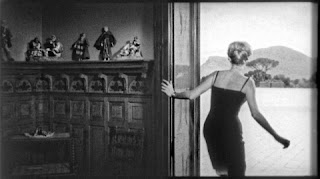 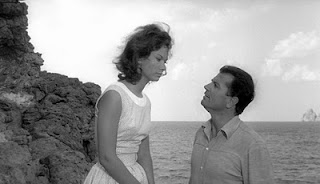 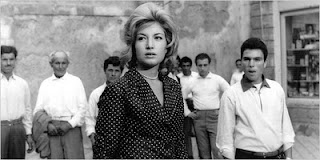 OUTSIDE THE FRAME
by Douglas Messerli

When L’Avventura was first shown at the 1960 Cannes Film Festival, the audience expressed their hostility to the film with whistles, foot-stamping, and derisive shouts. Although the movie was more enthusiastically received by the critics, and won that year’s Special Jury Prize, its American premiere resulted in a near-complete puzzlement on the part of noted critics such as Bosley Crowther, writing in The New York Times. “Watching L’Avventura (“The Adventure”), which came to the Beekman yesterday, is like trying to follow a showing of a picture at which several reels have gotten lost. Just when it seems to be beginning to make a dramatic point or to develop a line of continuity that will crystallize into some sense, it will jump into a random situation that appears as if it might be due perhaps three reels later and never explain what has been omitted.” “’Tis strange,” Crowther concluded.
If over the years Antonioni’s film has grown in reputation, even its admirers have continued to stress the film’s seemingly disjunctive and unconventional narrative. My beloved guide to World Film Directors (published by H. W. Wilson) describes the work as eschewing conventional narrative, as a film “without story.” Film historian Geoffrey Nowell-Smith, in a lovely essay on L’Avventura, reprinted in the New Criterion DVD of the film, describes it as a groundbreaking work that revealed that:

…films do not have to be structured around major
events, that very little drama can happen and a film
can still be fascinating to its audience. It also showed—
and this was harder for audiences to grasp—that events
in films do not have to be, in an obvious way, meaning-
ful. L’Avventura presents its characters behaving accord-
ing to motivations unclear to themselves as much as to
the audience. …They are, to use a word very fashionable
at the time the film came out, alienated. But to say, as
many critics did, that the film is “about” alienation is to
miss the point. The film shows, it doesn’t argue.