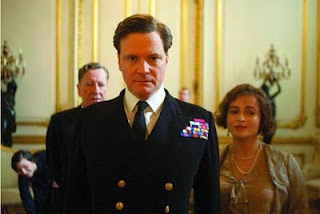 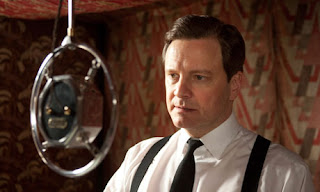 FINDING A VOICE
by Douglas Messerli

David Seidler (screenplay), Tom Hooper (director) The King's Speech / 2010, the screening I attended was on December 3, 2010

Tom Hopper's likeable film, The King's Speech, focuses its attention on the private problems of a very public figure, King George VI of England. For whatever reasons—the movie suggests psychological and physical abuse by his first nanny, the distant imperiousness of his father, King George V, and possibly even the mockery of his defects by his brother, Edward—"Bertie," as he was called at home, suffered a speech impediment of heavy stuttering. In an earlier age such a problem might have been well hidden, but in the growing industrial modernism of the pre-World War II years, radio and public broadcasts were growing in popularity, and the roles of the royal family increasingly imposed public speaking upon them.
Seidler's script nicely overlays several events that force the future king to seek speech therapy. In fact, as early as 1925, Bertie began meeting with the idiosyncratic, Australian speech therapist Lionel Logue, and by the opening address at Australia's Federal Parliament in 1927 he spoke "with only slight hesitations." For the film version, his therapy is understandably pushed ahead to the year of his brother Edward VIII's inheritance of the throne, which he abdicated in December 1936 in order to marry his American, twice-divorced mistress, Wallis Simpson—propelling Albert, renamed George, to the role as King.
Similarly, preparations for the British declaration of war against Germany, which occurred on September 3, 1939, are apparently backdated three years (unless I missed a huge narrative swath of time in the movie), so that the important speech about war George VI is forced to make, representing his cure, takes place shortly after his coronation.
I can well understand this collapsing of time in relation to the potential drama surrounding the film's major focus, but unfortunately writer and director do not take advantage of the immensity of these events, only hinting, with a passing reference to the resignation of Prime Minister Stanley Baldwin—who had badly misread German determination to attack allies—of their full significance. It might have added a great deal of gravity and meaning of this film to contextualize the personal events within the failures of the next Prime Minister, Neville Chamberlain, to comprehend the insincerity of Hitler, and the importance of the King's later relationship with Winston Churchill. In all of these international situations, speech was of utter importance; had the King not been able to reduce his stutter, he might never have become the great favorite of the British people he was during those dark days of War. Indeed, his daughter Elizabeth might never have come to power. Some advised that George's younger brother's son should inherit the throne.
For all that, the marvel of this film is the superlative acting of all of its characters, particularly Colin Firth as King George VI and Geoffrey Rush as Lionel Logue (despite the fact that my ears could hear very little of an Australian accent in his performance). The two play off each in other in a manner so extraordinary that one often feels the movie is much deeper and profound in its character studies than it truly is. Rush plays Logue as an outsider, an eccentric commoner with little respect for or concern of royal distance and social separation, while Firth brings depth to his character by straddling the two worlds, maintaining his royal reserve, while simultaneously struggling against family secrets and even horrors. It is no wonder that the people felt close to him throughout his reign.
The scene in which the reluctant King discovers he truly does have a voice, despite his impediment, is a perfect example of the acting skills of these two performers meeting up the wit of the script:

It is being in the presence of such actors and the marvelous ensemble that surrounds them that makes this film so close to great art, and the reason that I ultimately feel frustrated for its own temerity, for its refusal to incorporate the real world in which the lovely fable upon which this work is centered actually existed.