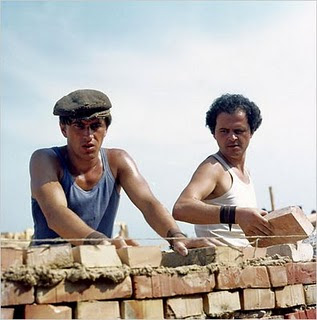 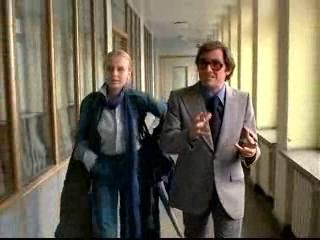 THE PARAGON
by Douglas Messerli

Wajda's documentary-like film, Man of Marble, centers around a young film student, Agnieszka (a character based, in part, on the real-life film director Agnieszka Holland) who has chosen as her subject a national hero of the 1950s, a bricklayer Mateusz Birkut (played by Jerzy Radziwilowicz). Her faculty advisor strongly discourages her from tackling this subject, trying to steer her on to something about steel and industry, as opposed to the now obscure figure who helped build the Polish city for 100,000 people, Nowa Huta.

No one has yet touched on the 50s. Why don't you deal with a
subject that has no risk of ambiguity. A better project would be
facts—facts are steelworks and their output.

Exactly why Agnieska has chosen her subject is unclear; apparently she is simply interested in finding out more about her father's generation. But once she has begun her research she (and the audience) become more and more spellbound by the mysterious story surrounding Birkut. At first, even the head researcher is skeptical about the young director, and is disinterested in the forgotten documentaries she has uncovered for Agnieska: obvious propagandist pieces of the day with titles such as "Birth of a City" (an uncompleted film, where the second director, so the credits list, was Wajda himself) and "Architects of our Happiness." But as she grows to know the young woman, it is clear she becomes more and more fascinated by her behavior and obsessions.
Indeed the lanky Krystyna Janda plays Agnieska in a manner attune to the blaring, jazz-inspired score of composer Andrzej Korzynski. Her every move is a rush forward, her body itself a dare to anyone who might stand in her way. Awake, she is in near-constant motion, edgy, nervous. The rest of the time she collapses into sleep. With the help of three camera men, one an old-timer who admits this may be his last film, and who has a somewhat difficult time adjusting to her insistence on the use of a hand-held camera, she barges into a national museum and slips into a back room where no one is allowed to enter, clandestinely shooting a large marble image of Birkut. When the assistant queries her about her interest in the backroom, insisting "We've got better sculptors here now." Angieska's response is an ironic, "I daresay."
Through these forays into the past, interviews, and the documentaries, the filmmaker comes to play the role of detective, gradually revealing the story of a simple believer, a true "paragon." Like thousands of other such workers, Birkut, lured from a small village to work on the vast construction project, was, as he is later described, a real country bumpkin. His handsome good looks and his obvious innocence and belief in the system—despite the deplorable working conditions and the insufficient food served the workers—makes Mateusz the perfect victim for the up and coming filmmaker Jerzy Burski, who in order to promote Stakhanovite principles (ideas based on the theories of Aleksei Grigorevich Stakhanov, who encouraged workers to engage in competitive battles, resulting in contests in which miners, for example, mined 607 tons of coal in one shift, etc.) challenges the young bricklayer to participate in an event where he and others will lay 30,000 bricks in just a few hours. To Agnieska, Burski boasts, "He was my greatest discovery, my biggest coup!"

Birkut wins the challenge, laying 30,509 brinks before he nearly falls over in exhaustion. That film and his youthful, handsome demeanor make him a national hero, and for a short while, the young country bumpkin rises in the party ranks, with his friend Wincenty Witek, touring the country in an attempt to explain his techniques and stimulate the workers.
At one such event, however, Birkut is handed a heated brick and badly burns both hands. Instead of recognizing the dissention of workers against the Stakhanovite methods, authorities prefer to describe the event as a traitorous act emanating from outside the country, focusing on Witek (who was wearing gloves when he handed his friend the burning brick). Birkut's attempts to defend Witek, end in Kafka-like episodes. At one point when Birkut accompanies Witek to the criminal offices, he watches his friend enter a small room with one door, only to soon after discover a official sitting in it alone at his desk, who insists he has not seen Witek. Traveling to Warsaw in Witek's defense, Birkut is told to leave the case alone; if there is an error, it will be corrected.
Having displeased the authorities, Birkut and his wife are forced to leave their Nowa Huta apartment; in one documentary Agnieska observes authorities removing a banner of Birkut and replacing it with another. The man of the people, the "paragon" has fallen into disgrace. Clearly now disillusioned, Birkut hires a gypsy band and travels with them to the office of Internal Security, where he throws a brick through the front door.
In yet another documentary discovered by the film school's researcher, we see Birkut at the trial of Witek. Hearing that Witek has confessed to delivering the burning brick, Birkut astonishingly admits that he has been a co-conspirator, that he knew about the event beforehand. Birkut is found guilty, along with the so-called Gypsy Band conspirators, and is himself imprisoned.
Later in the film the young director, discovers that Witek has been rehabilitated and is now head of the Katowice steel mills. Flying over the mills in a helicopter, we witness a Witek who has sold out to the system, ironically running a company that Agnieska has been encouraged to focus on for her diploma film.
Birkut is also released, but he returns to Nowa Huta as a stranger, discovering that his wife Hanka has left, after having denounced him. Tracking her down in a bourgeois apartment where Hanka has indentured herself to a local restaurant owner, Agnieska is told the story of how Birkut came to her, pleading for Hanka's return. Her answer is a painful admission of her moral decline. Now an alcoholic, she beaten by her restaurant-owning lover.
Certainly by this time in Wajda's powerful film, we have witnessed enough to know that Agnieska's film within a film is a significant one, a work of utter honesty about a world where everything is lied about or hidden. In such a world it seems inevitable that the school refuses to accept the reels she shows them and demands that she return the camera.
Dispirited for the first time, we now witness her at her father's home, lying upon a couch in a near stupor. Her father argues that it is ridiculous that they have turned down a project to which they had previously committed. If I were making such a film, he argues, I would want to talk to the subject. As he leaves the house, he slips his daughter some money.
Previously Agnieska has been unable to find either Birkut or his son. But she now suspects that the son is working, not under the name Birkut, but with his mother's name Tomczyk in Gdansk. There, armed with a camera she has obviously purchased with her father's gift, she finds a man that looks amazingly like Birkut (the role is also played by Radziwilowicz), who admits he is Maciej Tomczyk and explains that his father has died. That death is unexplained in Man of Marble, but in Wajda's later film, Man of Iron, we discover that Birkut has been killed along with other striking workers in Gdansk. (That Wajda has brought us to this place three years before the Gdansk Solidarity Movement is no accident; the leader of the 1980 strike, Lech Wałesa, lost his job there in 1976, and appears as a character in Wajda's 1981 film).
Tomczyuk enters the shipyards, while Agnieska waits. Upon finishing his day, Maciej finds her where he left her, admitting that he knew she would not give up. In the last scene we see them quickly striding forward down the hall of the film school, apparently convinced that her picture will now be made.
It is a hopeful ending to a rather ambiguous reality. In truth, Wajda was forced to cut his original ending, which showed the 1970 events in which Birkut was supposedly killed. Although the film was released in Poland in 1976, it was withdrawn from distribution two months later, with Wajda being accused of "falsifying history." Perhaps the image of one of Agnieska's instructors about to enter the hall as the young director and Birkut's son move purposefully forward is more telling; that man quickly returns to his office, closing the door. Truth is always a difficult thing to face.

Posted by greenintegerblog at 7:35 AM