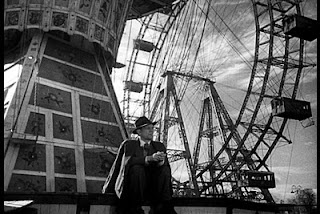 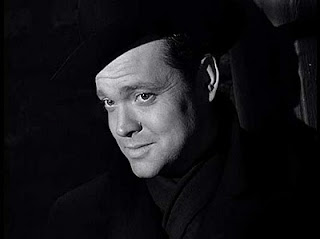 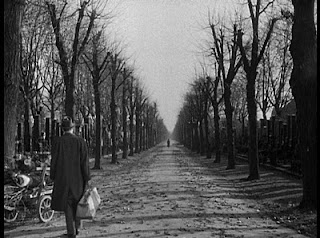 INVITATION TO A DEATH
by Douglas Messerli

I presume that most readers of an essay on The Third Man have already seen this classic 1949 film and are acquainted with its rather creaky plot. For those few who may be approaching this material for the first time (I’d suggest, however, they first view the movie), I’ll briefly recount the story.
As the opening narration—recited, in what I think is the most appropriate version, by director Carol Reed in the British cut, reveals post-World War II Vienna as a city divided into five sectors, controlled respectively by the Russians, the British, the French, the Americans and, at the city’s center, an international patrol—“all strangers to the place and none of them [speaking] the same language. Except a sort of smattering of German.” Although most of the action of this film takes place in the British and international sectors, the character at the center of the story is an American, Holly Martins, who has traveled to the bombed-out Vienna upon the invitation of his friend, Harry Lime, another American, who “had offered him, some sort, I don’t know, some sort of job.”
What Martins, a writer of American Westerns, discovers almost immediately upon his arrival is that his friend, Harry Lime, has just been killed in an automobile accident. The porter of Harry’s building briefly describes the death; but a short while later, a friend of Harry’s, Baron Kurtz, who, with Harry’s doctor, Winkel, arrived upon the scene immediately after, suggests a slightly different version of events of Lime’s accident, and Holly is confused by the inconsistency. Attempting to check into a nearby hotel, he is told by the British sector head, Major Calloway, to leave the city

An accidental encounter with the head of a local cultural club, Crabbin, who invites Martins to lecture to his group, gives Holly the purpose and cash to stay on in search of the truth of his friend’s death.
One of Martins’ first encounters is with Harry’s girlfriend, Anna Schmidt, suddenly the subject of questioning and a house search, where the British police uncover a forged passport (she is Czech-born and, accordingly, should be living in the Russian sector). It has been a gift, evidently, of Harry, and viewers immediately suspect that such acts of forgery and other minor criminal acts are at the heart of Calloway’s warnings. Lime evidently has a tradition of slightly unsavory activities, and, as we later discover, has previously left Martins in the lurch. But the underground activities seem limited to the context of petty thievery, the kind that the Baron and Anna both suggest is necessary to get on in post-War Vienna.
Soon after, Martins discovers from the porter that there were not two, but three men on the scene just after Lime’s accident; and almost immediately upon Martins’ relaying that information to the police, the porter is strangled. The search, briefly, turns to the discovery of who was the “third man.”
The quick-minded viewer immediately suspects what soon becomes obvious, that Harry himself was the “third man,” and, accordingly, brilliant scriptwriter Graham Greene reveals that Harry is alive by following the movements of a cat known to love only Harry. The scene where Orson Welles (Harry Limes) suddenly appears out of the hidden shadows of the Vienna streets is one of the most memorable of the film.
As Calloway proclaims upon being told of Harry’s reappearance: “Next time we’ll have a foolproof coffin.” Lest Martins continue in his delusion that his friend was merely a petty thief, Calloway details Lime’s criminal activities, among the most horrific of which is his buying up of penicillin, diluting it, and selling it back through the underground, acts which result in death and madness for adults and, particularly, sick children.
Meanwhile, Martins blunders through the city, demanding to see Harry during the daylight hours. Their encounter, high up on a Ferris wheel, is one of the most devastating portrayals of moral lassitude ever committed to film. As Martins confronts his “friend” with the facts he now knows, Harry uses nearly every standard line known to self-justifying criminals. Asked if he’s ever seen any of his victims, Lime responds:

You know, I never feel comfortable on these sorts of things. Victims?
Don’t be melodramatic. Tell me. Would you really feel any pity if one of
those dots [pointing down at the people below him] stopped moving
forever. If I offered you twenty thousand pounds for every dot that
stopped, would you really, old man, tell me to keep my money, or would
you calculate how many dots you could afford to spare? Free of income
tax, old man. Free of income tax—the only way you can save money
nowadays.

Lime further supports his own immorality with history and cultural stereotypes, boasting of his behavior by comparing it—in what has become one of the most quoted lines in film history (a speech comparable to that of Henry James’ worst European scoundrels)—with the Borgias, in opposition to democracy, symbolized here by the Swiss:

Don’t be so gloomy. After all it’s not that awful. Like the fella says, in
Italy for 30 years under the Borgias they had warfare, terror, murder,
and bloodshed, but they produced Michelangelo, Leonardo da Vinci,
and the Renaissance. In Switzerland they had brother love—they had 500
years of democracy and peace, and what did that produce? The cuckoo
clock. So long Holly.

___
*In the context of this film, it may be interesting to quote Webster’s dictionary definition of birdlime: Birdlime \Bird"lime`\, n. [Bird + lime viscous substance. An extremely adhesive viscid substance, obtained from the middle bark of the holly, by boiling, fermenting, and cleansing it. When a twig is smeared with this substance it will hold small birds which may light upon it. Hence: Anything which ensnares.