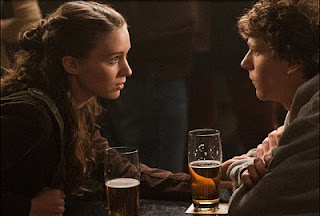 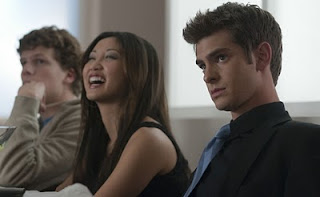 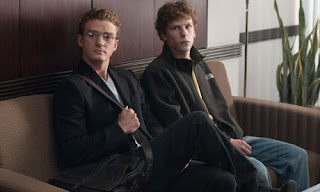 THE LAST FRIEND
by Douglas Messerli

Aaron Sorkin (screenplay) (based on a book by Ben Mezrich), David Fincher (director) The Social Network / 2010

Aaron Sorkin’s and David Fincher’s The Social Network might be described as one of the most interesting films with a hollow center that I’ve ever seen. To put it another way, it is a beautiful film about, as rookie lawyer Marylin Delpy describes the film’s “hero” Mark Zuckerberg, a man “trying so hard” to be an asshole. From the very beginning scene, Zuckerberg (played by the talented near-lookalike, Jesse Eisenberg) reveals his inability to engage in sensitive communication.
From his early dismissal of his date, Erika Albright’s (Rooney Mara) education (Zuckerberg is a student at Harvard)—

Erica Albright: Why do you keep saying I don't need to study?
Mark Zuckerberg: You go to B.U... —

to his later promise to take her to places where she might otherwise never be able to go, he proves that he is as close to being what Deply has suggested. Erica’s farewell parlay sums him up:

Erica Albright: You are probably going to be a very successful
computer person. But you're going to go through life thinking
that girls don't like you because you're a nerd. And I want you to
know, from the bottom of my heart, that that won't be true. It'll
be because you're an asshole.

Certainly there have been numerous works of literature and films with foolish or totally incompetent heroes. But this “hero,” although he becomes fabulously wealthy, is the creator of Facebook, a social networking tool that may be immensely popular, but as Betty White recently joked on Saturday Night Live, thanking Facebook users for helping to put her on the show, "now that I know what it is, it sounds like a huge waste of time.” Frankly, it is, even though I use it daily to announce to my thousand or more "friends" (many of whom I've never met) what I’ve posted on my cultural blogs and to wish happy birthday to acquaintances whose birthdays I might otherwise have overlooked. Basically, however, it still seems to me to be a network for those for whom it was originally intended, people looking for a place for quick, speed-date-like conversations: the young and lonely.
For all that, we come not only to sympathize with this “asshole,” but, given the alternatives of what the film portrays as the Harvard rich, handsome, and elitist snobs represented by the Winklevoss twins (both played by Armie Hammer, grandson of Armand) and their friend Divya Naryenda, we cannot help but root for Zuckerberg in their lawsuit against him. Their claim that they created the idea of Facebook in their HarvardConnection (later ConnectU), may have resulted in a huge settlement with Zuckerberg, but in the larger perspective of things, does seem, as Zuckerberg claims in his film, absurdly unfair: “A guy who makes a nice chair doesn't owe money to everyone who has ever built a chair.”
Sorkin presents this reprehensible hero, moreover, as enormously smart and—like all great American entrepreneurs—extremely hardworking and creative. Zuckerberg is a social underdog who, through his enterprise, wins, the epitome of what all Americans understand as being at the heart of the American dream.
The film extends that by introducing yet another loser-winner, Sean Parker (smart-aleckly portrayed by singer Justin Timberlake), the man who created Napster and, later Plaxo. Parker is presented as a now nearly paranoid being who has already been nailed to the cross of his own creations, destroyed for having created something ahead of its time. Perhaps only Zuckerberg’s friend Eduardo Saverin (Andrew Garfield) cannot comprehend why the younger computer genius would be immediately attracted to such a figure. The two are a natural pair, and Parker, playing on Zuckerberg’s incompetent social skills—he himself being well known for his involvement with drugs, women, and liquor—provides him a kind of father-figure who encourages both Zuckerberg’s creativeness and his social inadequacy. Far more than any abuse of the Winkelvosses, whom Zuckerberg cleverly refers to as the Winkelvi, we cannot so easily forgive his betrayal of Saverin, who, after all, as Chief Financial Officer, funded Facebook in its infancy, and, although he did little to advance it, worked hard, if unsuccessfully, to raise money for its development.
Saverin (Andrew Garfield), a smart but clueless young businessman, who was finally ousted from the company and, perhaps more importantly, removed from any rational influence he might have provided his friend, has little choice but to sue Zuckerberg also. As he puts it, quite clearly, “I was your only friend.”
In the end, accordingly, we have to wonder what each of us wants more, friendships or financial success. The irony here, of course, is obvious. What Zuckerberg created was based precisely on the attempt to create a social network, a series of interchanges with friends. And, accordingly, we must also ask ourselves, did Facebook ever achieve that? Certainly for some individuals, and there are thousands who are addicted to communicating on this network, it probably does provide precisely that, an outlet that allows people to keep in close communication with others. But one also has to ask, what kind of communication that represents, given its limitations of the number of words one can send, and its distancing of true-life communication, replacing, as it does, words on a screen over real human interchange.
Fincher and Sorkin do not even attempt ask, much less to answer those questions. But they do suggest the moral and amoral consequences for what Zuckerberg achieved. The several lawsuits against him result in the payment of millions of dollars—although for a billionaire that amount probably is, as lawyer Delpy aptly describes it, "a speeding ticket," ultimately of little consequence. In today's New York Times we are told Facebook is now worth some fifty billion dollars.
Yet at the end of the film, the writer and director present our “hero,” dysfunctional as ever, pathetically asking his ex-girlfriend, Erika, to become his Facebook “friend.” Sitting like Michael Corleone in a darkened room, Zuckerberg keeps reloading his computer, impatiently awaiting her reply. We suspect she will probably never answer. Or, if she does, that it will have little significance. A friend on a network, after all, is not necessarily a friend in real life. And an asshole may think forever that he lost everyone because of his genius.