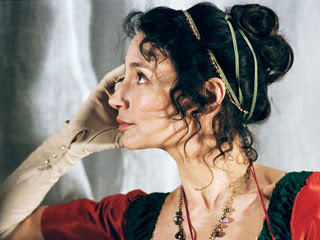 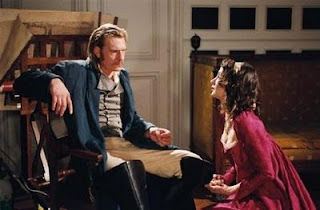 CLASH OF TIME
by Douglas Messerli

Antoinette, Duchess of Langeais (Jeanne Balibar), a woman known throughout Paris as a beauty and wit, is clearly bored by her husband—who is absent throughout this film. At one of the innumerable parties she attends, this at the mansion of her friend Clara de Sérizy (Anne Cantineau), she is introduced to the famed Napoleonic hero, Armand de Montriveau (Guillaume Depardieu), and like any beauty of the day, she quickly circles in to dazzle and captivate him. By evening’s end he is anticipating a visit to her home the next day with intent of making her his mistress.
The great film director, Jacques Rivette, who came of age in the 1950s and has directed over 20 very full-length features since, has chosen two actors, neither of whom are figures of great beauty, but who in their physical bearing and evanescent personalities are extremely successful in drawing attention to themselves. As Montriveau, Depardieu broodingly hobbles and stomps about the high society soirees given by the Duchess’ friends like a buffalo let loose in a formal tea garden. His polar opposite, Antoinette, carefully costumes herself and postures her positions in extended flirtatious assaults upon the addle-brained hero, eliciting, in small segments, his boringly straight-forward tale of his adventures as if it held for her the same interest as the tales of Scheherazade. The Duchess may be a bit past her prime, but she is a genius when it comes to acting the siren.
For weeks she draws the hero to her, only to speed him on his way as she prepares for endless social events. In an interview with Jeanne Balibar, the actress declares that she sees the work as being about sex, “…more particularly about two people trying to reach an orgasm at the same moment. The two hours of the film are really about synchronizing their simultaneous orgasms.” And there is some truth to what she says. Rivette has created a tension-ridden work that builds into a kind Tristan and Isolde-like fervor in which the sexual excitement can never truly be released.
As Antoinette artfully toys with Montriveau, her aunt, the Princesse de Blamont-Chauvry (stunningly portrayed by Rivette regular Bulle Ogier) warns her “He is akin to an eagle—you will not tame him.” Soon after Montriveau clumsily retaliates, abducting the Duchess on her way home from a ball (at which Rivette’s camera brilliantly captures a Quadrille in its most formal enactment) threatening her with both possible rape—the idea of which he quickly abandons—or branding her between the eyes—presumably both as a testament to her sinful behavior and a declaration of his property rights. Her seeming acquiescence to the latter choice destroys any possible pleasure he may receive from such a ridiculous act.
As several critics have correctly pointed out, the real battle here is not just between the sexes but between the times, between the shifting ideologies of eras. Montriveau, the war veteran, is of the Napoleonic era, a period of forceful and impulsive soldiers, while the Duchess is clearly a representative of the Restoration, a time of returning to civility and grace. Of course, the Duchess, despite her own claims that she is simply acting in a manner to protect her good position and name, is anything but civil; and by film’s end, having run her entire being along the edge of Montriveau’s axe (the original French title of this film is Don’t Touch the Axe), she has fallen desperately in love in a way that only romantic heroines can, willing to risk everything for the restoral of their relationship. Sending her carriage in broad daylight to Montriveau’s door, while she remains at home, Antoinette commits societal suicide.
The director parallels this clash of the eras by framing the episodes of the film with archaic-sounding titles, that in their silent film-like parody, create a near-comic effect for contemporary audiences. Like Balzac’s characters, we have no choice but to recognize ourselves as completely displaced observers of this seethingly romantic and sentimental tale. At first, I must admit, this humorous post-modern intrusion upon Rivette’s otherwise richly textured and lushly colored costume-drama irritated me. Did we really need to be reminded of living so far outside this anything-but-story-book romance? Upon second thought, however, the story-board interruptions utterly reiterate how ludicrous and out of touch Armand is with the world around him. Montriveau is a hero in an unheroic age, in a time when manner and dress, the artifice of life, has replaced action. And in the end, he is given no choice but to refuse to act at the very moment when his lover is betting her whole life on his impulsiveness. Her only choice now is to run away, to escape from the stasis of her everyday existence.
When Armand finally uncovers the Duchess, now a Carmelite nun living in a Majorcan Convent under the name of Sister Teresa, his attempt to retrieve her is too late. He and his friends storm the convent just as the other nuns began to celebrate a mass for the dead. Breaking in upon her room, he discovers the shocking evidence that Teresa herself is the body being “celebrated.”
While neither the original novella nor the film make it clear, we can only suspect that his earlier conversation with her at the Convent in the presence of the Abbess contributed to her death. In punishment for her lies, was she starved, tortured by the nuns themselves?
As Montriveau’s colleagues argue at film’s end, it no longer matters. The Duchess does not exist: “THAT was a woman once, now it is nothing. Let us tie a cannon ball to both feet and throw the body overboard; and if ever you think of her again, think of her as of some book that you read as a boy," argues one of Armand’s friend in both the Balzac text and Rivette’s film.
"Yes," assents Montriveau, "it is nothing now but a dream." His time, indeed his life, he finally recognizes, has come crashing to a close.

Posted by greenintegerblog at 9:34 AM