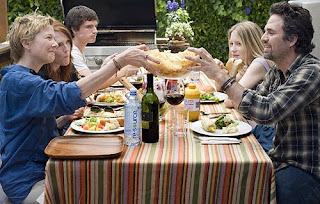 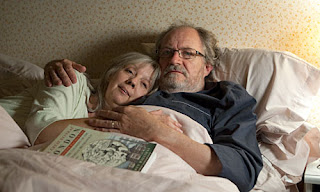 Ruth Sheen and Jim Broadbent in Another Year 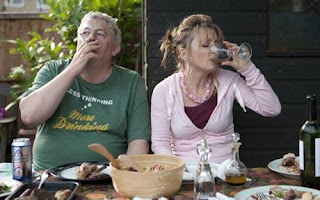 Peter Wight and Leslie Manville in Another Year


ADOPTING A FAMILY
by Douglas Messerli

The feel-good movie of 2010 might be said to be Lisa Cholodenko's comic The Kids Are All Right. Like many another movie of its kind, the writing centers on the well-being of children coming of age within a family that is either having difficulties or is about to fall apart. The standard requires everything to turn out all right at the end, and Cholodenko's work follows that pattern precisely. The only difference with this version of the genre is that Cholodenko's family consists of a lesbian couple rearing a 15-7ear old boy and a soon-to-college girl, who are just at the age when they begin to wonder who their father was—in this case the same sperm donor for both women. Despite the healthy relationship of the kids to their mothers, the young Laser (Josh Hutcherson) is eager to know what his invisible "father" looks like, and pleads with his sister Joni (Mia Wasikowska) to call the donor center for information.

With information in hand, he telephones the local man, Paul (well played by Mark Ruffalo) and sets up a lunch appointment with the man, himself and his sister. The man they discover is a slightly empty, but well-meaning chef/restauranteur who successfully grows his own garden, despite his seeming inability to tend adult relationships with women. His main "squeeze" at the moment is his hostess, Tanya (Yaya DaCosta).

Meanwhile, the mothers (Nic and Jules, both excellently acted by Annette Bening and Julianne Moore) are beginning to wonder about Laser's behavior, unable to comprehend his relationship with a trouble-making boy, Clay (Eddie Hassell) and wondering, particularly when they discover their own gay male porno lying open by the DVD player, if he might be gay. When they question if he is keeping secrets, he admits to meeting with the sperm donor—a man they've never seen before—which clearly promises various emotional responses from them. But since the children seem to have liked him, like any caring parents, they must open up their lives as well to meet the biological father of their kids.

Although Nic remains dubious about the whole thing, Jules finds Paul appealing, as he hires her to landscape his back yard. At this point, however, the movie takes a kind left turn that, while creating the drama of this small work, also slightly confused me. Perhaps we should go back to that gay male porno tape which the women watch. I have no problem with beings of either sex watching a gay porno tape—indeed I've seen the very tape glimpsed in the movie—but is this common with lesbian sex? I have never watched a lesbian tape, although I know there are gays probably attracted to that as well. But, for me, it seems to indicate somehow the confused sexuality that rears its head once Jules begins working for Paul, particularly when they find themselves engaging in abandoned sex, as if Jules had just been waiting for this release her entire life. I am ready to admit that I know very little about lesbian sexuality, but does Cholodenko really want to confirm the male heterosexual myth that lesbians are just waiting for a truly good cock? I have had at least three women friends who, when I was younger, apparently felt that they could save me from my homosexuality, and were determined to do so. Not desiring conversion, I quickly moved off. But Cholodenko's character apparently cannot control herself.

What we also discover in Jules's temporary abandonment of her seemingly happy relationship is her own inability to accomplish what she sets out to do, that she is somewhat confused as she stumbles about her life. Nic, on the hand, is utterly controlling in her immense abilities often ready to treat her mate as another daughter instead of a supporting lover.

Perhaps I should just stop there, and attribute the issues I've brought up to the complexity of the characters. We all know that there are many mixes of sexualities in all of us. It may be that we've now grown sophisticated enough that we can easily assimilate these variations. Upon her discovery that her companion has been sleeping with "the enemy" so to speak, Nic, despite her anger and hurt, and, after telling Paul to go find another family to adopt or to create his own, seems willing to accept her partner's indiscretions. As Jules, somewhat incoherently, admits:

...marriage is hard...Just two people slogging through the shit, year after
year, getting older, changing. It's a fucking marathon, okay? So, sometimes,
you know, you're together for so long, that you just... You stop seeing the
other person. You just see weird projections of your own junk. Instead of
talking to each other, you go off the rails and act grubby and make stupid
choices....

The son reiterates his support for his mother's relationship with an unintentionally humorous observation:

Laser: I don't think you guys should break up.
Nic: No? Why's that?
Laser: I think you're too old.
Nic: [wryly] Thanks, Laser.
[Jules grins and puts a hand on Nic's knee, and Nic covers the hand with
her own]

At film's end, Joni is off to college and Laser has given up his mean-spirited and problematic "friend." The kids, indeed, are all right. We must ask, however, how about the mothers?

If I was slightly confused by sexual issues in The Kids Are All Right, I was even more puzzled by the social relationships of the central couple, Tom and Gerri (Jim Broadbent and Ruth Sheen), in Mike Leigh's Another Year. The couple is portrayed from the beginning as nearly perfectly happy, living in a lovely, if modest, townhouse, gardening away their free time, and mutually cooking up tasty lunches and dinners. In their plain simplicity (of appearance and behavior) they are near perfection, politically and socially aware—Tom is an soil engineer and Gerri a psychological counselor—caring for their friends and carbon footprints simultaneously. There is only one very serious problem: all their friends and, in Gerri's case, clients, are dreadfully unhappy, themselves uncaring or inordinately selfish, nearly unable to make their way through the daily events of life.

This fact makes a film that is so brilliantly acted and directed that you want to cry, a true mystery. What are you to think about these figures? How are you to care for them? At first, the audience is lead to truly admire the gentle support and caring of Tom and Gerri (who lovingly joke at their own moniker). But the interlopers into their life bring with them an immense strain that effects not only the heroes but the audience as well.

Gerri's co-worker, Mary (Leslie Manville), is the most insistent visitor to their flat, bringing with her each time a kind of reckless emotional abandonment which she tries to cover over with a feigned sense of joy of her clearly empty life. Manville is one of the most brilliant actors I have seen in film in the last few years, and it is a wonder just to watch her up close as Leigh shoots his actors, shifting her face from instant to instant as she attempts to deflect reality and to erect barrier after barrier to hide the wreck of her life. A lift of the eye, a sag of a check, a hand brought up to follow the curl of her hair—everything, in short, reveals her suffering, helped along by large doses of wine. As the film progresses (Leigh has loosely structured the painful encounters in the cycle of the seasons), and Mary buys a car she dangerously maneuvers through the streets, we feel more and more distressed by her very being. Will she survive the next scene?

While Mary babbles into a drunken collapse, other figures glower in the corners: the couple's old friend Ken, an overweight, cigarette-smoking, beer-drinking clown of man, who cannot get out of his work-a-day rut; Tom's dour, nearly mute brother, Ronnie; Ronnie's violent son; and others who lend to the film, even when Leigh is not portraying it, the sense we are attending a wake. As the narrative unfolds, we can only ask ourselves, why hasn't this couple chosen to have some friends like themselves? If they absolutely radiate joy, then why have they chosen these apparent "losers," readily inviting them into their house, where they sustain them but, also, behind their backs, express their frustration about their friend's drab lives?

What becomes quite apparent is that this "happy" couple has sought out these very individuals to help them sustain their own sense of "superiority." Perhaps that is too strong a word; certainly it is not a word that would come out of their saintly mouths. It may be simply a kind of dependency. Yet as time passes, and another year comes into being, we begin to realize a certain smugness on their parts. When their son Joe (who also works as a kind of social caregiver, offering legal help) brings home a new girlfriend, Katie, the couple are absolutely delighted. Katie is a quite chipper and outspoken individual, also a caregiver (she cares for older people) who perfectly fits their mold. Mary, however, although older than Joe, has deluded herself that she and Joe might one day develop a relationship, and quite nastily snipes at the woman she sees as an interloper. The result is that, until the final scene of the film, Mary is ousted from her "adopted" home, locked out of her friends' love.

When she shows up again at their house, desperately in need of emotional support, she finds only the brooding Ronnie, who has come to stay a few days to recover from his wife's death. Convincing him that she is truly a friend of his brother and sister-in-law, she enters the house, making herself a cup of tea, chatting with the equally emotional dead brother. What is remarkable is that together, frail as they are, the two begin to develop a relationship, a friendship, at least, that it is clear the anointed Tom and Gerri might never have elicited from them.

Upon the couple's return home, they are both quite aghast at Mary's intrusion, and Mary is devastated by the knowledge that she is no longer welcome in their house. Despite the fact that Joe and his girlfriend are coming for supper, Gerri invites Mary, out of pity, to dinner. But this meal is quite different from all the others. The conversation this time centers entirely on Katie, the girlfriend, and her questions about Tom and Gerri, who grandly—and quite boringly—describe their trip around the world early in their relationship. Mary and Ronnie are set afloat, nonentities at the table of love, and Leigh ends the film by focusing on their silent endurance. But it is an endurance that, strangely, now makes them stronger somehow than the blessed couple. And we end the scene almost pitying these happy spouses and their perky new daughter-in-law, while recognizing the remarkable survival of those who may never find such happiness.