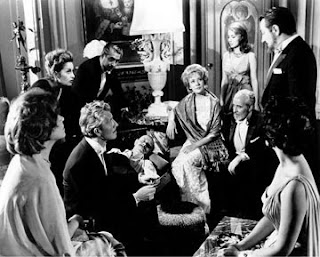 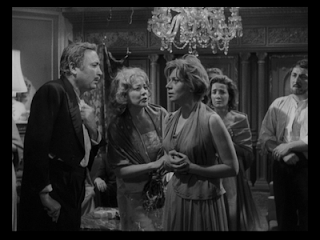 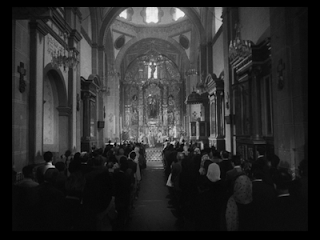 HISTORY REPEATS ITSELF
by Douglas Messerli


“Ever since Thucydides wrote his history, it has been on record that when the angel of death sounds his
trumpet the pretences of civilization are blown from men’s heads into the mud like hats in a gust of wind.”
—George Bernard Shaw

A large dinner is under preparation as Edmundo, the Marqués of Nobile, and his wife Lucia are soon returning to their mansion for an after-opera dinner with a couple dozen of their friends. A servant, Lucas, suddenly determines to leave and as he attempts his escape is apprehended and fired by the Majordomo. Two kitchen maids and the sous-chef also feel a compulsion to leave the house: “I’ve got to get out of here. I can’t stand it anymore,” says Camila. As the two women attempt their exit they are met with the returning host and hostess along with the dinner guests; they hide in the nearby room while the guests move up the stairs to divest themselves of their coats and wraps.
When the two women come out from hiding, the scene is repeated, as if the film has gone into loop. The host and hostess arrive with their guests again, reenacting the scene just previous. It is apparent that this will be a most unusual night.
The “strangeness” of the events continues as, after some small table talk, the hostess announces that tonight she has changed the “natural order of the menu,” intending to begin the evening with a Maltese stew of liver, honey and almonds in a savory sauce—an appalling combination—served as an hors d’oeuvre to increase the appetite! As the waiter bears the platter to the table, he stumbles, spilling its contents to the floor. After a brief silence, all break into laughter: apparently Lucia is known for her “surprises,” what one guest describes as her “special ‘chic.’”
Lucia, leaving her guests in order to check on the rest of the meal, is met by a large brown bear, another of her intended surprises. Later, a small group of sheep are witnessed; another intended surprise? If wasting food and intermingling live animals while eating dead beasts is “chic,” Buñuel humorously suggests, we might do well to question these sophisticates’ values. It is little wonder that, as Julio reports to Lucia, the servants have inexplicably deserted the house.
Downstairs in the kitchen, the last remaining denizen, the sous-chef, when encountered by his mistress, insists he also must depart. Lucia fires him on the spot. The service is left to the Majordomo.
So begins Buñuel’s masterful film, El Ángel extermindaor (The Exterminating Angel), an enigmatic work, arousing great confusion and speculation with regard to its meaning(s) upon its release in 1962 at the Cannes Film Festival, where it received the International Critics Prize. Buñuel clearly foresaw the difficulty his viewers might have in comprehending his work, prefacing it with a written warning:

If the film you are going to see strikes you as enigmatic or
incongruous, life is that way too. …Perhaps the best explanation
for Exterminating Angel is that, ‘reasonably, there isn’t one.’”

Indeed, a movie without explanation is a marvelous conceit—an idea that might have been far preferable to the somewhat ludicrous attempts at explanation of the film, one in which Nobile’s house is compared to the Hebrews in the desert ultimately released from the curse of God; another that it is one of the guest’s, Leticia’s, fantasy; a third that it is a film about the inability of satisfying a desire.
The remaining “plot” of this anti-narrative film is basically one of inaction: the guests finish dinner and after-dinner pleasantries, and, discovering the lateness of the hour, find they are inexplicably unable to leave. Gradually, they fall into a sort of trance, and sleep.
The next morning they are quite hungry, and are served only coffee and cold cuts. As the hours, then days pass, this aristocratic group gradually is forced into the most rudimentary of conditions as one of their members dies, sanitation fails, and a small cache of Nobile’s drugs are abused. Two lovers, Eduardo and Beatriz commit suicide, while the group captures the marauding sheep and breaks into the plumbing for water. Civility has been destroyed as one man attempts to rape sleeping women and others violently attack their gracious host, holding him responsible for their current condition.

After several days, during which outsiders have also found it impossible to penetrate the gate of Nobile’s estate, the servants magically reappear at the entrance. Within their prison, which looks now more like a pigsty than an elegant drawing room, the former party-goers circle about until Leticia perceives that all have amazingly realigned themselves back into their very positions of the first night, as they listened to a piano performance by Blanca. At Letitia’s urging, they repeat their conversation of that evening, and are suddenly released, staggering as a small group of survivors out of the house at the very moment the servants cross through the gate into the yard.
A miracle has occurred, and, presumably days later, they gather in the cathedral in celebration and thanks of their release. As the service ends, the priests suddenly delay their departure, as do the communicants. All are now trapped within the church. As the camera pulls away, we can see in the nearby streets soldiers—clearly Franco’s soldiers—attacking the citizens of the city.
Perhaps we should end there, as the filmmaker argues, without an “explanation.” Yet the film seems to demand one, calling up many possibilities of meaning— which is why, in large, this motion picture is so compelling. Without further commenting on the various interpretations mentioned above, I would argue that the film is quite clear to me in its political commentary: that, while Spain’s Fascist government is busy destroying its citizens, the aristocrats and clergy find themselves unable to act or speak out, revealing, accordingly, their own underlying bestial natures. The bear and sheep that move about the estate, as well as the sheep that are seen later outside the cathedral, represent both the brute violence and stupid placidity of these people of great wealth and power.
Buñuel, however, perceives this simple fable in terms that are larger than just the Spanish situation. Indeed, there is almost a mythical component to the occurrences of this film, which is, perhaps, why the time and place of the events are so indefinite. Clearly a locale in which Spanish is the language, the Calle de la Providencia, a street of “divine destiny,” might, nonetheless, be in any city, “Paris or London,” as the director suggests. For the key here, as Buñuel has indicated both through his cinematic structure and his narrative, is repetition. Just as the two maids are startlingly greeted with a repeat performance of the guests’ entry into the house, so must the guests repeat their “performance” before they can exit, so must history repeat itself with a second imprisonment. In a world in which the rich and the poor, masters and servants live in opposing worlds, no lessons are learned; history repeats itself. To quote Shaw once more: “Hegel was right when he said that we learn from history that men never learn anything from history.” The wealthy and pious will inevitably retreat from their social responsibilities as everyday citizens are attacked and destroyed over and over again.