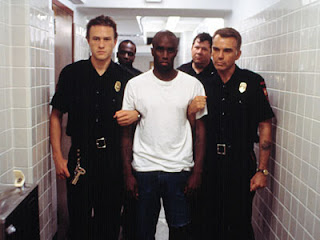 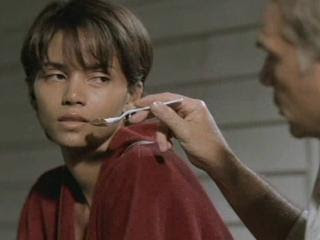 WHEN YOU FEEL LIKE YOU CAN'T BREATHE
by Douglas Messerli

If for no other reason, Monster's Ball deserves our notice simply for devoting its first hour and a half to a series of nearly unbearable events, beginning with the execution of a penitentiary prisoner (played by Sean "P. Diddy" Combs), followed soon after by a series of racist acts played out by the movie's major figure, Hank Grotowski (Billy Bob Thornton), a fight between Grotowski and his son, Sonny (Heath Ledger), Sonny's suicide, and the death, by a hit-and-run car, of the child of the executed prisoner. And that's only the beginning: the dead prisoner's widow's car breaks down, she (Halle Berry) loses her job and faces eviction from her apartment.


While all these events are painfully riveting (tears rolled down my face for much of the film), the writers of this work, Milo Addica and Will Rokos, have embellished their characters with so many dilemmas, along with layers of guilt, silent suffering, and social and political injustices, that it is difficult, at moments, to see through to their humanity upon which the rest of the film depends.

Like his own father, Hank has remained a tower of strength by refusing to face anything coming close to friendship or love. He is a silent loner, choosing not even to face the prostitutes he fucks, rejecting any demonstration of love to his son, and, following in his father's footsteps, ignoring any of the strides of equality made by Blacks in the South. Leader of the correctional officers at the local State prison, he determinedly employs protocol as they prepare to execute their prisoner, urging his men, including his own son, to put all feeling behind them: "You can't think about what he did or anything else about him. It's our job."

Yet through a meeting with the prisoner with son and wife and of the focus of the camera on the suffering prisoner (who, for a few dreadful moments, cannot catch his breath for fear of his approaching death), one very much does wonder about what he did and are caught up with his life. One readily comprehends, why, as they take the prisoner on his "walk of death," Sonny vomits; but it is for the other officers an unforgiveable act of personal expression.

After the torturing series of electric shocks sent through the prisoner's body, Hank confronts his son, leading to an intense fight. The next morning he orders him out of the house. The younger man threatens him with a gun, ending in the downstairs living room , where he challenges his father: "You hate me?" When Hank admits, "Yeh, I hate you. I really do," the son wails back, "Well, I always loved you," as he puts a bullet through his head. When at the funeral the priest asks him if Hank should read a particular passage from the scriptures, the father vengefully replies: "All I want to have is that dirt hit that box."

It may be a stretch for the viewer, accordingly, to understand why this martinet of a man suddenly quits his job, and soon after, develops a relationship with a Black waitress—the wife, it turns, of the man who he has just executed—beginning with his decision to help her rush her dying son to the hospital and falling, a few frames later, into a frenzied sexual union in which the couple release their pent up tension, anger, and hate. Upon discovering her identity through a photograph of her husband and a sheaf of drawings she shares with him, he, like his son, vomits out of sympathy and self-disgust. They both have experienced moments, as Hank suggests, when you feel like you can't breathe.

Leticia visits her new lover's house, gift in hand, in response to which Hank's father attempts to displace his son's new companion, with a racist comment. In reaction, Hank places the old man in an assisted living facility, inviting Leticia into his house and bed. They both, presumably, have been born again; yet we have a hard time understanding their transformations, for we are allowed to witness only the aftermath. Such miracles may indeed happen, but in order to sympathize with these new beings, we have to first comprehend them as humans instead of the typological characters to whom have been introduced.

It appears that even the filmmakers are not sure their characters' sudden love will survive. As Hank goes to fetch ice cream in celebration of their new life together, Leticia wanders to the attic, where she discovers the drawings her husband has made of Hank and his son on the last night of his life. The secret history of her lover is suddenly revealed, and her passionate response is, understandably, fury. When he returns, however, and she is invited to join him on the porch, she says nothing about her discovery, as he quietly speculates: "I think we're going to be all right." Perhaps history, in world such as the one these two beings have inhabited, is best forgotten.