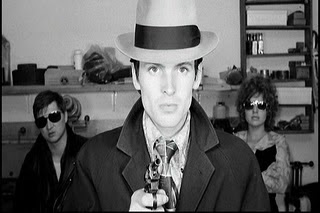 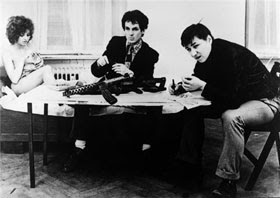 THE PROFESSIONAL FRIEND
by Douglas Messerli

Fassbinder's first film, Love Is Colder Than Death, is both a comic work and a series of homages to various French New Wave directors, including Claude Chabrol and Jean-Luc Godard. But it also, coming as it does two years after Bonnie and Clyde, tips its hat to the American director, Arthur Penn, several times. There are moments in this film, a work filled with references to American gangster movies and American-produced objects, where Fassbinder seems to be quoting images and even scenes from Bonnie and Clyde, while simultaneously working against them.
Certainly, the "situation" of the film nicely parallels the Bonnie and Clyde figures. Like Clyde Barrow the hero, Franz Biberkopf (played by Fassbinder himself), is a petty criminal; most of his money, however, comes from pimping his girlfriend, Johanna (Hanna Schygulla). Despite their small time activities, however, it appears that they have caught attention of the "Syndicate," who want Franz to join them. His refusal ends with his being beaten. Yet he remains determined that he wants to be free, to work for himself.
Among the others that the Syndicate is attempting to recruit is a knock-out beauty of a man, impeccably dressed in a suit, Bruno (Ulli Lommel). As Fassbinder's camera focuses intensely for what seems like several minutes upon his image, the closest thing possible to a cinematic "swoon," we quickly recognize that Franz has fallen in love. As the men bed down for the night, Franz drops his blankets immediately next to the prone man. Yet hardly any communication occurs between the two, except a kind of weak friendship, in which Franz calls Bruno "Kid," and invites him, when he is released, to share his and Johanna's flat in Munich.
Indeed, in these early scenes not much is said, but the entire context of this gangster film is established. In what may appear, at first, to be ridiculously bad acting, Franz punches out one of the thugs—without touching him! Fassbinder plays out the scene almost in Kabuki style, and the violence portrayed throughout the film is consistently presented as something occurring off screen. We witness only the gun going to the head, never the slug. The gunfire of Bruno's later murders, sounds like it comes from another room. In short, this is a violent film with hardly any violence. Fassbinder has perhaps made us even more aware of the coldness of their acts by presenting them as theatrical tropes instead of realist events.
Similarly, the love between the two men is never represented by any sexual or even sensual act. Indeed the two seldom even touch. Yet the way both men observe and relate to Johanna, one can easily perceive that any love in the room is between the two men. At one point, when Johanna, laughs at a few caresses Bruno has proffered her, Franz slaps her face. Her confusion for his act is answered as simply as it might be: "He is my friend." In short, just as Fassbinder has removed all the realism surrounding violence in this quite violent story, so too has he erased any physical representations of love in what is quite clearly a homosexual romance.
In fact, Fassbinder goes even further in that respect by slowly revealing that Bruno has not come as a real friend, but, having given into the Syndicate's demands, has come as "a professional friend" to involve Franz in a series of escalating crimes and, finally, to kill him.
The crimes they undertake, however, are once again insignificant or even meaningless. Their first "caper" might as well have been undertaken by the characters of Breakfast at Tiffany's instead of a crime movie. All three approach a shopclerk selling sunglasses, riddling her with questions that confuse her just enough that they can each slip a pair of glasses in their pockets.
A trip to a gun-selling cobbler results in their acquisition of guns (real and fake) and ends with the cobbler's death.
Their third "heist" is the pocketing of a few bottles and packages from a grocery store!
Their next action, however, is brutal: Bruno shoots the Turk who has threatened Franz's life. The additional murder of the waitress, moreover, reveals to us just how cold runs Bruno's blood.
Even though all the shots have come from Bruno, Franz is later arrested and kept in jail overnight. But here too, Fassbinder, sucks all the drama from the event, as the detective asks him over and over where he was at a certain time, and who he was with. The police seem as ineffective as Franz is as a criminal.
Their final foray into crime is a planned bank robbery. By this time, however, Johanna has grown so jealous of Bruno that she calls the police. At the very same moment, men from the Syndicate are preparing to kill Franz, sitting in the get-away-car, and, as the police close in on Bruno (who is armed, incidentally, with a dummy machine gun instead of the real thing), the men from the mob take off. The police shoot Bruno, and, in the only true sign of the depths of his love, Franz pulls out a gun threatening them as he clumsily collects Bruno's body.
Even the final chase is unlike any other in the genre. Once he discovers that Bruno is, indeed, dead, he stops to toss away the body, speeding ahead, while the police, preoccupied with the body, seem to abandon all else. Love is indeed cold, made even colder by Johanna's admission that she had called the police. Suddenly recognizing that he has been betrayed by everyone, Franz spits out the word "whore," suggesting that their relationship has also fallen dead.