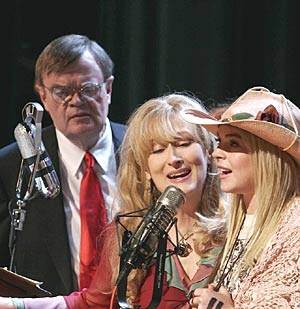 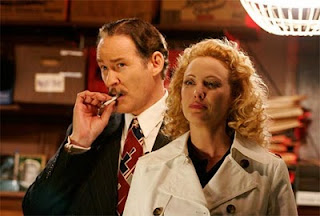 THE SWEET BYE AND BYE
by Douglas Messerli

Two penguins are standing on an ice floe. The first penguin
says, “you look like you’re wearing a tuxedo. “The second
penguin says, “what makes you think I’m not?”

She asks Keillor, “Why is that funny?” “I guess because people laugh at it.” “I’m not laughing,” she replies.
Indeed, it is not “funny” in a standard sense. As Henri Bergson tells us, most humor is based upon incongruity, upon something that would not be normally funny if it actually happened to us. The penguin joke—a perfect example of what Bergson describes as “inversion”—works because it so openly reveals our desire to accept the simulacrum instead the real. Since the penguin vaguely looks like he’s dressed in a tuxedo he may be actually dressed in a tuxedo. The joke points to our desires to believe in a reality that we know is untrue, our willingness to be gullibly deceived.
This joke, in fact, is at the heart of Altman and Keillor’s film. For the “strange nostalgia” that A Prairie Home Companion evokes is, like the penguin, a simulacrum of the American past, a past so wittily and craftily presented that Americans want to believe it even while recognizing its falsity. So too does this film present onstage a musical world so engaging—the songs, whose lyrics mostly were created by Keillor himself, seem close enough to the real thing that we enjoy them as if they were classics—that despite what the film has revealed about the offstage lives of these figures, audiences (the false audience of the film, the “real” film-going audience, and, evidently, most critics) cannot help but feel the immense pleasure of swallowing the sweet lemon drop.
The “dangerous lady,” however, is more than dangerous and more than a lady, for she is the angel of death, Asphodel. In nature, the asphodel is a narcissus-like flower. Accordingly, this “angel” suggests that we often love ourselves and our past, perhaps, more than a present filled with other living beings. Death is, so to speak, “in the house,” and she mercilessly slays not only a singer and the visiting Axeman (Tommy Lee Jones) out to destroy this artifice of nostalgia, but ultimately everything and everyone upon who she casts her cold eyes. As Keillor has warned us, he too will die—and so too will we. But the question remains, will we live our lives in acceptance of the truth of being or will we remain, like Yolanda and the other performers of homespun travesty, trapped in a mythologized invention of our experiences.
Keillor and Altman reveal that such a view of reality can only end up with Americans facing the same philosophical endgame that Yolanda claims to joyfully embrace. Americans, Keillor and Altman suggest, are so desperate for the simulacrum, so much in love with the sentimentalized past epitomized in dramas such as Our Town—a scene from which Yolanda quotes early in this film—that we are readily willing to abandon the truth of our daily lives. What will it take to awaken us? Keillor warns, “We are not a beach people. We are a dark people who believe it could be worse, and are waiting for it,” a people afraid of the light.
Within the movie, the characters do not awaken but, while dreaming of reviving their show, die, playing out their imaginary lives even in the sweet bye and bye:

Long-haired preachers come out every night
Try to tell us what’s wrong and what’s right;
But when asked about something to eat,
They just answer in accents so sweet:
“You will eat, bye and bye,
In that glorious land in the sky!
Chop some wood, ‘twill do you good,
There’ll be pie in the sky when you die.

Los Angeles, June 27, 2006
Reprinted from The Green Integer Review, No. 5 (November 2006).
Copyright (c) 2006 by International Cinema Review and Douglas Messerli
Posted by greenintegerblog at 8:08 AM