Joel Coen and Ethan Coen | O Brother, Where Art Thou? 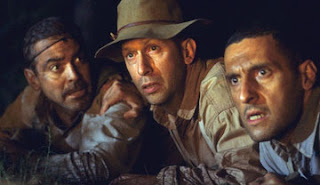 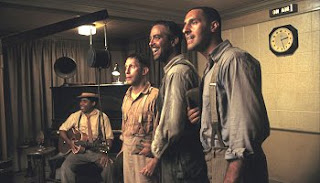 IN A TIGHT SPOT
by Douglas Messerli

Joel Coen and Ethan Coen (writers and directors) O Brother, Where Art Thou? / 2000

You can almost hear the Coen boys giggling when they prefaced their comedic masterwork, O Brother, Where Art Thou?, with a translation of the opening line of Homer’s The Odyssey, "O Muse! Sing in me, and through me tell the story..." The story they tell is not exactly Homer’s, but it has enough clever parallels to please almost any classicist and peak the interest of almost any literate moviegoer.
The escape from the Parchman Farm by Ulysses Everett McGill (George Clooney) chained—for life it seems—to the not so very bright Pete (John Turturro) and Delmar (Tim Blake Nelson) begins with a hilarious attempt for the three to hitch a ride on a freight car. Ulysses (better known as Everett in the Coens' telling) makes it on, and, finally Pete, as Delmar fails, pulling the other two back to earth with the recognition that, like the mythical man, the foolishness and mutiny of his crew will result in failure for the hero time and again. He is, after all, the only one of three with the ability of abstract thought.
Everett has told them he has buried $1 ½ million he has stolen from an armored car, a treasure that needs to be retrieved quickly before it is flooded over in the creation a new hydroelectric project in Arkabulta Lake. Yet the three are apparently going nowhere—that is until they meet up with Tiresias, the blind prophet who predicts their future, while carrying them away on a slow-moving railroad hand car.
At Pete’s cousin’s house, they are freed from their chains, whereupon Everett carefully applies his Dapper Dan pomade, (later the self-conscious lothario is seen wearing a hair-net), one of his ridiculous eccentricities that gets him into trouble throughout their voyage. And no sooner do they get a moment to rest in the cousin’s barn than their Poseidan, the Sheriff, rolls in, the cousin having turned them in for monetary reward. If Ulysses was a hero, this modern-day version is a terrified fool, shouting over and over again, “We’re in a tight spot!” Despite a fire, they escape.
They are now stuck in the middle of nowhere, sitting in a field as they ponder what each may do with their money. Everett will return to his family, he declares, while Pete is determined to become a maitre’d; Delmar plans to buy a family farm.
Before long they are the road again, this time to encounter the Lotus Eaters in a mass gathering of religious congregation of seemingly hypnotized believers heading toward the river to be have their sins washed away. The event is so mesmerizing that Delmar quickly joins in, joyful in having a chance for a new start.
Their accidental meeting with a young Black man, Tommy Johnson (Chris Thomas King) who claims to have sold his soul to the Devil, leads the trio onward in the direction of a small radio station in the middle of nowhere, ending with they’re being paid to make a record, as the movie is transformed, in part, to a musical, Tommy, an excellent guitarist, joining the three who now call themselves The Soggy Bottom Boys, in a rendition of “Man of Constant Sorrow.”
Unknowingly to them, the song becomes one of the most popular pieces of music in the South. Indeed, the Coens’ movie score, which includes dozens of bluegrass and country western classics, won a Grammy award for the album of 2002, bringing platinum sales of 7,421,000 copies sold in the US by October 2007. Several of the film’s real singers gathered for a concert tour, Down on the Mountain, which itself was filmed.
Other adventures follow. At one point a lone car arrives to save the day, but within, we soon discover, sits a young bank robber, Pretty Boy Floyd, as if the trio had suddenly entered another film like Dillinger or The Grapes of Wrath. Indeed they have, for the writers-directors have not only layered their comic froth with references to The Odyssey but riddled it through with a whole series of Hollywood films. The title itself is a reference to Preston Sturges’ comic masterpiece, Sullivan’s Travels, a movie whose scenes parallel those of the Coens' work throughout, particularly when they later sit in a theater where their former prisoner cronies are brought in for a moment of pleasure en masse.
Accordingly, it is not surprising that the three participate with Floyd’s brazen bank robbery, following it up with another Odyssean encounter, this time with the sirens. Upon awaking in a daze, Everett and Delmar find Pete’s clothes without him in them. When a small toad pops out of Pete’s coat, Delmar is convinced that he has been transformed, as were some of Ulysses’s men, into a beast—instead of a pig, in this case into a frog.
The two soon meet up with a traveling bible salesman right of Flannery O’Connor, who promises to involve them in the business. But as soon as the two join up with for a country picnic with the one-eyed salesman (the incomparable John Goodman), this Cyclops wallops them over their heads and steals their money.

A later hitch takes them back through the chain gang, where they discover Pete has again ended up, having divulged the fact of the treasure and their destination. By this time, however, the movie has grown so giddy (at least its creators have) that the hero admits it has all been a grand whopper; there is no treasure! He was arrested not for stealing but for passing himself off as a lawyer, and his goal all along has been to return to and reclaim his own Penelope, Penny (Holly Hunter), a woman who has told his children that he’d been hit by a train and has taken up with Vernon T. Waldrip, an effete man who, we later discover, is involved with the Ku Klux Klan.
Another escape results in their accidental confrontation with a grand Klan meeting, where they discover Tommy Jones is about to be hung. This time, the reference is to another kind of musical, The Wizard of Oz,, where, like the Scarecrow, Tin Man, and Lion observing the evil army of the Wicked Witch, they quickly change into the clothes of the enemy, grabbing Tommy and escaping once more.
It hardly matters that behind this new adventure lies a couple of battling governors right out Finian’s Rainbow (one of them the Grand Dragon of the Klan). The adventurers, transforming themselves once again into singing sensations, win the day for the good old boy incumbent, outing the would-be upstart. A full pardon is granted, but before the boys can let out even an Hallelujah, Everett’s Penelope proclaims she will not take him back until he has retrieved her ring!
Strangely enough, accordingly, the Coens' shaggy-dog tale ends up in Wagner, as the three return to the very same cabin nearby which Everett once told them he had buried the treasure. The sheriff, having done digging up of his own, awaits their arrival, and this time it truly does look like they’re in a tight spot from which they cannot possibly escape.
Remember that hydroelectric project? Well, today is that day, the water flooding over the region, helping them to escape yet once again, ring safely in Everett’s hot little hands, as our weary heroes return home.
But just as in The Ring Cycle, the whole thing has the potential to begin all over again, particularly when Penelope announces that he has returned with the wrong ring!!