Alfred Hitchcock | Strangers on a Train 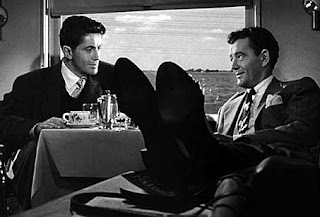 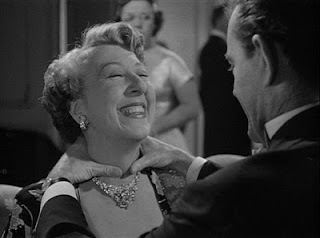 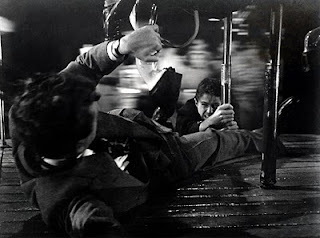 Czenzi Ormonde (screenplay), listed with Raymond Chandler (who do not write the final version), based on an adaptation by Whitfield Cook of Patricia Highsmith's novel, Alfred Hitchcock (director) Strangers on a Train / 1951

Strangers on a Train has long been one of my favorite Hitchcock films, and with the news yesterday of the death of one of the film's stars, Farley Granger, I felt it was time I wrote about this work.

I have seen this film dozens of times, and over the years I often mused about a silly game I might undertake, suggested by the phrase "criss-cross," which Bruno Antony (Robert Walker) uses to describe his plan for murder. Using the characters of this film, and applying a version of "six degrees of separation," I felt I could link all to people who I had met or known. For example, Robert Walker was married to Jennifer Jones until her affair with David O. Selznick. In 1971 Jones married art collector and philanthropist Norton Simon, with who my companion Howard met several times when the Norton Simon Museum was contemplating loaning some of their contemporary art to the Los Angeles County Museum of Art. Four separations.

One of Farley Granger's earliest performances was in a play by Lillian Hellman, a friend of Djuna Barnes whom she helped support in Barnes' later years, by slipping envelopes of money under her door. I had met and interviewed Barnes in 1973, a few years before her death. Three separations.

In his autobiography West Side Story librettist Arthur Laurents writes of his affair with Farley Granger while working on Hitchcock's film Rope. Tony in the film version of West Side Story was played by Richard Beymer, who attended my literary salons several times. Three separations.

Another of Granger's lovers was composer-director Leonard Bernstein who personally encouraged my friend Charley Wine to become a composer. Three separations again!

The year after Strangers on a Train, actress Ruth Roman played in Young Man with Ideas with Nina Foch, who taught acting to and befriended Howard's Aunt Lillian (who've I met several times). Three separations.

My parents once reported that they, too, had met Nina Foch in a 1956 visit to Los Angeles, when she was at work on The Ten Commandments (although I have no idea, how and why this meeting took place).

In any event, this linking could go and on, although if one must ask, to what purpose? I suspect that my desire to interconnect this way has something to do with the structure of Strangers on the Train, where several different individuals cross paths, echoing and effecting one another. Indeed in the case of the two major figures of the film, Guy Haines (Farley Granger) and Bruno Anthony, there is no separation. Once Anthony has recognized Haines on the train, intruding upon the famed tennis player, ("I beg your pardon, but aren't you Guy Haines?") the two become almost inseparable, dining together in Anthony's small train compartment, and conversing about all things from tennis to Anthony's strange philosophical views ("I have a theory that you should do everything before you die.").

Although we know from the beginning that Haines is dating and hoping to marry the lovely senator's daughter, Anne Morton, as soon as he can divorce his wife, Hitchcock plays out this strange encounter as a kind of gay pickup, clearly toying with Granger's real-life bisexuality and his astonishingly good looks. Why else would Guy allow himself to be literally swept-up by the foppish, mama's boy Bruno (who in some scenes, looks nearly as handsome as Guy), who ultimately consumes him into the vertigo of his murderous intents. Before Guy can even display his discomfort, Bruno has outlined a plan whereby he will kill guy's wife if Guy will kill Bruno's father, the ingenious game he describes as "criss-cross."

Guy's inadequate response—"I may be old-fashioned, but I thought murder was against the law."—reveals both his inability to comprehend this absurdity and suggests a darker possibility, that he is not at all adverse to the idea.

In Highsmith's novel, Guy does go through with his part of the crime, and is imprisoned; in an earlier script by Raymond Chandler, a script which Hitchcock hated and tossed into the wastebasket while holding his nose, the film ended with Haines in a straight-jacket. So the doppelganger aspects of Haines and Anthony appear to be innately within the structure of the work, suggesting a kind of fused being with a Dr. Jekyll and Mr. Hyde personality.

From the moment of Guy's and Bruno's meeting, there is no escaping each other, reiterated when Haines meets up with his wife, who refuses to grant him a divorce. Haines' fury as he calls back to Anne Morton in Washington, D.C., again points up a kind of receptivity to Bruno's mania : "I could kill her!"

Bruno's acquisition of Guy's lighter along with his murder of Guy's selfish wife doom the tennis player to be entrapped within Bruno's perverted universe. Suddenly Bruno is everywhere, talking to Guy's friends at the tennis courts and even attending the senator's parties, where we truly experience Bruno's madness:

BRUNO (to the Senator) How do you do, sir? I'd like to talk with you sometime, sir, and tell you about my idea for harnessing the life force. It'll make atomic power look like the horse and buggy. I'm already developing my faculty for seeming millions of miles.

By the end of the evening he has almost unintentionally strangled one of the senator's guests, making his daughter (Ruth Roman) suspicious that there is a link between her lover and the interloper, which she expresses to Guy almost as in a jealous anger:

The "doing" obviously is murder, but it suggests another "doing," the sexual act, (con)fusing the two. By film's end, Guy is forever wed to Bruno. What he says of the detective following him might also be said of his "double": "He sticks so close he's beginning to grow on me—like a fungus."

When Guy refuses to participate in his half of the "bargain" with this devil, he precipitates a series of events wherein almost everyone in Guy's company are swallowed up into the secrecy and anguish facing him, including Anne (who, visiting Bruno's mother, tries to convince her of her son's guilt) and the senator's other daughter, Barbara (Patricia Hitchcock), who up until now having taken the whole thing as a lark, suddenly realizes it was her face on which Bruno was fixated while nearly asphyxiating the woman at the party, a face, primarily because of her glasses, resembles Guy's wife Miriam.

It is as if Bruno is a kind of whirlwind force that sucks all those whose paths he crosses into his insanity. Accordingly, it is no accident that, in his attempt to implicate Guy in the murder of his wife by planting his lighter at the scene of the act, he and Guy are swept away in a battle upon a carousel, whirling out of control, where innocent children are hurt and possibly killed as well.

Even as he lies dying, Bruno will not give up the evidence of the lighter or the truth, keeping like a fetish the links he still has to Guy Haines' identity. Only in death will he free his "other."

For good or bad, this movie reveals, we are all intricately intertwined. Is it any wonder, in the final moment of the film when another stranger asks of the tennis player, "Aren't you Guy Haines?", he and Anne get up and move away. Perhaps, teases Hitchcock, it's better not to know your neighbors, issues this director will take up again in his 1954 movie, Rear Window.

At the same time, to be accused of something you did not do merely through association brings up issues that were boiling over in the public sector when Strangers on a Train was made, namely what was later described as the "Red Scare," including the arrests of Julius and Ethel Rosenberg in 1950, and, that same year a governmental connection of homosexuals and communists laid out in the government-published report, Employment of Homosexuals and Other Sex Perverts in Government—issues Hitchcock would explore in his 1956 film, The Wrong Man.