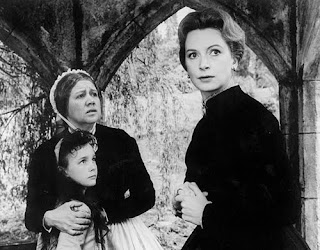 THE PERFECT KISS
by Douglas Messerli

William Archibald and Truman Capote (screenplay, based on a story The Turn of the Sscrew by Henry James), John Mortimer (additional scenes and dialogue), Jack Clayton (director) The Innocents / 1961

After seeing the Los Angeles Opera production of Benjamin Britten's The Turn of the Screw, I determined to revisit Jack Clayton's 1961 film, The Innocents, based on the same James novella. Although I saw it the year of its release, I had not seen it since, forgetting almost all of its details.

Although the plot remains the same as in the opera, with a new Governess, Miss Giddens (Deborah Kerr) coming to care for Miles (Martin Stephens) and Flora (Pamela Franklin) in Bly hall, the effect is far different from the Britten piece, and significantly more focused on the psychological, more even than James, who was certainly a psychologically-focused author.

Although it is often described as a variation of a horror story, even being named one of the 11 best horror films of all time, I wouldn't describe it as having any real horror, and, perhaps, not even ghosts. It is apparent from the beginning that the young governess (Kerr, a not so young 40 at the filming), the daughter of a minister, is completely inexperienced with regard to worldly matters. Indeed, except for the fact that Kerr is always so capably in command, we might suggest the character is still a kind of child. And, for that reason, it might have been better to cast a ingénue in the role instead of the gifted Kerr. Nonetheless, Kerr works hard—and somewhat successfully—to convince us of her innocence. If nothing else, we realize that she has no clue of how to deal with children, and is far less sexually aware than they are.

Of course, Miss Giddens has led a thoroughly protected life, while the children have come under the influences of Miss Jessel (Clytie Jessop) and Peter Quint (Peter Wyngarde), who, at least according to the housekeeper, Mrs. Grosse, became sexually involved, performing their sexual acts openly, perhaps even where the children might see them. Quint, moreover, was a close companion to Miles, as Miss Jessel was to Flora. Yet Clayton's film strangely resists any of the suggestion that pilots Britten's interpretation that Miles and Flora might themselves have been the subject of sexual abuse. Here, the ghosts of the past where apparently only bad influences upon the children, not perpetuators of horrors.

In fact, Archibald's and Capote's screenplay strongly plays down the idea that there really are "ghosts." Every sighting of these figures is made by the Governess alone, while the children and Mrs. Grosse claim to not be able to see anything where Miss Giddens points. Unlike the haunting ululations of Britten's Quint, these ghosts never speak.

It is quite apparent, in this version, accordingly, that much of the surrounding "horror" of Bly belongs to the imagination of Miss Giddens, which narrows the possibilities of James' original significantly. By so clearly suggesting that it is all the product of a slightly hysterical woman, Clayton loses much of the richness and, most certainly, the true darkness of James' original. Cinematographer Freddie Francis does his best to hint at the "blackness" of the place by filming brightly lit objects against totally darkened backgrounds, and positioning objects at long distances from each other. Yet, in the end, these often seem like gestures towards something that we cannot truly believe is there.

What the film does offer in place of the suggestion of child abuse is the children's eroticism, expressed in their constant whispers and strange outbursts—amid absolutely perfect behavior—of obscene language and violent acts, and, in Miles' case, a flirtatiousness that suggests experiences far beyond his years. The most notable of these is the long kiss upon the lips he gives Miss Giddens, and her inability to reject it demonstrates that it may be her first kiss, a kind of "perfect" kiss since it cannot be reciprocated, only enjoyed. There need not nor cannot be any emotional commitment on her part, the perfect way for an old maid to enjoy that in which she is too frightened to participate.

Nonetheless, Miss Giddens has, at least mentally, committed herself to Miles, and she is clearly jealous of the dominating past Peter Quint and Miss Jessel represent (even if it they are specters of her own imagination). Her only way to free the children of that past, is to cast out the demons, psychologically speaking, by having her charges admit they are communing with the dead.

Flora goes into an absolute fit, spewing out obscenities, according to Mrs. Grosse, of which it should be impossible for her to have knowledge. Miss Giddens packs off Mrs. Grosse and Flora to her uncle, despite his commandant to leave him out of any family situation. Suddenly she is left alone with what is now the focus of her misguided love, Miles.

If she can only get him to say Quint's name, she muses, as if the saying of the name were a magic elixir that would free him from all former influences. Symbolically speaking, that would mean that he would have no past—in short, it would mean his death. Which, as he speaks out Peter Quint's name, comes to pass. She, at first relieved, goes to him upon his faint before discovering that his heart has stopped. Now there are no longer any consequences, and she can kiss him upon the lips as he had her. The abuser, so Clayton suggests, exists not in the past but in the present, trapped in innocence.