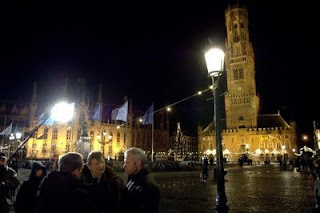 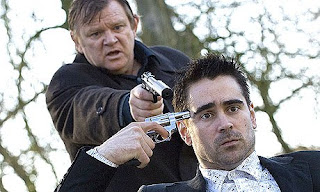 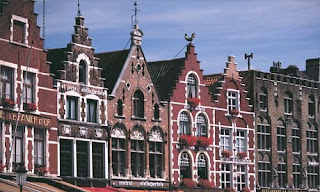 Martin McDonagh's 2008 film, In Bruges, is a movie that tries so hard to be likeable, that it seems almost mean-spirited to say anything else. By combining a witty and tough dialogue, dangerously petty criminals who are tender at heart, and story that walks a tightrope between a bloodbath and a tale of impossible love, the film pleads for its audience to find some kind of center with which to hold on.

It was hard for me, however, to believe in anything McDonagh had cooked up except for the beautiful streets and churches of Bruges where his preposterous plot takes place. The directors' characters, no matter how many "fucks" they spew and no matter how insensitive they are to human life, seem more like Damon Runyon figures than the London murderers they are supposed to represent.

Ray (a likeable Colin Farrell) and Ken (Brendan Gleeson) have just blundered in a hit, intentionally killing a priest their boss, Harry Waters (Ralph Fiennes) has ordered dead, but also unintentionally killing a small child as the bullet passes through the priest's body. Together this unlikely duo are sent out of town to the Flemish city of Bruges, until things cool down.

Ken, who has apparently been in the business for some years, is a slightly sophisticated and curious gay man, who is delighted to get the opportunity to see the beautiful "Venice of the North," while Ray, who is the one who accidentally killed the boy, is a course and most definitely heterosexual, undereducated Dubliner who has no patience for touring and even less time for Bruges:

There's a Christmas tree somewhere in London with a bunch of presents
underneath it that'll never be opened. And I thought, if I survive all this, I'd
go to that house, apologize to the mother there, and accept whatever punish-
ment she chose for me. Prison...death...don't matter. Because at least in prison
and at least in death, you know, I wouldn't be in fuckin' Bruges. But then, like
a flash, it came to me. And I realized, fuck man, maybe that's what hell is:
the entire rest of eternity spent in fuckin' Bruges. And I really really hoped I
wouldn't die. I really really hoped I wouldn't die.

Holed up in one room with Ken, Ray is a time bomb ready to explode, and does fizzle, at least, several times, punching out a Canadian couple who complain about his and his lady companion's cigarettes, and, latter, shooting out the eye of his girlfriend's cohort in crime (she picks up men after which her boyfriend shows up to rob them). There are a lot of absurd subplots, one about a movie being shot throughout the city with a dwarf (Jordan Prentice) as the lead (apparently Ray is fascinated by what he calls "midgets"), and other extraneous encounters.

The important thing, however, is that a strange rapport develops between the two criminals, Ken and Ray, as they take in the city sights. Despite his tough-guy demeanor, Ray is truly haunted by his act, unable to get it out of his head, and is seriously guilt-ridden, conditions which Ken tries to ameliorate without success.

By the time Ken hears from Harry that he must kill Ray, he discovers Ray holding a gun to his own head, about to commit suicide. Ken saves Ray's life, and sends him off by train to any other European town so that Ray can start over again, while Ken will be left to face the consequences.

The consequences, while at first cloaked in a sort of gentlemanly regard between Harry and Ken, quickly turns murderous, as Harry shoots out Ken's knees, and, discovering that Ray has been returned to Bruges by the police for the incident with the Canadian couple, runs from the tower into the square intending to kill Ray himself. To warn Ray, Harry jumps from the tower, sacrificing his own life for that of his friend-become almost a son.

For a brief time, the film switches to an action-adventure tale, as Harry chases Ray down the narrow, cobblestone Bruges streets. Returning to his hotel, Ray collects his gun, and jumps from the window into a moving canal boat below, Harry at the chase. Harry's final shot goes through Ray's body, hitting and killing the dwarf, which Harry believes is a child. A man of deep conviction if not of moral values, Harry turns the gun upon himself.

We end the film not knowing whether or not Ray has survived, but his voice pleading for his life, seems to suggest that he lived through the ordeal. The question is, which Ray? The murderous, crazy one? The boyishly good man at heart? The slightly clever conman? The drunken and drugged out lunatic?

The problem with nearly every figure in this film is that they have no center—as well as no place in which to exist. Ray's disdain of Bruges—as beautiful as the city obviously is—seems justified. Why "In Bruges?" You can almost hear McDonagh say, as might Harry, "Cause I'd like to fuckin' go there; it's a kind of fantasyland."

But so too is his film a kind of garish fantasy world where no real human being dare show up. All are types, figures shifting in and out of various situations and set pieces, drifting always between the humorous and the downright ugly. Who could ever believe characters who converse as follows?:

RAY: What am I gonna do, Ken? What am I gonna do?
KEN: Just keep movin', keep movin'. Try not think about it. Learn a new
language, maybe?
RAY: Sure. I can hardly do English.
[Pause]
RAY: That's one thing I like about Europe, though. You don't have to learn any of
their languages.

From a sort of conscience-ridden, even it sentimental pondering, we quickly jump to the kind of advice one might receive on a cozy talk show, then on to a self-aware joke that seems incompatible with Ray's previous behavior, straight to the beat (1-2-3) before the punch line, a stale joke about the loss of European countries' identities, all in a few short sentences and interjections! McDonagh seems unable to keep any one character in his mind for more than a few lines, so that ultimately we lose all possibility of belief in anything but the writer's whims.

Next time I go to Bruges, it will be alone!