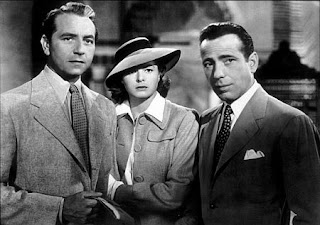 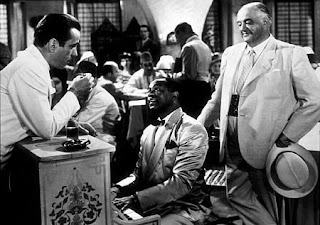 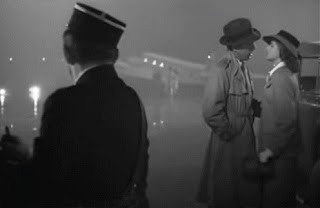 No sooner are we told that in Casablanca everybody "waits and waits and waits," than we are treated to an evening at Rick's, where the waiting, at least, is pleasurable, a place where "everybody comes" to hear music, drink, gamble, tell secrets and buy black market goods. Who wouldn't want to come?

On top of that the producers have emptied out the Warners Brothers' closet a host of character actors to support the three top stars, Humphrey Bogart, Ingrid Bergman, and Paul Henreid. Any movie that has Claude Rains, Sydney Greenstreet, Peter Lorre, S. Z. Sakall, Dooley Wilson, and Leonard Kinskey just has to be good, and Casablanca has dozens of other capable supporting actors as well.

Everybody probably has at one time spent the evening at Ricks, so I won't take up much time describing the plot. I simply remind the reader that, after running guns to Ethiopia, and fighting on the Republican side in the Spanish Civil War, Rick Blaine has opened a bar in Paris just in time to fall in love with a beautiful woman who abandons him the moment the Germans enter the city. Now in Casablanca he owns and manages his popular night spot. The only trouble is that Rick is still harboring both bitterness and love over the long ago incident. He bans his piano player, Sam, to ever play the couple's favorite song, "As Time Goes By," and seems not to have found another woman to replace the one he's lost. As the movie begins, he's just "thrown away," as Captain Louis Renault describes it, Yvonne.

Suddenly who should walk into Rick's Américain Cafe and back into his life but Ilsa Lund, now accompanied by her husband, the hero of the Czech underground, Victor Laszlo. The couple is attempting to find an exit visa to escape to Portugal and on to the US, documents, it appears, that will not be found—until Ugarte shows up at Rick's bearing two letters of transit, stolen, evidently, from German couriers.

Before the evening is over, Ugarte is murdered by the Vichy police, and Rick is in possession of the letters.

The dilemma at the center of this work concerns Rick's wounded pride and his inability to comprehend the situation of Ilsa, who was married to Victor even before she and Rick met, but had been told that he had died. Victor, having shown up alive just before Rick and Ilsa were to have left Paris, prevented (even if unintentionally) the illicit relationship to continue. Will Rick and Ilsa, whose love life is far more developed in the film than her marriage to the hero, be able to get back together, or are they doomed to separation? It is that question that propels the film forward to its satisfying end.

We never quite do know what Rick is planning to do. Indeed, Rick himself may not know until the very last moment. It all depends upon what kind of man Rick is, the neutral and uncaring cad Captain Renault perceives him to be, or the passionate and caring man of commitment? And, in that sense, there are two Ricks whom we encounter throughout the film, one a passive supporter of fascism, the other a soldier fighting for a good cause. While we may root for his selfish love, even enjoy him as we do Captain Renault for living without morals, we also hope that he can grow into the man of whom he gives us hints along the way, shown, most notably, when he rigs his gambling tables so that a young Bulgarian couple can obtain the funds to buy a ticket without the girl having to prostitute herself to Renault. Rick's relationships with Sam and his friendship with Carl, a member of an underground cell in Casablanca, also hint at his good side.

But his brooding anger seems to dominate as he falls into drunkenness, and, when he sells his cafe to Signor Ferrari, and, at the last moment, tells his friend Renault that he is planning to send Victor off without his wife Ilsa, we fear that he may be telling the truth.

As any seasoned filmgoer knows, however, such an action would be impossible, particularly during one of the worst years of World War II. As Laszlo prepares to board, he makes it clear that she must accompany her husband, an oft quoted dialogue that is worth considering again:

Rick: Last night we said a great many things. You said I was to do the thinking for both of us. Well, I've done a lot of it since then, and it all adds up to one thing: you're getting on that plane with Victor where you belong.

Rick: Now, you've got to listen to me! You have any idea what you'd have to look forward to if you stayed here? Nine chances out of ten, we'd both wind up in a concentration camp. Isn't that true, Louie?

Ilsa: You're saying this only to make me go.

Rick: I'm saying it because it's true. Inside of us, we both know you belong with Victor. You're part of his work, the thing that keeps him going. If that plane leaves the ground and you're not with him, you'll regret it. Maybe not today. Maybe not tomorrow, but soon and for the rest of your life.

Ilsa: But what about us?

Rick: We'll always have Paris. We didn't have, we, we lost it until you came to Casablanca. We got it back last night.

Ilsa: When I said I would never leave you.

Rick: And you never will. But I've got a job to do, too. Where I'm going, you can't follow. What I've got to do, you can't be any part of. Ilsa, I'm no good at being noble, but it doesn't take much to see that the problems of three little people don't amount to a hill of beans in this crazy world. Someday you'll understand that.

[Ilsa lowers her head and begins to cry]

Rick: Now, now... [Rick gently places his hand under her chin and raises it so their eyes meet]

Rick: Here's looking at you kid.

The question remains, however, where is Rick planning to go—having sold everything he owns—where she cannot go? If he's simply going to "join the fight" somewhere, why has he made his intentions so obvious, particularly in front of the Vichy captain, Renault, who predictably does report his actions to Strasser? It seems from several of Rick's comments that he simply plans on being arrested once the plane leaves the ground.

The writers distract us from this question, in part, by having Rick kill the German Major, freeing Louis to abandon his Vichy water and authority. In his refusal to arrest Rick, after a dramatic exchange of eye contact between the two, we recognize a hidden subtheme throughout the film, namely that Louis, although he is the worst of womanizers, is also in love with Rick.

He hints at it quite openly to Ilsa when she asks about the owner of the cafe:

Ilsa: Who is Rick?
Captain Renault: Mamoiselle, you are in Rick's! And Rick is...
Ilsa: Who is he?
Captain Renault: Well, Rick is the kind of man that... well, if I were a woman, and I were not around, I should be in love with Rick. But what a fool I am talking to a beautiful woman about another man.

Later, he tells Rick himself about Ilsa's questions:

Captain Renault: [to Rick regarding Ilsa] She was asking about you earlier in a way that made me very jealous...

Apparently, Renault is jealous of Rick for receiving Ilsa's attentions, but it might also be that Louis is jealous of Ilsa for Rick's interest in her.

Throughout the film, indeed, there is a deliciously funny—both humorous and strange—dialogue between the two men that, while not necessarily suggesting that they are gay, does oddly wed them. Louis' suggestion that Rick leave Casablanca, quickly shifts from his friend's journey to a statement of "our expenses." And with that linguistic transformation, by both giving up their pretenses of not caring and taking up with each other to travel to the free French forces in Brazzaville, they have, as Rick subtly describes it, begun something even more than what they previously had between them: "Louis, I think this is the beginning of a beautiful friendship."

Beautiful is not usually the kind of word you might apply to a friend, unless he is suggesting something other than the word he has chosen. And whatever he might be saying or not about his sexuality, Rick has suggested that two are clearly about to enter a world that is shared only by males. The fog rolls in just as both sets of couples begin their new, and "free," adventures.