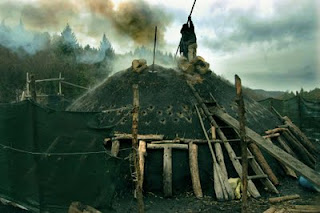 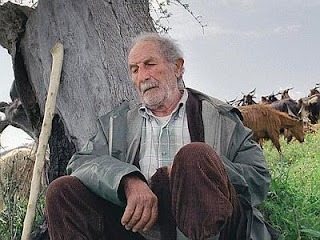 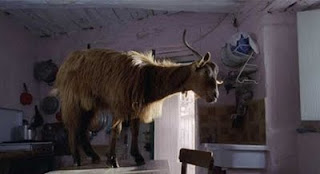 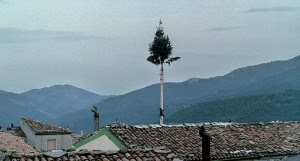 ASH TO ASH
by Douglas Messerli

Le Quattro Volte has sometimes been spoken of—quite mistakenly—as a documentary, or, at least, as a quasi-documentary. While it has a bit of that feel, and uses the locals of a small Calabrian village as its actors, it is a very carefully constructed tale, and must be understood as a kind of ruminative fiction if it is to work at all. As a documentary it would be merely coy in the way that I previously described The Story of the Weeping Camel. While many of the events are natural occurrences in the small Calabrian town, others are clearly staged and enacted only for the sake of the written and plotted story.

Frammartino's "story" is a truly a simple one—so simple that it is almost banal—about the cycles of life, and, in his Italian neo-realist method, he trods a path that is well worn. The film begins with a charcoal kiln, smoke pouring out from it into the land around, before focusing for a short period on the life of an elderly goat herder (Giuseppe Fuda), near death.

There is no recognizable speech in this film, no subtitles, and very little a human talk. The sounds belong mostly to the animal world and nature, as we follow the herder and goats into the hills about the town, and return back to the old man's simple living space. The goat bells, church bells, dog barks, and the old man's cough, along with the occasional engine of a truck, quietly spoken words on a street corner, and the bleats of the goats dominate the aural aspects of this film, that put together they create a kind of profound music.

Similarly, the action is simple, the camera tracking the voyage back and forth into nature while revealing the glorious landscape and the stony isolation of the town in the distance. The old man believes that the cure for his cough is to drink water filled with ash, and he purchases ash swept up from the floors of the cathedral by a cleaning woman, who blesses them before carefully wrapping them up in paper.

On our second trip with the man and goats to the countryside, we observe him sitting (perhaps relieving himself) before he turns to take the goats home. The attentive viewer will notice that the packet of ashes has dropped from his pants. And when he returns home, after gathering the up his snails who miraculously have escaped from their pot with lid held down a brick, discovers his loss. A trip to the cathedral in the night proves fruitless, and by morning we see him lying, near death, in bed.

Meanwhile other villages have gathered under his window to participate in a staged performance of Christ's journey to his execution upon the cross, many in costumes of the Romans and Israelites. The old man's dog guards his territory, goats and house, keeping several of the performers at bay, until a couple of costumed Roman soldiers attempt to chase him off.

Returning to his post, the dog, almost as if in revenge, removes a rock that keeps a small parked truck from sliding down the hill. The truck, now freed, rolls across the street into the gate of the goat barn, freeing the animals, who soon can be found everywhere in the old man's house, including upon his table and chairs. As the goats congregate, the old man dies.

In the next scene, the old man is laid to rest in a crypt, Frammatino forcing us to witness the closing of the grave from within.

Suddenly we view a kid being born, dropping from its mother's uterus, and over the period of a few more scenes, we watch the new goat in its surroundings within an even larger congregation of goats led by a different goat herder. We follow him as well as he takes out the goats and returns, only to repeat the pattern with the new baby goats included, the next day.

The small white kid, presumably a reincarnation of the old goat herder, becomes lost in the passage of the goats to a distant field, and after fiercely bleating as it searches for its mother, finally lies down exhausted at the foot of a great tree to die.

A huge storm rises, the wind blowing, the clouds roiling up, and when morning light appears, we see the whole valley covered with snow. The new kid surely would have been unable to survive.

A new "time" comes to the valley, the snow melted, spring has arrived. The tree is covered with ants and lichen. Villagers come to cut the tree down, carrying it into town, where, with great effort, they stand it up in the square, with packages tied to its top. After celebrating they let in fall again, several of the villagers scooping up the packages in celebration.

The tree is chopped into pieces and transported to the location where the film began. Carefully and painstakingly the workers build up a kiln of logs and sticks, covering it over with straw and tar before lighting it up once more to produce the charcoal which keeps the villagers warm. The ash pours out of the kiln over the entire valley, much of it obviously coming to rest once again on the cathedral's floor.

Frammartino's fable about the interconnectedness of peasant life is clearly sentimental, and, at times, I felt this film was unnecessarily manipulative. Yet the director presents these cyclic patterns with so much dignity and equal humor that ultimately his variations of human, animal, vegetable, and mineral interactions grow into something more meaningful. If nothing else, the film is a spectacularly beautiful, nearly surreal at moments, view into Calabrian life. The only professional used in the film, claims Frammartino, was the dog.