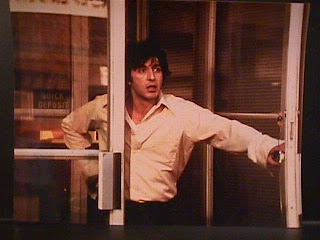 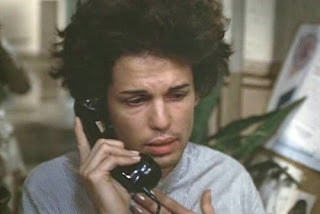 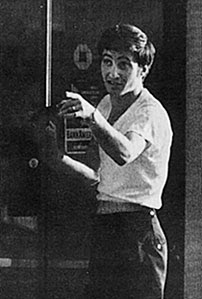 ANYTHING FOR LOVE
by Douglas Messerli

Sidney Lument's death this month, on April 9th, sent me back to review his 1975 film, Dog Day Afternoon, a work I remember with great fondness.

For the first half of the film, however, it appears that Dog Day Afternoon might be weighted down with the thematic concerns that are so dominant in his oeuvre, focusing on the moral, political, and social issues as in works such as The Pawnbroker, A View from the Bridge, Serpico, and The Verdict. These films are all admirable, and are well-directed. But for my taste there is something almost lugubrious about many of them, as they slowly uncoil, revealing their characters' moral fibre and the social conditions which define them. In some respects, many of Lumet's works never seem to be completely transformed from stage plays into cinematic creations, although that is precisely what I love about his Long Day's Journey into Night.
Dog Day Afternooon begins simply as a badly bungled bank robbery, with one young participant abandoning his cohorts even before the two central robbers, Sonny Wortzik (Al Pacino*) and Sal (eerily played by John Cazale) can notify the manager and tellers what they are undertaking. When they do demand to be taken to the vault, they discover that there is no money, it having just been picked up for deposit elsewhere.

The only takings that Pacino has for all his trouble are the teller's drawers, which he carefully empties, making sure that he does not pull all the bills out at once so that he will not trigger an alarm. When offered, by one teller, the wrapped new bills, he refuses, noting that they are marked. Yet for all his carefulness, he is soon called to the phone, where a policeman wants to talk to him, the bank having been already surrounded.

Suddenly we perceive the absurdity of the whole event. The inept robbers are now forced into a standoff with what appears to be, as Sonny later announces, "the fucking militia." Indeed, there are so many policeman, setting up camp across the street, blocking off cars, swarming the roof and the back of the building, and hanging from fire escapes that one would think they were responding to an international terrorist threat. Even though he is now forced to take the tellers and manager as captives, as he himself proclaims: "I'm a Catholic, I don't want to hurt anybody." Even the dense-minded Sal insists he doesn't smoke because "the body's the temple of the Lord."

Before long a large crowd has developed, and the movie appears that it will shift into a work dealing with police brutality, particularly when, on one of his sidewalk discussions with the police coordinator, Det. Sgt. Eugene Moretti (Charles Durning), Sonny invokes the Attica prison riots of 1971, when, after days of negotiations, police killed and caused the deaths of over 39 prisoners. Pacino, brilliantly over-the-top, whips up the crowd for his cause—and assured safety:

Moreover, when Lumet briefly inserts scenes showing Sonny's mother (hilariously played by theater director Judith Malina) and his overweight, beleaguered, and not very bright wife, we begin to fear that the film may attempt a psychological explanation for his acts.

But even early on, we suspect that the story has something important yet to reveal, particularly when, after being lied to by the Moretti, the two have the following interchange:

Everything soon shifts, in a delicious twist of reality, when we discover the wife Sonny has asked for the police to bring to him is another man, Leon Shemer (Chris Sarandon), and the reason for the bank robbery is Sonny's attempt to get enough money for Leon's sex-change.

Even stranger, it is not Sonny demanding the sex-change, who seems to be perfectly in love with Leon as two gay men, but the psychiatrist's idea:

LEON: I couldn't explain why I did the things I did. So I went
to this psychiatrist who explained to me I was a woman
in a man's body. So Sonny right away wanted to get me
money for a sex change operation: but where was he to get
that? 2500 dollars! My God, he's in hock up to his ears
already.

Before long the gays have joined the crowds surrounding the absurd standoff, Sonny becoming a kind of ridiculous folk hero in an era in which police were hated for their abuse. And Lumet has sent his film on a loony and, quite frankly, bravely outspoken path where I am sure some members of the original audience had not been prepared to go. One must remember that the only major American film that had seriously and openly dealt with homosexuality was William Friedkin's The Boys in the Band of 1970, a film so based on gay stereotypes that, even after I had served for a few nights as an usher during its New York run, Howard and I, along with other members of the newly formed gay liberation group at the University, picketed the film outside the Madison, Wisconsin theater where it was shown.

Lument was not only taking on the issue of homosexuality in Dog Day Afternoon, but transgender sexuality, and, even more complicated, the subject of bisexuality, since Sonny was also heterosexually married with two children! Yet Lument allows this subject to be treated seriously, by including the scene where Sonny dictates a will, leaving most of his money to Leon, with only a small amount going to his legal wife.

Even though he is, as he admits, "a fuck-up" and "an outcast," Sonny is also a caring and loving man. As he admits to Sal, "I got all these pressures!" and, at another point, "I got to have all the ideas!"

And strangely and absurdly, he takes those ideas to their logical extension, planning to use the hostages to get an airplane traveling, of all places, to Algeria! When asked to what country he might like to go, Sal replies, "Wyoming." We know, accordingly, that there can now be no turning back, and there will be no way of returning to whatever they might define as normality for these poor, sweet outcasts. The only element of the plot still unrevealed is whether the two will be brutally murdered or simply arrested.

Both happens, as the limousine driver pulls out a gun and shoots Sal, the police arresting Sonny.

In real life, John Wojtowicz served 14 years in prison for the attempted robbery. The $7,500 he received for the movie rights went to his lover, Ernest Aron, for the sex change. Aron became Elizabeth Eden, dying of AIDS-related pneumonia in 1987. Wojtowicz died of cancer on January 2, 2006.

Los Angeles, Easter 2011________
* I might note that there is a wonderful irony in Pacino's performance, for which he was nominated for Best Actor by the Academy of Motion Picture Arts. In real life, Wojtowicz and his co-conspirator Salvatore Naturile had seen The Godfather, in which Pacino also played, earlier in the day and planned their robbery based on events in the film. John Cazale performed alongside Pacino in The Godfather as Fredo.

Copyright (c) 2011 by International Cinema Review and Douglas Messerli.
Posted by greenintegerblog at 8:08 AM