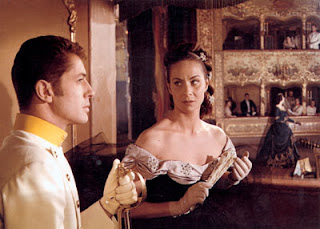 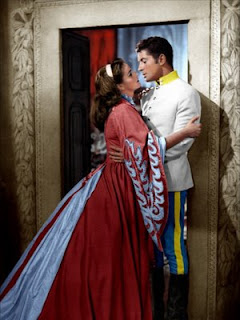 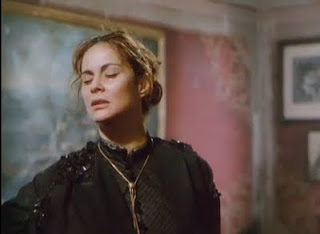 DETAILS OF THE EXPERIENCE
by Douglas Messerli

By an odd coincidence of Netflix timing, I saw this film, beautifully restored and recorded by Criterion, on the 145 anniversary, May 27, 2011, of the events that begin the film, a performance of Verdi's Il Travatore at La Fenice opera house in Venice. Wealthy and poor Venetians have gathered along with Austrian soldiers who control the city, as well as a few political provocateurs—relatives of the beautiful contessa Livia Serpieri—who shower leaflets demanding an end to Austrian rule and flowers in the color of the Italian flag upon the audience at the completion of Manrico's cry "To arms! To arms!" As soldiers attempt to suppress the agitators, words break out between an Austrian soldier, Franz Mahler (Farley Granger) and the countess' cousin, Robert Ussoni (Massimo Girotti), who challenges Mahler to a duel.

Frightened for Ussoni's survival, the countess (Alida Valli) seeks a meeting with the Austrian in an attempt to dissuade him from the duel, and is assured by Mahler that the event will not occur. At the close of the meeting she requests her husband to take her home, since she is not feeling well.

The source of this ill feeling, we already suspect, are the sensations aroused by the appearance and bearing of Mahler, whom we have already been told is the talk of Venice women. And soon after the two meet again, with unexpected and truly shocking consequences, as the countess wanders the streets of the violent city with the soldier all night. Any respectable woman would not dare to be out after curfew and would not possibly allow herself to be seen, yet the countess even goes further a few days later, when she shows up at the soldier's barracks in search of Mahler.

Despite her political affiliations, it is clear that countess Serpieri will abandon almost all of her values in search of love. Before long, the two spend days together in a small hotel, using her personal maid as an agent in her deceit.

Mahler, a seasoned paramour, is clearly less than an avid soldier, and seduces the countess partly through his seeming passivity and joy in "the details of the experience of love-making," the quiet beat of the wings of a fly or a moth and other small sensations. The countess, in her first true romance, abandons herself, instead, to the passion, almost losing consciousness in the act, and that is her continual dilemma: she has lost all sense of who and what she was. She no longer has a past.

When Mahler fails to meet her the next day, she again appears at the barracks, and is ready to reveal all to her husband. But the young man to whom she rushes, when told by the maid that someone has visited her, turns out to be her cousin, returned from exile, not Mahler. Her husband, who has followed, is accordingly relieved to discover someone he knows within rather than a stranger, a possible lover.

Ussoni gives her a box containing all the partisans' funds for safe keeping, as war between the Austrians and the nationalists, led by Garibaldi, breaks out. Ussoni and others lead the fight in the north. The countess and her household, meanwhile, retire to their country manor for protection. But the war has reached that area as well, Franz Mahler showing up her bedroom late one night.

At first, it appears that she has quelled her passion. "This is not Venice," she declares again and again, as if saying it were a incantation. Through trickery and deceit, however, Mahler wins her over, and before the end of the night has joined her in bed. The countess is now determined to hide Mahler in the granary, but when gunfire breaks out nearby, the men rush to see it better from the granary windows, the countess following in fear of her lover's discovery.

Mahler turns up again in her bedroom, having been served breakfast by her maid. We know the inevitable: to release him from the army and his need to leave her, the countess is willing to give up the partisan's treasure as a bribe for a willing doctor to declare Mahler unfit. The loss of those funds, indeed, ends with the Italian's defeat and her beloved cousin being shot.

Having now lost almost all self-worth, the Countess is utterly distressed when she hears, in a letter from Mahler, that she should not yet travel to Verona to see him. Determined to make the trip, nonetheless, she chances death, arriving in the city, exhausted and covered with dirt. At Mahler's apartment, she discovers a drunken sensualist in bed with a prostitute instead of her former hero. Mahler even recognizes himself now as a liar, a traitor, a cheat, and spits out his hate by calling attention to her blind abandonment of all and, most particularly, her loss of beauty and age.

Like a mad woman, she wanders the streets, finally reaching the Austrian army headquarters, where she reveals Mahler's deceit. The last images of Visconti's film show the formers soldier, hands tied behind him, being shot by his comrades.

As many critics have agreed, Senso does not just begin as an opera, but truly becomes one, sans singing and without major heroes. Visconti's characters are grand failures, the husband being an political opportunist, the handsome soldier a petty cad, the countess a deluded woman of the upper class. None are commendable. The heroes of this piece appear in the background, the Italian patriots, and fail in their efforts as well. Yet through his lush camera work, the layers of color revealing both the splendor and decay of this world, Visconti allows us to take in the details of the experience, immersing us in the sensations of sexual lust. It is probably that fact which kept this film from US shores for 14 years after its making, even that redone in English with dialogue by the ardent writers of decadence of the day, Tennessee Williams and Paul Bowles.