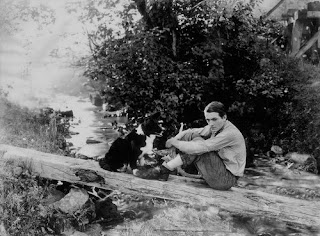 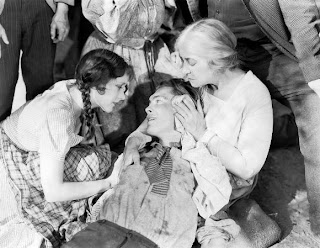 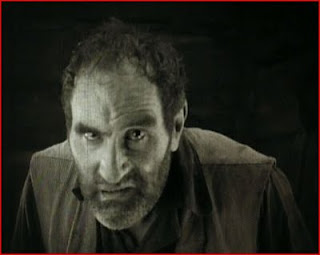 COMING AND GOING
by Douglas Messerli

Part of The Academy of Motion Picture Arts and Sciences “Summer of Silents,” Henry King’s silent film Tol’able David was shown on the evening of June 20th at The Academy’s Samuel Goldwyn Theater.

This film was originally scheduled as a D.W. Griffith production, but his involvement with Orphans of the Storm shifted his interest in the project, and actor Richard Barthelmess smartly bought the rights to the Joseph Hergesheimer story for $7,500, hiring Edmund Golding to write an adapation in which could star. Barthelmess also signed with Inspiration Pictures to produce the film. Although the new studio was owned by Charles H. Duell, it was run by the seasoned director, Henry King, born in Virginia, who, sensitive to the poor West Virginia families who the story represented, decided not only to take on the film but to rewrite Golding’s script. Choosing his new discovery, Gladys Hulette, to play the role of Esther Hatburn, King also brought musical comedy veteran Ernest Torrence onboard to play, oddly enough, the villain Luke Hatburn.

Filming in Crab Bottom, Virginia (now near Blue Grass), King stayed in the very hotel room where Hergesheimer wrote the story, and the local color of the area brought a sense of realism to the film that is seldom seen in silent productions of the era.

The story begins as an idyll of sorts, with the citizens the mythic West Virginia town living in a kind of peaceful Eden. The film is focused upon the Kinemon family, the slightly sickly father, Hunter (Edmund Gurney), the loving and hard-working mother (Marion Abbott), the eldest son, Allen (Warner Richmond), his wife Rose (Patterson Dial), and the youthfully beautiful mother’s boy, David. They live in near-perfect harmony with the wealthy landowner, for whom they farm, John Galt (Lawrence Eddinger) and their neighbors, Neighbor Hatburn (the photogenic Forrest Robinson) and his sweet daughter, Esther, who is the same age and obviously attracted to David.

Allen works also for Galt, driving a hack into town each day to pick up travelers, taking them to the next post where he picks up and returns with the mail. David would surely love to follow in the footsteps of his brother, and, at of the age where he is still a child but nearing adulthood, is, accordingly, the least satisfied member of the family. Although he does what children did throughout early 20th century rural American—swim in the local stream, play a harmonica, fish, ogle at his neighbor Esther, and secretly smoke a pipe while dreaming much of his days away—he is slightly dissatisfied with his role in it all, and therein lies the heart of King’s story, helping to make it something far greater than the simple “David and Goliath” soap opera that it pretends to be.

David, as his parents fondly describe him, is “tol’able,” meaning something they can tolerate, a passable, good boy who will eventually become an important figure, like his brother, in their community. But tol’able, in Southern dialect, also suggests something else—as in phrases such as “I cal'late the man who lost that blue bandanna wasn't a tol'able piece away when that knot was tied," and “He lef 'me a tol'able sum.”—suggesting something more that passable, perhaps even “significant” or “meaningful,” which is what David aspires to be. Like Frankie in Carson McCullers’ A Member of the Wedding and numerous other childhood tales, he is in that awkward age, torn between innocence and growing awareness of the world around him. Focusing on the dark-eyed Barthelmess, King transforms Tol’able David from a simple family feud or revenge tale, to a moving story of coming of age.

King immediately establishes the fact that David, in his innocence, is basically an obedient and law-abiding boy instead of a backwoods wild child as others might have portrayed him. His kindness and quietness, moreover, reflects back upon the family and his upbringing, and helps to make these rural folk more sympathetic, particularly in the later scenes where revenge is sought. Yet this boy-man gets into trouble several times, primarily because of his dog, Rocket. The first incidence is entirely comic, as the dog steals David’s pants from where he has left them beside the stream. His mad race after the dog to retrieve them results in an encounter with Esther, which thoroughly embarrasses him, helping to establish his youthful innocence against the more-knowing and slightly mocking Esther. If anything proved David was still a boy, it is this scene.

But the other times that Rocket runs afoul are far more dangerous. By this time their neighbor Hatburn has been visited by and his farm taken over by his three Hatburn cousins, an evil group of father and two near-idiot sons, who have escaped from prison with nothing but further evil in their heads. Luke, particularly, would rather destroy than see anything peacefully survive. King described the character to his actor, Torrence, by suggesting that he was the kind of man who would kill a cat simply to enjoy its suffering. Torrence was surprised, accordingly, when no cat appeared in the script; ad-libbing, King ordered up a cat, at which, when he first encounters it, the actor is ready to throw a large rock until he is distracted.

The later appearance of the dog, chasing the cat, draws David into the Hatburn yard, whereupon he is seriously threatened by the men, whose existence, presumably, he reports to his family. A few days later, the dog, riding on the hack with Allen, again chases the Hatburn cat, this time to be meaninglessly killed by Luke. Allen’s observance of the act, results in his threat to the Hatburns to return, a threat which, in reaction to, brings Luke to attack Allen as well, rendering him, as the word placards describe it, “helpless for life.”

Allen’s wife has just had a baby, and the tragedy is palpable and she sits nursing the baby beside Allen's bed. The whole family is consumed with grief, and as Hunter takes down his gun to seek revenge, he has a stroke, collapsing into death. Wildly, David takes down the gun from the wall, determined to battle the Hatburns alone, until his mother, dragging him down into the mud, makes it clear that he needs to stay home since he is now the only “man” of the house. While certainly melodramatic in tone, King turns this whole series of events into a moving tragedy.

The shocking news of David's new role creates perhaps more tension in the young teen than the feeling that he is still a boy. Without income the family must now move into town, to a small hovel, where they live on next to nothing. When David is eventually offered a job in Galt’s store, the young man gladly takes on the responsibility, but he is still unforgiving of the Hatburns, refusing to even speak to the innocent Esther.

The beautiful scene at the school dance, with Esther attempting to waltz with an ungainly young peer while David stands outside, staring in with longing, while he gradually moves into dance all by himself, is one of the most lovely of the film. Escaping the party, Esther encounters David, and they fall in love once more, this time consuming it with shy kisses, after which, when her father appears, David darts behind a tree.

When, the following day, the new hack driver arrives to work drunk, Galt is forced to allow David to take over the rig, David joyfully taking on the responsibility he has so long sought. But, as we all suspect, this will also mean an encounter with the evil Hatburns, still holed up in the Hatburn cabin. David easily delivers the travelers to their destination, but as he returns with the mail, the bag falls from the hack at a small ford just in front of the Hatburn farm.

Discovered by Luke, the bag is dragged it into the house with evil anticipation. When David discovers the mail missing, he retraces his tracks, only to realize where it has fallen, and is forced to face the Hatburn gang without even a gun.

It is in these last few scenes that King truly shows his cinematic mastery. As David confronts the Hatfields, Esther runs from the house, Luke running after. When she falls, he stands momentarily over her contemplating rape, just as David battles with and shoots the elder Hatburn with his own gun before facing off with the younger son.

Had King kept the camera on this endless struggle between good and evil, his film might have become not only unbelievable, but incredibly boring. How long can we watch an enactment of a fight? But the director cuts away again, this time to the store where David’s mother has joined others eagerly awaiting the mail’s delivery and the achievement she perceives it will define to the community. Among the awaiting citizens is the old Hatburn father, who has come to town to plead that the sheriff do something about his cousins, upon which he is told “the jail won’t hold them.”

Cutting again to the Hatburn farm, where Luke has been forced to release Esther in order to face off with David, the camera prepares for the final David and Goliath showdown; but again King follows in another direction, as Esther runs the entire way into town to report events, breathlessly announcing that David has been killed by the Hatburns. The citizens, finally fed up with the actions of the gang, join together in preparation to take justice into their own hands.

The final moments of the battle are brilliantly played out behind camera range, as finally that door of the rugged cabin is thrown open with David, seriously hurt, emerging, clearly the victor of the struggle within.

Against all odds, he crawls into the hack, mailbag in hand, and drives into town just at the moment its citizens are about to leave, closing the film with an image of movement in two directions, coming and going, signifying the unity of their new found hero, finally a grown man, with the formerly passive community in which he abides.

For years after, this tension between passivity and aggression will be at the center of American Westerns and other films of rural life.