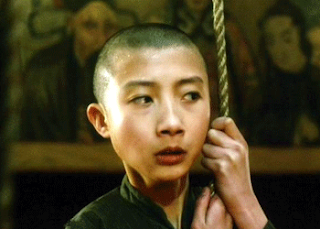 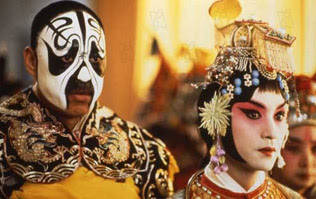 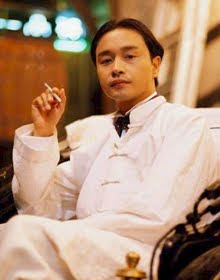 WHY DOES THE CONCUBINE HAVE TO DIE?
by Douglas Messerli

Although Kaige Chen’s 1993 film, Farewell My Concubine won the Cannes Festival’s Palme d’Or (tying with Jane Campion’s The Piano), and received generally favorable press in the US, some film commentators, even today, dismiss the work as overlong, psychologically vague, and as not having a story that can match the epic structure of the whole.

To me this seems to be a kind of blindness that arises out of a miscomprehension of Chinese cultural values and story-telling procedures. A film historian such as David Thomson, for example, may be literally correct in saying that “the characters are not truly revealed,” but that presupposes that the characters of this work have fully developed psychological beings, while the writers have gone out of their way to indicate that the students of the Beijing Opera had all psychological identity driven from them in their childhood and youth. The whole method of these opera performances, moreover, is about type and form rather than individuation and psychologically-motivated action. As master Yuan (You Ge) makes it clear after seeing a performance starring the two central figures of this work—Cheny Dieyi, nicknamed Douzi (Leslie Cheung) and Duan Xiaolou, nicknamed Shitou (Fengyi Zhang)—the proper way to perform the General’s role as he leaves his concubine, is to take seven steps away, not three as Duan Xiaolou has done. It is a work of tradition, in which there is no room for experiment.

The entire film, in fact, is a statement about the loss of identity, both gender and cultural. The individual is driven out of the unfortunate children studying with Master Guan (Qi Lü) with insistent violence in the form of beatings, whippings and forms of torture more severe even than those Charles Dickens might have cooked up. When Douzi’s prostitute mother first attempts to get her son into the opera school, she is immediately turned down when it is discovered that Douzi has a extra digit on one of his hands. Unable to keep the child in the brothel, she has no choice but to take up and cleaver and cut off one the child’s offending finger. It is the first of several acts that seems to reify the major platitude of the culture: “You can’t fight fate.”

Once Douzi has been permitted to join the company, he is beaten endlessly, primarily because he refuses to define himself as a girl—the operatic role his superiors have determined is best for this feminine-looking boy. The child stubbornly and emphatically refuses to say, “By nature I am a girl,” but ultimately has no choice as the tortures escalate, making him fear even for his life. He is forced to literally become a woman in order to survive, required to change his gender. After his first successful performance of the role, he is taken away to be raped.

It is no surprise, accordingly, that as he grows into adulthood, his relationship with Shitou is not only that of concubine to the other's General, but is that of a tortured lover to his/her best friend, who both have been advised to “Stick together until you die.”

Parallel to these personal dilemmas is the broader cultural picture, in which identity is determined time and again by the political scene. First, it is the war with Japan that requires any citizen of China to shun anything Japanese, disallowing Douzi and Shitou to even perform for the enemy. When Shitou is arrested by the Japanese, Douzi has no choice, so he feels, but to attempt to save him by performing at the Japanese general’s home. He/she saves Shitou, but his friend is outraged that he has given into the Japanese demands; and throughout the rest of his life, as the country's perpetual revolutions alter the political scene, Douzi will continually be branded a traitor.

So too does Shitou betray him by marrying, almost on a whim, a local prostitute, and creating a wedge between their performative and personal lives. Shitou may be able to separate the two, but as a man living in China performing as a woman and daily living as a homosexual, the beautiful Douzi cannot readily make that separation. He has, after all, been reconstructed by the culture long before the scenes in the film when Madame Mao’s Cultural Revolution attempts to do the same to every Chinese citizen.

Li Gong’s performance of that prostitute, Juxian—who, as one of the company members whispers, is a true “dragon lady”—is one of the great joys of this film, as she, little by little, binds her husband to her, eventually even forcing him to give up his career as an opera performer. Yet Douzi, in most respects, is her equal, a haughty and regal manipulator, a nasty and campy wit whose very glance (as he remains throughout much of the film in costume, with eyes radically made up demonstrate the concubines’ exaggerated sense of survival and power) withers those around him/her. Inevitably, the two, battling over Shitou, are drawn together as outside political forces overwhelm even the former opera member, and threaten to make Shitou also into another being. At one point, as we watch Douzi voyeuristically peering in their home as the couple make love, we come to understand just how he is wound up in the couple’s life, fascinated as he is by this powerful woman who has stolen his friend.

For his part, Shitou continues to care for and help his former partner, going so far as to spend hours with Douzi to help in his horrific attempts to overcome opium addiction. But as the Cultural Revolution threatens its severe punishments, Shitou again betrays, this time, both of his lovers, Juxian and Douzi, by revealing her past as a prostitute and Douzi’s involvement with the Japanese. The betrayal is truly unforgiveable, and both the “females” are quite explicably devastated by his acts. Although we do not know specifically how this has effected them, we can gather its force by the final scenes of Chen Kaige’s masterpiece.

The film begins and ends with a final performance of Farewell My Concubine, in which, in an act of both revenge and redemption, Douzi uses a real sword to kill his character at the end of the opera, thus ending his own bondage to a world that has stolen the being that he might have become, while answering his life-long question “Why does the concubine have to die?”