Terrence Malick | The Tree of Life 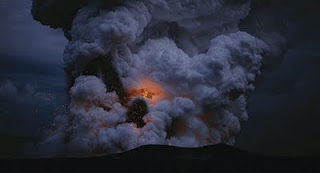 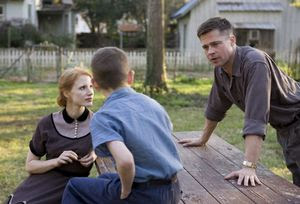 "There are two ways through life: the way of nature, and the way of Grace. You have to choose which one you'll follow"
—Mrs. O'Brien in The Tree of Life

Winner of the 2011 Cannes Film Festival's Palme d'Or and recipient of substantial critical praise to date, the movie I saw this past weekend was one of the most portentously pretentious paeans to American piety that I have ever witnessed. While one might certainly call Malick's The Tree of Life ambitious, the work was stretched so thin that its three parts almost snapped their sinews, leaving behind a tattered tale of the American dream of the 1950s.

Poor Jack O'Brien (Sean Penn), an extremely wealthy architect in (what I presume is) contemporary Houston, is in a funk, a real depression, conveyed from the moment he dresses for the office and continues while he drearily performs the tasks of his business day and prepares himself for his return home.

Companies are greedy, he quietly tells a cohort. The world is in a mess. Quite obviously, given the sleek high rise his company inhabits, he has been nicely rewarded for his greed. But we know already know through the first hurried scenes of the film that at the heart of his emotional problems is family life, most particularly the death at 19 of his younger brother, R. L., who appears to have died in the Viet Nam War. Malick's premise is that Jack has never completely come to terms with his brother's death, nor, so we later discern, with his own relationship to his father and mother.

Raised as a devout Christian (Roman Catholic), Jack is still unable to understand how a beloved creator can also destroy, how a caring parent can hurt their children. The film begins with a quote from Job, and God's torments of Job are repeated as a theme throughout. Jack's first cries (presented in voice-over) parallel those of numerous literary children, most notably the child in James Agee's poem "Knoxville, Summer of 1915," who puzzles that none of the beloved family around him can tell him "who I am." And how, moreover, can one ever come to comprehend one's own life without being able to reconcile a loving God with a destructive one? These are not stupid questions to be waved away, although they certainly have been voiced countless times. There are, of course, no answers for true believers. As priests and ministers have repeated over and over (and so do friends in this movie), "God acts in mysterious ways."

In order to explore this dilemma, Malick apparently feels he must take us back to the creation, and spends a long portion of his film with images from lush microbiological pictures, National Geographic-like spreads of oceans, Icelandic and Hawaiian volcanoes, marine life and other animals, and, finally, though his visual effects supervisor, Dan Glass, animations of dinosaurs, both preying upon others and in the throes of death. The publicity department described these scenes as not being narratively linked to the other parts of the film, and certainly there is some truth to that; but, in fact, it is clear that Jack must ponder these images—at least in his imagination—in order to comprehend the links of living beings. At least, this is what Malick seems to intimate. Unfortunately, the images he tosses out, while quite beautiful, in this cinematic context almost become kitsch, as Malick takes all those stunning scientific and geographical images and frames them, as if to say, here is my art. Do we really need to see frame after frame of whirling waters, fiery volcanoes, swirls of various early invertebrates and plants, and unconvincing animations of ancient animals, to comprehend that everything in life is interrelated, that there is, to use Malick's transparent symbol, a tree of life?

At least now the brooding Jack can focus on family itself, as the director turns his attention to Mr. and Mrs. O'Brien (the beautiful couple of Brad Pitt and Jessica Chastain) of Waco, Texas, beginning with their early years as a couple and growing a family of what eventually become three boys, Jack, R. L, and Steve. As in his other films, Malick works less through narratively conventional scenes than through a series of fast-moving images. As film critic Dave Kehr (in his 2011 collection of reviews, When Movies Mattered) describes Malick's Days of Heaven, so too might we characterize the director's approach to The Tree of Life:

Throughout the film, the director seems remarkably stingy
with his visual creations. A brief glimpse is all we are given of
a particular composition, and then Malick is off to something
else, rarely granting us the leisure to contemplate and assima-
late the images he puts before us. If this movie is a coffee
table book, someone is turning the pages too fast. For all the
languor of the plot, Days of Heaven plays like a taut, driven film,
relentless in its rhythm, hurrying the viewer along from image
to image, scene to scene, tableau to tableau. The dialogue
scenes, few and far between, are terse, clipped. Exchanges
seldom last longer than three or four lines, as Malick insists
on cutting away just as the characters seem ready to reveal
themselves.

For Kehr this creates a dynamic pattern or rhythm that makes for a graceful, moving film. And we must grant that Malick's approach is perhaps the best one for an exploration of childhood. For all we left as adults and, perhaps, all we can assimilate from childhood, is a series of glimpses of moments recalled or slightly perceived.

In one scene, in particular, I recognize the appropriateness of Malick's technique. An elderly man suddenly falls to the ground, suffering what seems to be a seizure, while in the foreground the mother draws her children to her, moving in the other direction, as if to protect them from what is probably the death of their grandfather. If we blinked we could miss the entire scene, but obviously Jack has subliminally witnessed it in a split-second that reminds us of another young child of cinema, from Carson McCullers' A Member of the Wedding, Frankie Addams' quick glimpse of boys sexually intertwined in an alley.

The trouble is that in shooting this glowingly-lit world of the 1950s, the camera becomes mannered, lingering endlessly on the strawberry-haired mother and the serious-minded music-loving father. The boys are all action, racing through the streets with sticks, cans, and other play toys with which boys have done battle since the beginning of time. In the fairly well-to-do neighborhood in which the O'Briens live, lights come on with a golden aura, children are called inside, and meals are served with formal pleasure. It is a flow of Norman Rockwell scenes that, at times, is so saccharine that I was afraid my teeth might rot. And, of course, there are trees, one tree in particular, that the camera, obviously flat upon the ground, looks longingly up at again and again and again.

I can assure you that in the 1950s small-town life was a sort of idyll. I lived, in many respects, with the same family as did Jack, with only superficial differences—a reversal of the characters of my parents, less participation in typical male behavior—during that same period. But I don't think I would want to impose that daily blandness upon anyone else. These may have been a magical "days of heaven," but gradually, as I grew older, they transformed into the days of hell.

Just as in that earlier film, Malick associates the shadowy figures of The Tree of Life with different natural elements. Mrs. O'Brien—a woman who believes less in nature than in grace, representative in the film of (who'd have guessed?) love ("Unless you love, your life will flash by," she tells her son)—is associated with water, as she sprays that element over the yard again and again, gracefully washing her feet in the pulse of the hose.

Mr. O'Brien—a would be musical artist, disappointed with his job, but determined to make the best of it, is tied to the earth, warning his son to make something of his life, continually insisting that he learn the simplest of gardening skills so that he might redeem their Eden. The impossibility of that redemption is what begins to transform him into a stern taskmaster, as simultaneously he turns his son against him and nature itself, the force he has chosen to obey.

That transformation, finally, is the most satisfying element of Malick's prose song to everyday American life. As one might not have perceived back then, the tensions between his parents, his secret witness of death and intimations of evil, ultimately begin to show up in psychological manifestations that include violence, breaking and entering, petty robbery, and even thoughts of patricide. He's on his way to becoming what we would have called a "bad kid." Disobedience clearly is the only way he can begin to define himself. In short, he associates himself with the element of fire, forging eventually the world of steel and glass he later inhabits.

In this rebellion he even comes to torture his beloved younger and more passive brother, a child who, like his father, is musically inclined, but gentler, lighter in manner, almost air-born, returned to them in the film's earliest scenes as a body borne by an airplane.

A temporary resolution comes in the form of the humbling of the ambitious father, as he loses his job, and they must move to another town or house. Father and son draw closer in the crisis, while his mother slides into silence. But the guilt of that childhood rebellion remains. Self-hate is inevitable, and we finally come to suspect it is what Jack describes as his life-long wrestling with his mother and father within that has brought this successful man to such a terminus.

The last scenes in Malick's film, while inevitable I suppose, are the emptiest, revealing just how vacuous is the director's vision. Exhausted by his memories, Jack plays out various Jungian tropes along with visions of an afterlife in a desert landscape, following figures of his mother, father, and brothers until he reaches a door frame through which, with some hesitation, he passes only to discover himself now walking a beach upon which the dead stroll in small groupings, greeting and holding one another with tenderness and love. To me it resembles something like a Mormon vision of the afterlife, a world into which I would never want to be reborn. But to Malick, clearly, it is a grand resolution to the questions Jack has posed: Who am I? Who is our creator? What is the purpose of life?

The film closes with an image of a bridge, connecting, quite obviously, Jack's past and present, while symbolizing his trip home to his possibly redeemed relationship.

Thinking back to my dismissals of the Coen brothers' approach to some of the same questions in their 2009 film A Serious Man, I now feel a little guilty; at least they had a sense of adolescent humor about it all. Malick is dead serious, and clearly doesn't give a damn about those of us who don't share his angst and ready-made solutions.

I am certain that those who desperately seek out this kind of spiritual reconfirmation, will love this film. If nothing else, one has to admire Malick for considering these issues and for presenting them in way that Hollywood producers might not have allowed. Yet, it seems to me that he might have been better served by an old-fashioned studio head shouting out, "Cut the crap!"


Posted by greenintegerblog at 9:12 AM