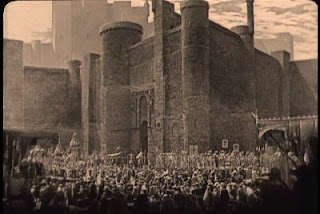 ANOTHER VERSION OF THE TRUTH
by Douglas Messerli

Far different from the enjoyable 1938 spectacular, The Adventures of Robin Hood, starring Errol Flynn, Allan Dwan’s 1922 silent film begins on the eve of Richard’s departure for the Crusades, and establishes a close relationship with the Earl of Huntingdon, later known as Robin Hood, and Richard before King John’s evil attempt at usurping the crown. In the later film, the Earl of Locksley (Robin Hood) has already established his Sherwood Forest group before the film begins, but in the earlier version, a larger portion of the film is devoted to the Earl’s development, including his sexual education. Huntingdon (Douglas Fairbanks) reports that he is “afeared of women,” as they chase the handsome knight, particularly when he out-joust’s Guy of Gisbourne (Paul Dickey). Indeed to escape the flock of pleading women, all desperate to award him their scarves, Huntingdon dives into the castle moat.

Richard (Wallace Beery), in this version is presented as a far more sensual being than is Ian Hunter’s more religious and monkish King in the 1938 version. We witness Richard’s hearty appetite at the very beginning as he launches into a mutton hock; and as the night’s celebrations progress he orders Huntingdon to find himself a woman, an unthinkable command in the later film. Again Huntingdon is bashful, modestly rejecting the women’s attentions until he glimpses Gisbourne stalking Maid Marian Fitzwalter. Springing into action, Huntingdon blocks Gisbourne’s path to her bedroom chamber, and when lauded by Marian (Enid Bennett) for his deed, suddenly finds himself falling in love.

So too is Marian a very different woman in the silent version from the damsel in constant distress in the Michael Curtiz and William Keighley swashbuckler. Here Marian is a stronger being: an artist her draws Huntingdon’s portrait from a silhouette the sun creates against a wall, she is also an outspoken figure, who will later report John’s evil doings to Huntingdon, and even speak out in support of the people of England to John. For her outspokenness John does not simply threaten to imprison her or marry her to Gisbourne, but condemns her to death. With her servant, Marian escapes on horseback, John’s men running in hot pursuit. But when they reach a small cottage, Marian’s companion calls their attention to a cliff, from which, she claims, Marian has fallen to her death. The trick works, and for much of the rest of the film Marian is free, hiding in a nearby nunnery.

Again, unlike the later film, in Dwan’s version Huntingdon joins Richard’s forces en route to the Crusades, and for a long while proves himself as one of the most capable of the King’s soldiers. But when he receives a message from Marian explaining that John has taken over and is brutally taxing and torturing the people, he comprehends that he must return to England, while keeping the facts from his King so that Richard can proceed in his “holy” task.

Huntingdon begs for permission to return, but Richard perceives it to be a cowardly desire, based on Huntingdon’s love. As a traitor, he is locked up in prison, and as Richard moves on, it becomes likely that we will lose our hero before he can accomplish anything, since John has sent along Sir Guy, whose orders are to murder both Richard and Huntingdon. Gisbourne sees to it that Huntingdon is fed nothing and left to starve. Fortunately, our hero is saved by his companion, and can proceed to England, transforming himself into the Sherwood Forest bandit, Robin Hood.

The 1938 film spent a great deal of time establishing the figures of Robin’s merry band of men, but here a multitude of men and women have already retreated to the forest before Robin’s return, and the relationship with him and each other is left vague. Indeed we see only a couple of their encounters with the Sherriff of Nottingham and with John. Dwan and his writer (Douglas Fairbanks himself) focus more intensely upon the two major figures, as Marian is discovered and forcibly returned to the castle for punishment, Robin rushing to her rescue.

Although Robin is a forceful battler, he is not the great swordsman or acrobatic escape-artist that Errol Flynn plays, and for a few minutes it appears that both he and his lover may be trapped. To the rescue, finally, come the army of Robin’s men, including, hidden behind a helmet, the returned Richard himself. John’s evil kingdom has finally come to an end.
I love the 1938 adventure film, but the silent version, in my thinking, is far more intelligent and believable. Despite the silent work’s early claim that it will depict a scene of “legend and chronicle,” its whole method of telling comes down more on the side of history (chronicle) instead of the legend. Certainly the marvelous castle scenes are something whipped up by the Pickford-Fairbanks studio in Hollywood, but the first time we enter the fortress we observe the chain bridge as it opens, falling toward our heads. And with that we recognize instinctually that despite its fantastical beauty, within its vast halls lurks real danger. Indeed, upon witnessing the vastness of the castle, Fairbanks himself must have sensed something fearful, since he was on the verge of cancelling the production. Between that castle and the realistic 12th century village of Nottingham, much of the set designed by Lloyd Wright, lies another version of the truth.

This movie, the first motion picture to have a Hollywood premier, held at Graumann’s Egyptian Theatre on October 18, 1922, was the apogee of Dwan’s notable career, which extended into the late 1950s.