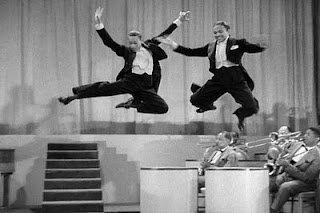 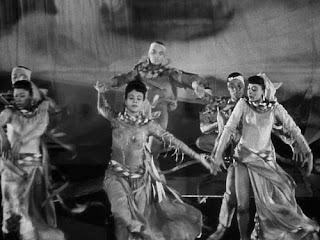 One of two major studio movies with all Black casts (the other being Vicente Minelli's Cabin in the Sky) Stormy Weather was packed with great performances by Lena Horne, Dooley Wilson, Cab Calloway, Fats Waller, and the great dancer, Bill "Bojangles" Robinson. But nothing in this heady concoction of music and dance can quite match the leg work of Fayard and Harold Nicholas. The two not only tap dance up and down stairs in near-perfect unison, but work as a linked duo, mirroring each other's movements in reverse, before jumping into the orchestra to leap from oval to oval (which recalls Robinson's "Drum Dance" elsewhere in the film), seemingly some of kind of gigantic music stands for the musicians.

Soon the tuxedoed duo hoist themselves up upon a piano, looking perfectly at home there, before they tap up a double staircase, and, in a series of leapfrogs over one another that land them each time in perfect leg splits, they again reach the bottom, coming together only to tap up the staircase once more, this time taking a slide down to the floor. The audience can only be wowed, and wonder how their torsos have endured their acrobatic maneuvers.

Fred Astaire has been quoted as describing this performance as "the greatest dance number ever filmed." Enough said.

Although Lena Horne's sultry rendition of the song "Stormy Weather" is at the center of this film, Katherine Dunham's dance with her company to the same song is worth viewing again and again. The dance begins in a rainy street scene where couples soon begin to jive; Dunham, however, seeming to be somewhere between a streetwalker and sleepwalker conjures up a balletic version, wherein she is quickly joined, in her dreamy imagination, by a whole company of men who lift the women in raptuous grasps before laterally holding their partners and returning them to the floor. The most notable aspect of this dance is the constant flow of the wind machine, which makes the silky costumes seem to be in eternal motion, which Dunham reflects time and again through the movement of her hands and fingers.

There is something a bit ridiculous with this, reminding one a little of the song "They're Doing Choreography" in White Christmas, but Dunham manages to take some Martha Graham-like gestures into the realm of sensuality.