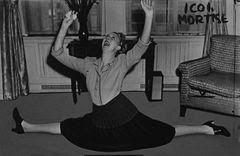 Sony Levien and William Ludwig (screenplay, adapted from the musical by Richard Rodgers and Oscar Hammerstein and based on the play Lynn Riggs), Fred Zinnemann (director) Oklahoma! / 1955

One of my favorite childhood musical memories is the exuberant "Everything's Up to Date in Kansas City" early on in Oklahoma! What begins merely as a comic number, with Will Parker (Gene Nelson) recounting his small town hick reactions to the big city, Kansas City, gradually is transformed into a statement of joy, camaraderie, and community through Nelson's and Greenwood's great dancing and Agnes de Milles' skill as a choreographer.

Much of the "action" of the scene lies dormant in its hunkering cowboys, Will among them to begin. But as he recounts the wonders of Kansas City, it is clear that he cannot for long remain still, particularly when they've built a building seven stories high and a dancing girl who has revealed that everything she had was absolutely real. The actual dance begins, innocently enough, with Will executing a two-step that has taken his world by surprise, supplanting the waltz! Although Eller (the long-legged, high-kicking Charlotte Greenwood) joins in for a few minutes, the cowboys don't like it.

When a few minutes later, Will taps out the first few steps of Ragtime, they like it even less. But the women are smitten, particularly two younger girls, and before you know it, they are cautiously attempting to join in. His cowboy friends, however, are still not convinced, and Will, accordingly, returns to the hunker, before, one by one, the men pick up the rhythms and try out the dance. Suddenly everyone is up and dancing, moving forward and away, backs to the camera, as Aunt Eller holds out her hands, in an iconic DeMille movement, that suggests that the community sensibility has prevailed. Soon there is a whole chorus of rag-timing, tap-dancing cowboys, which so thrills Will that he takes out his lasso skillfully stepping in and out of the symbolic circle it creates. In his ecstasy of the shared experience, he leaps upon a railroad car just as the train takes off. As in any good western, his horse comes to his rescue whereupon he is returned to his comrades and friends.