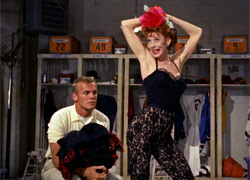 It is sad that the extremely gifted Gwen Verdon did not get to show her dancing talents in more films. On Broadway, she performed in some of the best dancing roles of her time, including Can-Can, Damn Yankees, Redhead, Sweet Charity, and, later in her life, Chicago. But the former wife of choreographer and dancer Bob Fosse, is absolutely memorable in her role as Lola in the film version of Damn Yankees, even if the film often leaves one with the feeling that something is missing. And her memorable “Whatever Lola Wants” dance and song has to be recognized as one of the great sexual numbers of film history.

There is something absolutely ridiculous about Lola, formerly the ugliest woman in Providence, Rhode Island, whom the Devil has transformed into a Cuban-like trollop, determined to get what she wants from every man she (and the Devil) desires to corrupt. Mock striping, as she dances, Lola writhes over the stolid body of ball player Joe Hardy (hilariously rendered by gay actor Tab Hunter), using his persevering figure as something close to a pole bar against, through, and across which she transverses, attacking him like a bull, waving her black negligee and clicking fanny, to negotiate what she presumes is the inevitable—his abandonment of moral values into absolute lust. The dance is almost an old-fashioned hoochie-coochie, but so sparklingly satiric in its conception that we can only watch in wonderment.

Of course, it doesn’t work: Hardy is in love with his wife, and the actor in love with men. But if ever anyone might have shaken up the opposite sex, it should have been Verdon as Lola; and later, in the lovely song and dance number, “Two Lost Souls”—almost as good as Verdon’s siren song— she nearly succeeds in unfreezing him.