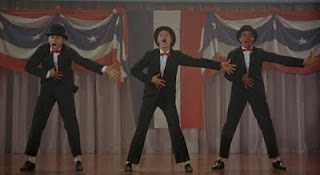 Although Carol Haney worked with Gene Kelly on the dance numbers in both of his great films Singing in the Rain and An American in Paris, and danced in the chorus of Kiss, Me Kate, her only starring role on film, as a dancer and actor, was in The Pajama Game. Sadly, her early death at the age of 39 did not permit her to show her skills in other roles.

In The Pajama Game’s “This Is My Once a Year Day” and, particularly, in “Steam Heat,” we recognize Haney’s immense talents. Dancing with two male dancers, Haney performs the latter number of hissing s’s with the controlled lateral slide and cool frenzy that parallels the lyrics.

Fingers spread and shaking somewhat like a tambourine—a familiar Bob Fosse trope—the three reveal that “steam heat,” even when they pour more cools on the boiler, is not enough to keep them hot. In their jerky motions they uniformly suggest their shivering desperation for love. Lifting their hats up and down, the trio gives the sense of moving train constantly changing in perspective as they slip to right and left. Near the end of this almost jittery dance, the two men collapse, skittering across the floor toward Haney as if they have finally blown their tops or boiled over.