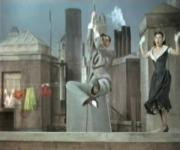 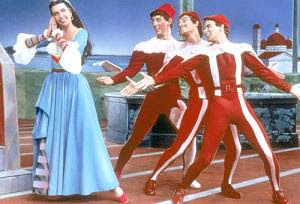 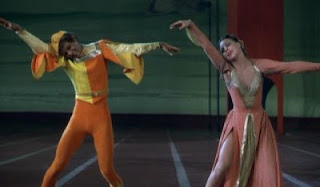 Dorothy Kingsley (screenplay, based on the book by Sam and Bella Spewack), Cole Porter (music and lyrics), George Sidney (director) Kiss Me, Kate / 1953

I have always felt that the film version of Kiss Me, Kate was a sort of mixed bag. The introduction of Cole Porter into the film as he tries out a couple numbers in Fred Grahm’s living room, and the abandonment of the great show opener, “Another Op’nin’ of Another Show,” framed the work like too many other film musicals, and missed the opportunity to display the open theatricality of the original. But then, there is something contradictory in the original as well, where the on stage personalities of the leads (in this case Katherine Grayson and Howard Keel) seem in their operatic style of singing and action in opposition to the other figures . Porter’s songs for them, as well, songs like “Wunderbar” and “So in Love” appear to be worlds away from the more sprightly numbers such as “Why Can’t You Behave” and “From This Moment On.”

Accordingly, the musical and film both seem almost divided in two, with a Shakespeare-coated operetta at one end, and a jazzy series of dances choreographed by Hermes Pan and Bob Fosse at the other. Although most of the songs are wonderful, the story and its structure, seems almost to break the piece in two.

But the dances are all so good that I might have chosen four great dance moments from this film instead of the two I’ve selected, the other two being Miller’s tap performance of “Too Darn Hot” and Miller’s and the chorus’ rendition of “Tom, Dick, and Harry.”

However, it is hard to match the dancing wonder of Ann Miller’s and Tommy Rall’s “Why Can’t You Behave?” in which she lovingly chastises him for his reckless behavior, while all the while he jokingly mocks her. The rooftop location of this scene, which literally flirts with “a loss of gravity,” is perfect, for the character clearly has no sense of gravitas. Indeed, when Miller reaches the roof she cannot, at first, locate her lover until he slides in from above down a pole which he has evidently previously shimmied up. It is the first of his gravity defying feats, as, the moment she finishes singing, he skips away, her tapping along, as he, spins like an ice skater, before somersaulting and cartwheeling off. A short rhumba between the two in which she plays out her frustrations in mock punches, butt kicks, and feet stomping, only sets him into a more irresponsible state as Rall dizzily dances at the very edge of the roof, imitating a near deathly fall before he leaps back to safety, catapulting himself up again and again (presumably with the help of a hidden trampoline) spreading his legs, and returning to the floor on his knees. Given Rall’s amazing acrobatic leaps one might almost be able to believe that he is propelling himself with his own leg power, instead of a piece of stretched fabric to help him spring back, except that had he truly fallen back to earth from the heights he reaches, he would surely have broken his knees. As it is, he makes a final leap onto another small construction before closing the piece in a balletic spin that seems for a few seconds it may never cease.

If the first dance belongs to Rall, the second, “From this Moment On” belongs to Fosse, who choreographed part of it. The dance is a celebratory one after the news of Kate’s marriage, which means her younger sister Bianca can now pick between one of her three suitors. Together with two other women (danced by Carol Haney and Jeanne Coyle) the male dancers don’t seem to care as much about the pairings of women, as they do in the joy of the occasion. Using the roman arches repeated throughout the set, the couples dance out separately or together several times, moving in lateral parallel patterns before shifting from front to back. After several of these arrivals and exits, however, Carol Haney dances out as the song changes rhythm from a zippy, upbeat song of new beginnings to a jazz-infused rhythm that works perfectly for Fosse’s moves.

After a few seconds of Haney moving across the stage, Fosse suddenly leaps out through the arch seemingly from the sky instead of the floor. As he catches up with the surprised Haney, he leaps to the small ledge of a post, allowing his face and arms to go limp in what would become a signature Fosse pose. Haney crawls toward him in a prone position before they join up again alternating between leaps and sweeps upon their knees as they move forward to close the piece.

Pan is a great choreographer, but by allowing Fosse to direct his first dance in film, he truly makes the piece fresh, and we absolutely do believe something has changed in all the characters’ lives.