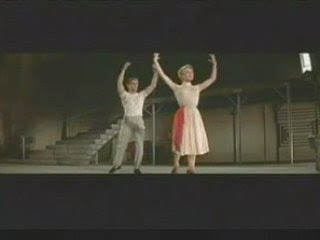 Only musical fanatics like myself would ever remember this mediocre musical, a film made to bring Betty Grable, through the choreography of Jack Cole, more into the musical mainstream, hoping to give her the kind of boost Cole did by teaching Marilyn Monroe her moves in Gentlemen Prefer Blondes and Some Like It Hot. I'm not, however, convinced of Grable's dancing skills.

Far more interesting to me is Marge and Gower Champions more ballroom dancing style in the lovely, almost non-musical performance of George and Ira Gershwin's, "Someone to Watch Over Me." It begins as a practice session, in which Marge is talking about a date she has that night, and wondering what color of a dress to wear. The two patter back and forth as they make the notable spins, parallel parts, and lifts that might be said to define the Champions' dancing style.

One lift, however, seems to be different, as the couples' lips come close to each other, and, still talking up a blue-storm, they try it again. Gower proclaims "It is different!" as we perceive that, for the first time he has noticed her as someone more than just a dancing partner.

Marge continues the conversation and the two carry out the requisite turns, lifts, and balletic runs—that is until suddenly they reach the staircase, the song which has quietly begun in the background, crescendoing while the two take off in a beautifully realized dance that basically defines their work. Evidently Jack Cole choreographed the number, even though Gower would serve that position in most of their pieces before and after.

I might have also chosen their wonderful, more jazzy, "Casbah" piece in Everything I Have Is Yours of 1952, if it weren't that the movie is so awful that I wouldn't dare send anyone to see it just for the sake of that dance, even if they could find it.