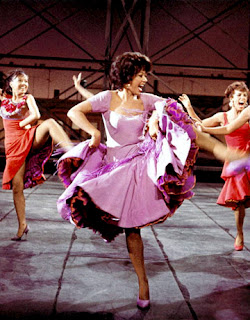 Ernest Lehman (screenplay, based on the libretto by Arthur Laurents, conceived by Jerome Robbins), Jerome Robbins and Robert Wise (directors) West Side Story / 1961

I might argue that West Side Story is the best film musical ever made. It's far tougher and thematically more challenging than two other favorites, Singing in the Rain or An American in Paris, and its music, singing, and dancing is at a level that is near impossible to compare.

When I say this, however, I always flinch a bit because the three major actors (Nathalie Wood, Richard Beymer, and Russ Tamblyn) are not up the quality of film overall. Wood is a brittle Maria, even with Marni Nixon's golden voice to back her up; and at moments it is entirely impossible to believe she has even heard of Puerto Rico. Richard Beymer (later an acquaintance of mine) is a handsome lead, but there's something slightly gangly about his performance, and, although he seems, at times, to be a fresh and energetic force, his overall acting is somewhat lethargic and even a bit effeminate. Russ Tamblyn, despite his dancing pedigree, is a tumbler, not a dancer; and his acting is difficult to endure.

For all that, the film is something of a miracle—what with two directors, the imperious Jerome Robbins and the far more accommodating Robert Wise. What tensions there must have been on the set do now show up in the film, from the brilliant opening sequence as we move from a seemingly abstract set of lines to a helicopter-pan of city of Manhattan, before settling down in the deteriorated streets (actually the location of what is now Lincoln Center, which waited its beginning construction until the film had finished shooting), to reveal a neighborhood basketball court, through which the finger-clicking Jets pass on their way to the street where Tony Mordante (Action)—in has to have been one of the most difficult dance maneuvers of all time—releases some of his pent-up energy in a dance move that ultimately effects the entire gang. That sudden transformation from a realistic series of actions to a group of dancing men signifies the powerful pulls of this film between utter realism and theatrical fantasy, which propels this "musical" into a new dimension. Even street-hardened young boys had to admit that Robbins' dancers were different from any other kind of screen-dancing of the day.

West Side Story has a multitude of such wonderful dance moments, but two numbers, in particular, are unforgettable. The first might not have even happened, it appears, if Stephen Sondheim had not been able to convince Robbins to restore the song to its original intentions in the story. Laurents, Bernstein, and Sondheim had originally intended "America" to be what it appears on film, an argument between Bernardo and Anita, between the male dancers and the female, in order to establish relationships that had not been explored in the libretto. In the stage version, however, Robbins saw it as an opportunity for a female dance number, so it was performed by women only, a new character, Rosalia being invented to take over Bernardo's role. A couple of years ago, in Laurents' Broadway revival of the musical, I saw it performed as it had been originally, and it had little of the dynamism and magic of the film version.

"America" spins out of a argument between Anita and Bernardo, quickly moving, with the haunting rhythms of Bernstein's huapango and through Sondheim's witty dialogue, into a battle between the five shark males and their five women. Suddenly Chakiris and two other males switch from their mock-battling antics, into a hand clapping fandago-like movement straight toward the camera, a few minutes later followed by Moreno and her five friends. Shooting from below foot level, the camera watches them on the move horizontally toward it, as if in their kicks and whoops they were a descending oppositional army—and they are! as again and again the two sides move toward one another, before the other breaks up and runs. It is a game, but it also a real war, not only between ideas—a commitment to America and a nostalgic longing for what has been lost—but between presence and absence, faith and defeat, reiterated in the final four last lines of the lyrics:

Although Anita and her female companions win out in the battle of wit and dance, absence and defeat will be the substance of the events of the rest of the musical.

The second dance number, "Cool," strangely enough, had a similar transformation from stage to film as "America." In the stage version, the song was almost lost, as it was sung near the end of the first act in the back of Doc's drugstore, as a way to for Riff to defuse the rising tensions of the Jets. Once again, on stage, the dance is unimpressive and almost meaningless, coming so early before the actual battles. Sondheim, so he reports in his voluminous Finishing the Hat, suggested that it be moved to the second act, after the rumble, replacing the more comic post-rumble number, "Gee, Officer Krupke." Robbins declared that he had no time to restage it, particularly since the sets had been determined. Fortunately (although Sondheim still has doubts about his own suggestion), in the film Robbins took the lyricist's advice. Sung, as it is, in a darkened garage with metal-lined low ceiling, the entire number takes on a completely different character, the set and location reinforcing the pent-up emotions of the gang.

Since Riff is now dead in the story, Robbins was able to feature the brilliant dancer Tucker Smith (Ice) as the lead. Tall and rugged, Smith literally towers over the other figures as he pulls them into the garage, demanding that they "get cool." The bright lights of the truck and car headlights against the dark make for a perfect backdrop to the series of leaps, spins, punches, floor crawls, and pirouettes that the Jets perform to the jazz refrains of the saxophone, trumpet, xylophone combo. Mordante and Feld are particularly excellent, but all, including the three female dancers, create a near frenzy of motion before settling into the "cool" frieze at dance's end.

Both of these dance numbers are spectacular, and show what a great choreographer like Robbins can do for a filmed musical. Just as importantly, both numbers still appear fresh and innovative today.