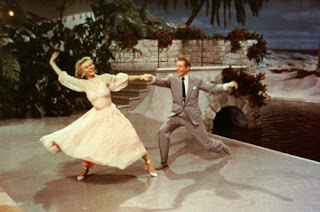 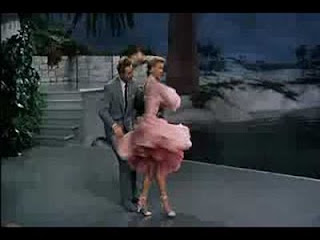 I am a particular fan of Vera-Ellen, in part because she worked in some of the best musicals of film over just two decades before withdrawing from public life. But in the second major song of White Christmas, "The Best Things Happen While You're Dancing," it's Danny Kaye, dressed in a blue-slate suit and matching slate suede shoes, who truly shines.

The dance begins just as another ends. Leaving the dance floor for the outside, the couple gradually move from the waltz to the fox trot as Kaye finishes the song's lyrics, and, crossing a small bridge whipped up, obviously, just for this piece, they use its metal posts for acrobatic swings, she moving out and around while he swoops higher over her petite body. An upside down canoe is the perfect place for the couple to tap out the fox trot beat, a short tap-dance version of the jazzy rhythms, before they execute—the music accelerating—a series of spins, lifts, and falls, Vera Ellen (playing Judy Haynes) ending with her body draped across Kaye's lap just as sister Betty Haynes (Rosemary Clooney), wondering where they have gotten to, exits the inside dance floor to discover them.

If Danny Kaye is usually goofy, his whole body awkwardly lurching forward and backward like a heap of jello, in this dance he is expertly solid and graceful, a romeo who has moved suddenly from the comic to romance. As he sings, "Even guys with two left feet come out all right if the girl is sweet."* He seldom got other chances to so clearly display his dancing talents.

*Unintentionally, those lyrics seem to be a strange comment on Kaye's personal life, wherein his loving and dedicated wife, Sylvia Fine Kaye, apparently permitted Kaye's reputed homosexual flings with actor Lawrence Olivier and others. Sylvia, who managed Kaye's career, was clearly for him a "sweet" woman.