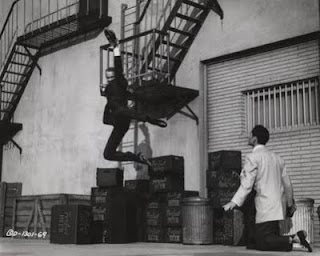 It is hard to imagine a more endearing dance couple than Bob Fosse and Tommy Rall. In My Sister Eileen—overall a weak film when compared with Leonard Bernstein's theatrical version of the same materials in Wonderful Town—the two become rivals, each trying to outdo the other in an attempt to woo Eileen (Janet Leigh). Fosse, playing Frank Lippincott is the counterman at the local Walgreen's diner, while Rall plays Chick Clark, a newspaper journalist. Their short dance together is an all-male ritual to see who's the fittest, like two rams butting heads or gorillas thumping chests.

The compact and lean Fosse has the edge, simply because of his ability to deliver sharp spins and turns, moving along an arc like a sliver of moon, hat in hand, a movement for which he has become well known.

Rall, a taller and just as lean dancer, occasionally appears a bit gangly in comparison, but for my taste his dancing, even more athletic because of his height, is more brilliant. His spins are perfect, with more rotation than Fosse gets. And his huge outstretched legs in his leap from one of the boxes in the alley where they wait for Eileen to return from an audition, is absolutely stunning.

There is no winner, of course, in this dance rivalry. Both are simply brilliant in their competitive moves. But while Fosse, mostly through his role as a choreographer, has become internationally famous, Rall has crept, undeservedly, into the background, despite his appearances in Kiss Me, Kate (along with Fosse), Seven Brides for Seven Brothers, Pennies from Heaven, and, on stage, Milk and Honey. Strangely, he is not even listed as a character in the credits for the DVD of My Sister Eileen, as if his role was played by a ghost. My film guides have repeated the error, wiping his name from the production. But one only need watch this scene to see how brilliant of a dancer he was.