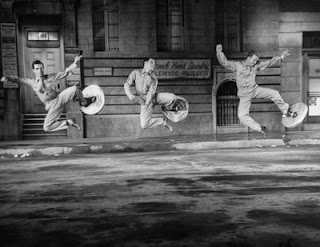 One of the most under estimated film musicals of all time, It's Always Fair Weather concerns the return home of three soldiers, their last night on the town in New York, and their reunion ten years later in the same city. Predictably they have grown apart in the interim, having taken on vastly different careers, with Ted (Gene Kelly) ending up as a down-on-his-luck boxing promoter, Doug (Dan Dailey) as an ulcer-ridden advertising man, and Angie (Michael Kidd) as the owner of a hamburger stand. Like Sondheim's Follies' showgirls they now all seem to live diminished lives from what they had imagined might be facing them that joyous night a decade earlier.

When Ted meets a girl, Jackie (Cyd Charisse), he falls in love, and behind his back she arranges for the three to appear on a television show together.

Audiences of 1955, many then fixated each night on their television sets, also did not like the bleak message of the script. But today the film seems to have a depth of meaning that many successes of the era do not. The film is also helped by several great song and dance numbers, two of which I believe are among the best of film dances.

The first, "The Binge," danced by Kelly, the often overlooked Dan Dailey, and Michael Kidd (known best as a choreographer, in films of Guys and Dolls and The Band Wagon) is an explosion of athletic movement, as the three soldiers, having left a bar drunk, take to the street. At first they are all so drunk they can hardly stand, as Dailey, in particular, manipulates his legs into a series of positions that makes him look more like a rubber Gumby than a man with ball-sockets. Kelly kicks Dailey, Dailey momentarily steps upon Kelly's ass, before Kidd is swept up upon Dailey's shoulders as Dailey-Kidd dance a quick rumba with Kelly and take to the street.

Stopping a taxi, the three move in an out, through doors, windows, and ceiling, joining up each time before returning to the endless intricacies of taxi hopping. No sooner do they finish that breathless scenario than they leap down the street, each attaching a trash can lid to his left foot, the three performing a seemingly impossible tap with metal lid, a stunning terpsichorean feat!

Finally, the three dance off down the street once more, reentering the dive to dance across tables and onto the bar itself before ordering up two more drinks.

Later, discovering that his new girlfriend, Jackie, likes him, Ted decides that he "likes himself" ("I Like Myself"), and decked out with a pair of roller skates (he has just exited a skating parlor), he skates through the streets as he croons the song. Before long, a crowd has gathered, as he begins to tap, gradually with greater and greater ferocity, alternating between curb and gutter, before closing with higher leaps in the center of the street until posing with Kelly's usual smiling face, hands out for the cheers of the audience. Pure hokum, brilliantly done.