Thornton Freeland | Flying Down to Rio 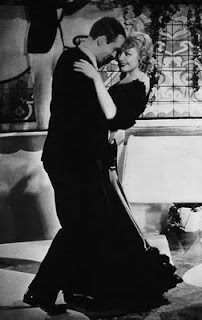 Erwin S. Gelsey, H. W. Hanemann and Cyril Hume (writers) based on a story by Lou Brock and a play by Anne Caldwell, Thornton Freeland (director) Flying Down to Rio / 1933

This film, Astaire's and Rogers' first pairing, would be hardly worth writing about were it not for some of the brilliant dance numbers by the famed duo, particularly in one of their first encounters in the Brazilian capitol, Rio de Janeiro. At a hotel nightclub the couple experience, for the first time, the local dance craze, the Carioca, "not a fox trot or a polka," where the couples dance forehead to forehead while rhythmically moving their feet in time to the nine note line, repeated before ending with eight off beats. Of course, after watching for a while, the American couple, both dressed elegantly in black, have to give it a try. The floor is cleared for their wonderful variations, at times—with foreheads locked—catching the off beats of music while, at other times, dancing stunningly in sync with the rhythm before Rogers spins off into a circle around her partner.

It's all lovely to watch until the couple, banging foreheads together, stagger off in opposite directions as they comically mock the dizziness they suffer (a trick Astaire would use brilliantly as a drunk years later in Holiday Inn). As they make their ways back to their table, a whole chorus of dancers, choreographed by dance director Dave Gould and his assistant Hermes Pan, follow in the style of Busby Berkeley, uniformly dancing in identical costumes and movements up and down the stairway while Etta Moten warbles out the song's lyrics: "I'll dance the Carioca 'til the break of day."