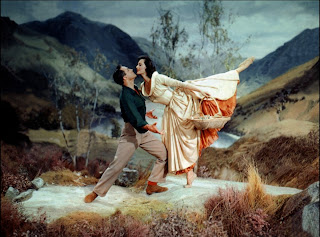 Although Cyd Charisse was brilliant as the gambler's dancing moll in the long "I've Got to Dance" routine in Kelly's Singing in the Rain, she is even more exciting as the restrained Scottish elder sister in Minnelli's Brigadoon, where she again pairs up with Gene Kelly.

Particularly in "The Heather on the Hill," where Kelly first sings the song's lyrics before the two break out into dance, we can sense Fiona's growing sexuality in the gracefulness of the long-legged Charisse's moves. The couple begin their duet as a tease, pulling on the basket in which she gathers heather (which in actuality was purple spray-painted sumac) and spinning like innocents before she begins her gentle run higher and higher up the hill.

We perceive even through their costumes—Kelly's beautiful ensemble of a emerald green silk shirt underneath which he wears a orange tea shirt, matched by his stockings and Charisse's pearl-white dress with an underlining of orange—that they are a perfect match. The dance itself soon tells us that as he seemingly effortlessly lifts her time and again, and after running forward and backward in reversing patterns, each gracefully lifts their entire bodies, one after the other, into the bough of a nearby tree.

There is a shyness about Charisse's balletic movements that perfectly fits her character and allows us to take in the scenery, loch and heather-covered hills, below where they dance. Minnelli and others wanted to film the scene on location in Scotland, but the studio insisted they do the entire shoot on the lot, which led some critics to later criticize it for its slightly staged, artificial look. Yet, so film-lore goes, the set was so realistically painted that several birds attempted to fly into it. Certainly the dance is magical enough that viewers may want to join them, leaping through the screen.