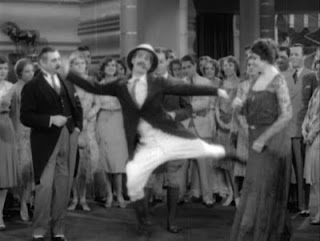 Looking back now on Groucho Marx's dance near the end of "Hello, I Must Be Going," we recognize just how physical the Brothers were. In many of their films, Groucho danced, in Duck Soup with two women at a time, alternating between a waltz, a rumba, a mad tango, and, finally, something like a Charleston—all of them containing dozens of other smaller steps that seem almost impossible to negotiate within the larger whole, including darting through the crowds from the arms of Margaret Dumont to the other woman.

In Animal Crackers, however, the dance is pure Groucho as the rubber-legged comedian first does a Michael Jackson-like "Moonwalk," moving laterally across the floor in two directions without lifting his feet. A moment later he kicks, his riding boots set against his white safari pants, in an up and backward movement as if he had no joints. From there he simply joyously sets out on a series of leaping kicks, sideways and forward that add fun to the ridiculous lyrics:

(Mrs. Rittenhouse)
For my sake you must stay.
If you should go away,
You’d spoil this party I am throwing.

(Spaulding)
I’ll stay a week or two,
I’ll stay the summer thru,
But I am telling you,
I must be going.

Groucho is a kind of naif dancer, a bit like the role Grandma Moses played in the world of art—except, of course, Marx is completely in the know, spoofing the very gracefulness of dance.