Walter Lang | The King and I 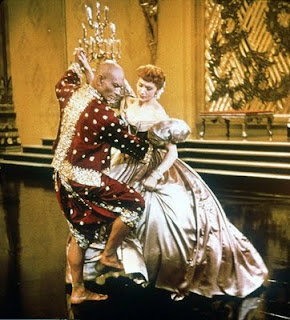 Ernest Lehman (screenplay, based on the musical by Oscar Hammerstein II and Richard Rodgers, based on the book by Margaret Langdon), Walter Lang (director) The King and I / 1956

I’ve seen the film musical The King and I dozens of times, and I still don’t know whether Yul Brynner and Deborah Kerr can actually dance, but in the case of “Shall We Dance?” does it matter? If this isn’t a great dance number, I have no way of defining the genre.

Dressed absolutely beautifully, he in a royal red open coat and matching jodhpur-like pants, all woven through with gold braids, she in a beautiful silk gown with many underlayers of bustle and skirts, the two began the dance with what has almost become a subgenre of dance numbers: one teaching the other how to do it (think of Barbara Streisand in Hello, Dolly! or the lesson in how to Cha-cha-cha given by July Holiday’s two friends in Bells Are Ringing). But it quickly shifts, as Brynner recognizes there is something different in their positions from the other waltzers he observed.

With that shift the couple spin away on an exhilarating “1-2-3 and” rhythm that takes them around the huge palace room again and again until they literally run out breath, only to have the King announce: again!

Over the years in amateur and professional productions of this work, I have seen dresses slip to the floor and the dancers nearly stumble, but never did I think it ridiculous or have I ever laughed. The joyful sense of liberation this performance gives to both the dancers and viewers is at the heart of why dance is such a profound experience.