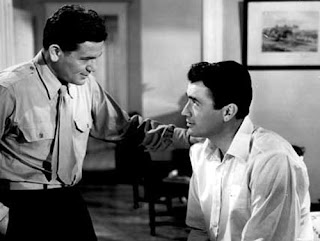 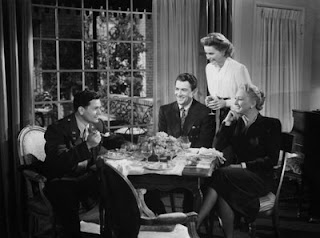 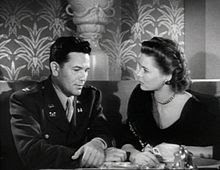 THE WRONG GIRL
by Douglas Messerli

I have watched the film Gentleman's Agreement more than a dozen times in my life, and have come to feel that it is one of my favorites. It brings out all my missionary zeal, and, following my parents' feelings, I have an intense hatred of anti-Semitism.

Watching it more carefully this past week, however, I realized, despite its overall excellence, that the film had a great many flaws, some of them perhaps fatal in their overall effects. The most obvious, of course, is the positioning of Philip Schuyler Green (Gregory Peck)—one cannot imagine a more waspish middle name—as its "hero." Green, assigned to write on anti-Semitism by magazine publisher John Minify (Albert Dekker), decides, after great skepticism about the piece, to "become" Jewish by ridding himself of his middle name and simply declaring that he is Jewish, Phil Green.

Phil Green: Ma, listen, I've even got the title, "I Was Jewish for Six Months."
Mrs. Green: It's right, Phil.
Phil Green: Ma. it's like this click just happened inside me. It won't be the same, sure, but it'll be close. I can just tell them I'm Jewish and see what happens. ....Dark hair, dark eyes. Just like Dave [his long-time Jewish friend]. Just like a lot of guys who aren't Jewish. No accent, no mannerisms. Neither has Dave.

Like journalist John Howard Griffin, who in the 1960s, chemically darkened his skin to pass as a black man, writing of his experiences riding the buses throughout the racially tense US South in Black Like Me, so Green "becomes" Jewish, as it were only a matter of declaration. And before he can even tell his girl-friend, Minify's divorced niece, Kathy Lacy (Dorothy McGuire), he begins to experience racial and social tensions. Before long he is suffering feelings, as he describes it to Dave Goldman (John Garfield), he has apparently never encountered before: "I've been saying I'm Jewish. ...It works too well. I've been having my nose rubbed in it, and I don't like the smell."

At one time in my early years, seeking for something I didn't have in my own family life, I wanted to convert to Judaism, but after about a day of thinking, I realized what I was most searching for, family traditions, a sense of community perhaps, had already passed me by, and what I would be left with was only the religion, the faith—which I find hard to maintain in any religious context.

Yet here, it is as if Phil Green can comprehend everything with very little experience. Except for a racial attack by other boys on his son, Tommy (Dean Stockwell), it is, in fact, the little things that most attract his attention. While Dave cannot even find a home for his family in New York, Phil goes about the city fighting mostly with his fiancée for having qualms about his decision, and raging against his secretary—whom he discovers is herself Jewish—for her disparagement of "the wrong Jews." The most serious thing that occurs to him personally is that he is turned away, when he enquires whether the hotel takes only Gentiles, from the famed Flume Inn, where he was to have spent his honeymoon with Kathy. While these offences, along with whispers and slurs, are certainly offensive and destructive, it is clearly Dave who has the real perspective.

Dave Goldman: You're not insulated yet, Phil. The impact must be quite a business on you.
Phil Green: You mean you get indifferent to it in time?
Dave Goldman: No, but you're concentrating a lifetime into a few weeks. You're not changing the facts, you're just making them hurt more.

Perhaps it is his utter humorlessness that betrays Phil most about his not being Jewish. At a party given by fellow journalist Anne Dettrey (Celeste Holm), Professor Fred Lieberman (Sam Jaffe in a stand-in role of Einstein), answers the question about anti-Semitism in a manner that Phil could never comprehend:

Professor Fred Lieberman: Millions of people nowadays are religious only in the vaguest sense. I've often wondered why the Jews among them still go on calling themselves Jews. Do you know, Mr. Green?
Phil Green: No, but I'd like to.
Professor Fred Lieberman: Because the world still makes it an advantage not to be one. Thus it becomes a matter of pride to go on calling ourselves Jews.

Accordingly, Gentleman's Agreement, in some senses, is doomed by its own righteousness. I suppose the nation would learn nothing if the information Phil Green shares in his magazine article might come from the pen of a Jewish person himself, but that is, after all, the whole problem. No one is willing to listen from the other side. Like Griffin's acts and publication, there is something inevitably paternalistic about an outsider revealing to the world what "insiders," the sufferers, have so long complained about.

Is it any wonder that both in the film and in reality, film producers such as Samuel Goldwyn and others attempted to discourage Darryl Zanuck from making the movie? Would it change anything? Certainly they, as Jews, had not previously been heard. It might actually cause harm.

The most serious flaw in this film, however, is not the crusading outsider hero, but the fact that that hero cannot evidently see that a man like himself, who supposedly has grown up under the guidance of his wise and saintly mother (the wonderful Anne Revere), is doomed by his infatuation with Kathy—an intelligent, but also rich, snobbish, and self-deceiving woman of great beauty. There is something always "pinched" about McGuire's acting, as if it hurts her to open up herself to others. That was certainly true in A Tree Grows in Brooklyn, where she played a hard-working mother inured to life's difficulties, but unable to enjoy the humor and zest of her musician husband. Later roles such as those in Three Coins in a Fountain and Friendly Persuasion continue to cast her as half-spinster and half-shrew, or at least "a scold." In Gentleman's Agreement she is perhaps softer, and she smiles quite sweetly from time to time.

But inside we still sense something unutterably cold. Her prejudice by silence is at the center of Phil's discoveries:

Kathy Lacey: You think I'm an anti-Semite.
Phil Green: No, I don't. But I've come to see lots of nice people who hate it and deplore it and protest their own innocence, then help it along and wonder why it grows. People who would never beat up a Jew. People who think anti-Semitism is far away in some dark place with low-class morons. That's the biggest discovery I've made. The good people. The nice people.

Anne Dettrey: Mirror, mirror, on the wall. who's the most brilliant of them all?
Phil Green: And what does the mirror say?
Anne Dettrey: Well, that mirror ain't no gentleman.

The viewer instinctively feels that she, who recognizes what a gentleman is or isn't, is the equal of Phil Green, someone who would fight for the right causes with him. Dettrey portrays this time and again, and even reveals her spunk by, as she puts, "laying her cards on the table," in an almost "catty" moment attacking Kathy and all she and her family stands for. I was convinced, and will continue to be by her arguments. Moreover, the very idea that Phil Green, his mother and son would be comfortable in Kathy's impeccably designed Darrien cottage, is inconceivable. There is absolutely no way that "Atlas," as Phil has been nicknamed early in the film—carrying the world on his shoulders, rushing this way and that, and stepping on everyone's toes—could for one moment sit comfortably in that fragile house!

Equally unbelievable is Kathy's sudden self-discovery, after a conversation with Dave, that her refusal to leave or comment on a dinner-table guest telling a disgusting anti-Semitic joke, is at the heart of the problem. Clearly it has taken her the whole film to comprehend what Phil has explained to her again and again.

At least, in allowing Dave and his family to live for a year in her Darrien house, while she moves in her with her sister next door—in order to make sure the neighbors treat them correctly—the Goldmans will be near their friends the Greens, and Kathy will be out of his life for a short while. Yet the story seems to indicate that Phil and Kathy will ultimately marry and settle into Shangri-La. Of course that will mean Phil's demise. Atlas can at last shrug.

For all that, the movie is still powerful and moving. Elia Kazan won an Academy Award for best director, and the film won for best movie. So powerful was its message that the nefarious House on Un-American Activities Committee called Zanuck, Kazan, Garfield, and Revere to testify. Revere refused, and both she and Garfield were placed on the Red Channels of the Hollywood Blacklist.