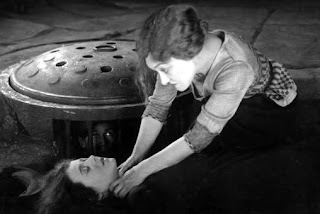 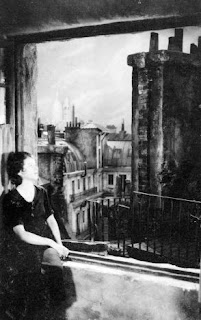 Long before Alfred Hitchcok's Rebecca and Leo McCarey's An Affair to Remember, Frank Borzage revealed that a tear-jerking melodrama can be converted into memorable cinema. All three are centered upon sensitive and dreamy heroes and weak—or at least in the case of Deborah Kerr's character—debilitated heroines in need of the heroes' love and support. Chico (a ridiculous name for the French sewer worker, played by Charles Farrell) is, as he declares, "an optimist," always looking up toward the stars, beautifully reiterated in the film by the camera's floor by floor perspective as he returns to his "penthouse" home. The far more moody, but just as hopeful Max de Winter of Rebecca, is looking for a life free of the past and a return to his youthful purity. Playboy Nickie Ferrante in An Affair to Remember is seeking to settle down and to engage in a creative endeavor, in his case painting.

On the distaff side (and I purposely use that old-fashioned word here, since all three films portray women in need of male love and nurture), poor Diane (Janet Gaynor) of Borzage's Seventh Heaven, unable to stand up to the tortures of her drunken sister, spends much of the early part of the film prone upon the Paris streets, unable to even move. In Rebecca the second Mrs. De Winter is so inconsequential, ill-at-ease in the world, and outright clumsy that she is not even given a name. Although in An Affair to Remember, Terry McKay begins as a successful night club singer, her accident renders her unable to walk, and for the rest of the film, she sits upon a wheelchair or couch, tethered by fears that her lover, if he discovers her condition, will grow to pity her and become entrapped in a unwanted relationship.

Of course, in all three, being romances, the lovers ultimately come together, and, presumably, live happily ever after, even if they cannot return, as in the case of Rebecca, to Manderley. The one big difference in Borzage's film from the other two, is that Chico and Diane, having nothing with which to support themselves, face a most uncertain ending. Although Diane, just happy to see that her husband has returned from war alive, declares that she will become the eyes for him in his blindness, the film does not explain how they will eat—unless the uncle who once promised his nieces a fortune if they could declare that they had been "good" girls, miraculously returns.

That seemingly small difference between the three melodramas represents a world of consequence, and transforms Borzage's weepy love tale into something far more dramatic and possibly horrific than even Judith Anderson as Mrs. Danvers can conjure up in Rebecca. Based more on stock character types of the 19th century than the later two films, Seventh Heaven presents a far more ruptured and depraved world than the other two. Like scenes out of Zola, the early sequences of Seventh Heaven manage to touch on drunkenness, prostitution, torture (by whipping and beating), starvation, suicide, and lying to the police, as well as the smug complacency of the better off. Borzage's film begins in the sewers with Chico and his partner literally racking the shit from the polluted waters near which they stand and, occasionally, fall into. Chico's great achievement is to become a street cleaner, an important step up in his brutal society. And it is that rise that brings him into contact with the suffering Diane.

While the later two films are ritualistically centered upon marriage, in Chico's world—far ahead of the moral conventions of mid-century—the two live together without marriage, and cannot find enough time to conventionally marry when war is declared and Chico called upon to serve. They symbolically marry by exchanging religious necklaces given them by a passing priest.

The war, as presented by Borzage, is nearly as horrific as that represented in All Quiet on the Western Front, and the viewer is convinced that the hero dies at the front. In the meantime Diane has had to ward off further attacks by her sister and the sexual advances of an officer. As the movie comes to a close, it appears that she will have no choice but to give in to the officer if she wants to survive.

The deus ex machina return of her Chico, blind but still living, may temporarily fulfill all the expectations of a romantic melodrama, but we can only recognize that in the world in which this couple lives, it is truly a "blind love" that cannot help them from their near-certain fates. There is only the possibility of a miracle given Chico's claim that he is "a remarkable fellow," who looks to the stars.

It is this paradox, as you might describe it, that gives Borzage's silent film a much more flinty and powerful edge than the others.